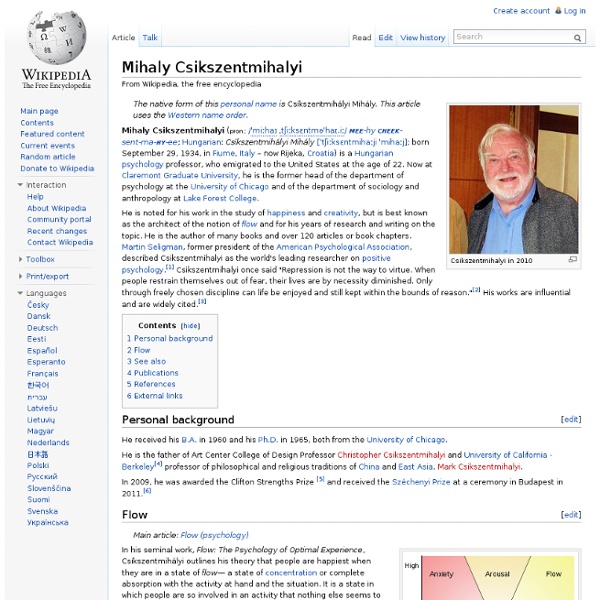 Mihaly Csikszentmihalyi (/ˈmiːhaɪ ˌtʃiːksɛntməˈhaɪ.iː/ MEE-hy CHEEK-sent-mə-HY-ee; Hungarian: Csíkszentmihályi Mihály Hungarian: [ˈtʃiːksɛntmihaːji ˈmihaːj] ( ); born (1934-09-29) 29 September 1934 (age 79), in Fiume, Italy – now Rijeka, Croatia, Europe) is a Hungarian psychology professor, who emigrated to the United States at the age of 22. Now at Claremont Graduate University, he is the former head of the department of psychology at the University of Chicago and of the department of sociology and anthropology at Lake Forest College.[citation needed] Work[edit] Personal background[edit] Csikszentmihalyi received his B.A. in 1960 and his PhD in 1965, both from the University of Chicago.[4] Csikszentmihalyi is the father of Art Center College of Design Professor Christopher Csikszentmihalyi and University of California - Berkeley[5] professor of philosophical and religious traditions of China and East Asia, Mark Csikszentmihalyi. Flow[edit] Motivation[edit] Publications[edit] See also[edit] Related:  mental health • Social sciences

Flow Psychology Flow (psychology) Concentrating on a task is one aspect of flow. In positive psychology, flow, also known colloquially as being in the zone, is the mental state of operation in which a person performing an activity is fully immersed in a feeling of energized focus, full involvement, and enjoyment in the process of the activity. In essence, flow is characterized by complete absorption in what one does, and a resulting loss in one's sense of space and time. Flow shares many characteristics with hyperfocus. However, hyperfocus is not always described in a positive light. Some examples include spending "too much" time playing video games or getting side-tracked and pleasurably absorbed by one aspect of an assignment or task to the detriment of the overall assignment. Just as with the conditions listed above, these conditions can be independent of one another. Ideas similar to flow have been recognized throughout history and across cultures. Schaffer (2013) proposed 7 flow conditions: Further, he writes: Notes

Facebook worth more than Portugal? Hell, it's worth a LOT more than THAT Worstall on Wednesday As an esteemed editor said, one not a million miles away from here, the fact that Facebook has commissioned a report showing what vast amounts of wonderful, beneficial economic activity it is responsible for indicates that the company in fact contributes nothing. Stands to reason, that does. And even once one allows for a certain cynicism on the part of the said editor it is actually true that this report is a great big pile of steaming effluent, one to rival the worst morning-after-an-overly-brisant-curry outrage. Not that the Wall Street Journal uses quite that language but the message is clear: “The results are meaningless,” Stanford economist Roger Noll said in an email. As I say, steaming, and of the brownest. Further, the things that they've added together as being benefits are not, in fact, benefits. GDP is the monetised value of all production, all income, or all consumption. So, in the GDP statistics Facebook's value is the advertising that it sells.

Helge Tennø (congbo) Meaningful Flow Engineering - some examples and possibilities In my previous post, I looked at how computer games and related technologies can operate as ‘motivation engines’. They can be designed to provide us with motivational paths to meaningful, longer-term goals that we may be unable to achieve otherwise. The goals may include the acquisition of skills, knowledge, enhanced consciousness, etc. Appropriately structured and tuned, games can enable us to move effortlessly and enjoyably towards these goals in a state of Flow. Games can do this by treating steps taken towards meaningful goals as progress in the game, by providing positive feedback for each step, and by matching the level of challenge with the level of the player. In this post I will provide some examples of games that are designed in ways that motivate achievement of serious goals. But it is also clear that these are very early days in the evolution of these kinds of games. So the examples also serve to demonstrate the enormous potential of meaningful computer games.

uk.businessinsider Sacred Indigenous Site in Mexico Threatened by Canadian Mining Company Every year, the Wixarika (Huichol) indigenous people of central west México walk 500 km to the sacred land of Wirikuta, where according to legend, the sun was born. Here, they collect jíkuri (peyote), carry out rituals of purification and come into communion with their gods, who give them blessings and guidance. In this way, they conserve their culture, maintain harmony with nature, and uphold a thousand-year-old tradition. Located in the state of San Luis Potosi, Wirikuta is one of the most biologically rich and diverse deserts in the world. To be sure, First Majestic Silver is not the first mining company to covet the mineral resources in the region. This same stage is now the backdrop for a social environmental conflict that is unfolding around First Majestic Silver’s intentions to reinitiate mining activities in the area. There is nothing extraordinary about this. First Majestic Silver is contributing to this notorious reputation. Photo from Flickr by benguez

Ataraxia "Ataraxia" (ἀταραξία, "tranquility") is a Greek term used by Pyrrho and Epicurus for a lucid state of robust tranquility, characterized by ongoing freedom from distress and worry.[1] Epicureanism[edit] For Epicureanism, ataraxia was synonymous with the only true happiness possible for a person. Pyrrhonism[edit] For Pyrrhonism, given that neither the sense impressions nor the intellect, nor both combined, is a sufficient means of knowing and conveying truth, one suspends judgement on dogmatic beliefs or anything non-evident. Stoicism[edit] Stoicism, too, sought mental tranquility, and saw ataraxia as something to be highly desired and often made use of the term, but for them the analogous state, attained by the Stoic sage, was apatheia or absence of passion.[3] See also[edit] References[edit] Jump up ^ "Dictionary.com". External links[edit] The dictionary definition of ataraxia at Wiktionary