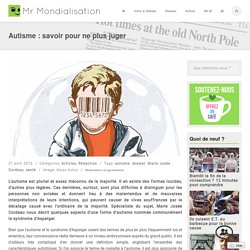 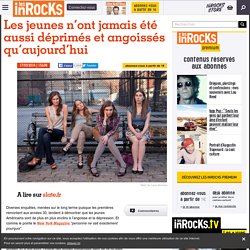 How Saying 'Everything Happens For A Reason' Hurts Grieving People Instead of Helping. Originally published on The Adversity Within and republished here with the author’s permission. 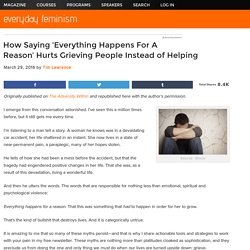 I emerge from this conversation astonished. I’ve seen this a million times before, but it still gets me every time. I’m listening to a man tell a story. A woman he knows was in a devastating car accident; her life shattered in an instant. She now lives in a state of near-permanent pain, a paraplegic, many of her hopes stolen. He tells of how she had been a mess before the accident, but that the tragedy had engendered positive changes in her life. And then he utters the words. 6 Things You Need to Know About Invisible Illnesses. Imagine being so frozen with fear and dread that you refuse to get out of your car. 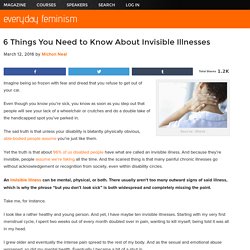 Even though you know you’re sick, you know as soon as you step out that people will see your lack of a wheelchair or crutches and do a double take of the handicapped spot you’ve parked in. The sad truth is that unless your disability is blatantly physically obvious, able-bodied people assume you’re just like them. Yet the truth is that about 96% of us disabled people have what are called an invisible illness. And because they’re invisible, people assume we’re faking all the time. And the scariest thing is that many painful chronic illnesses go without acknowledgement or recognition from society, even within disability circles.

An invisible illness can be mental, physical, or both. Take me, for instance. 3 Lies We Need to Stop Telling About ‘Negative People’ I remember vividly when one of my good friends from high school abruptly cut me out of her life. 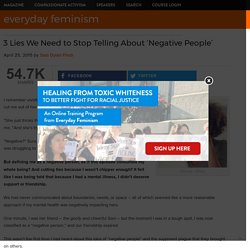 “She just thinks that you’re—like—a negative person,” a mutual friend told me. “And she’s trying to cut out negative people right now.” “Negative?” Sure. I was in the midst of a depressive bipolar episode, and I was struggling to keep my head above water. But defining me as a negative person, as if this episode consumed my whole being? We had never communicated about boundaries, needs, or space – all of which seemed like a more reasonable approach if my mental health was negatively impacting hers. One minute, I was her friend – the goofy and cheerful Sam – but the moment I was in a tough spot, I was now classified as a “negative person,” and our friendship expired. This wasn’t the first time I had heard about this idea of “negative people” and the supposed plague that they brought on others.

It’s reasonable – and often necessary – to cut ties with people who are abusive or toxic. 5 Warning Signs You May Be Suffering from PTSD. Originally published on The Huffington Post and republished here with the author’s permission. 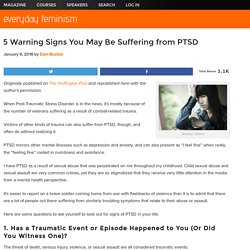 When Post-Traumatic Stress Disorder is in the news, it’s mostly because of the number of veterans suffering as a result of combat-related trauma. Victims of other kinds of trauma can also suffer from PTSD, though, and often do without realizing it. PTSD mirrors other mental illnesses such as depression and anxiety, and can also present as “I feel fine” when really, the “feeling fine” rooted in numbness and avoidance. I have PTSD as a result of sexual abuse that was perpetrated on me throughout my childhood. Child sexual abuse and sexual assault are very common crimes, yet they are so stigmatized that they receive very little attention in the media from a mental health perspective. Here are some questions to ask yourself to look out for signs of PTSD in your life: 1.

The threat of death, serious injury, violence, or sexual assault are all considered traumatic events. 2. 3. 5 Mental Health Lies That Might Be Keeping You From Getting Help. Originally published on The Huffington Post and republished here with the author’s permission. 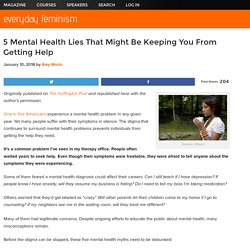 One in five Americans experience a mental health problem in any given year. Yet many people suffer with their symptoms in silence.