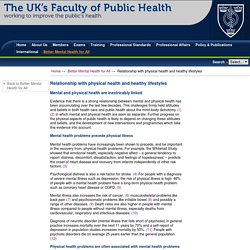 This challenges firmly held attitudes and beliefs in both health care and public health about the mind-body dichotomy (1) (2) in which mental and physical health are seen as separate. Further progress on the physical aspects of public health is likely to depend on changing these attitudes and beliefs, and the development of new interventions and programmes which take this evidence into account. Mental health problems precede physical illness Mental health problems have increasingly been shown to precede, and be important in the recovery from, physical health problems. 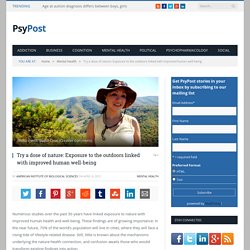 These findings are of growing importance: In the near future, 70% of the world’s population will live in cities, where they will face a rising tide of lifestyle-related disease. Still, little is known about the mechanisms underlying the nature-health connection, and confusion awaits those who would transform existing findings into action. In the June issue of BioScience, a group of biologists and public health experts led by Danielle F. Shanahan address this knowledge gap by examining nature through the lens of medical thinking. Their aim is to establish a basis for studying exposure to the outdoors in much the same way that a researcher would study a medicine, through dose-response modeling.

Nature exposure can occur in a variety of ways, from rural forest excursions to greenery viewed from an office window, and the differential effects of exposures require careful study. Thelancet. Health recommendations for the general population should not be discarded, but reframed as aspirational goals. 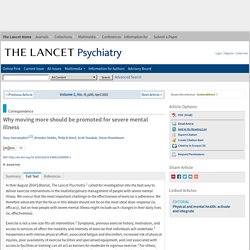 Small incremental improvements—sitting less and moving more—constitute real-world interventions to improve the health of people with severe mental illness. We declare no competing interests. Green spaces may boost wellbeing for city dwellers. New research published in the journal Psychological Science has found that people living in urban areas with more green space tend to report greater wellbeing than city dwellers that don’t have parks, gardens, or other green space nearby. 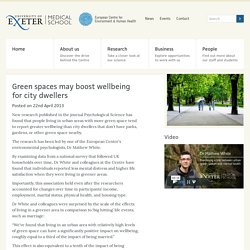 The research has been led by one of the European Centre’s environmental psychologists, Dr Mathew White. By examining data from a national survey that followed UK households over time, Dr White and colleagues at the Centre have found that individuals reported less mental distress and higher life satisfaction when they were living in greener areas. Importantly, this association held even after the researchers accounted for changes over time in participants’ income, employment, marital status, physical health, and housing type. Dr White and colleagues were surprised by the scale of the effects of living in a greener area in comparison to ‘big hitting’ life events, such as marriage: The full paper can be viewed here. Five steps to mental wellbeing - Stress, anxiety and depression - NHS choices. Evidence suggests there are five steps we can all take to improve our mental wellbeing. 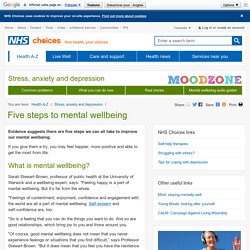 If you give them a try, you may feel happier, more positive and able to get the most from life. What is mental wellbeing? Sarah Stewart-Brown, professor of public health at the University of Warwick and a wellbeing expert, says: "Feeling happy is a part of mental wellbeing. But it’s far from the whole. "Feelings of contentment, enjoyment, confidence and engagement with the world are all a part of mental wellbeing. 10 Remarkable Ways Nature Can Heal Your Mind. People now spend up to 25% less time enjoying nature than they did 20 years ago. 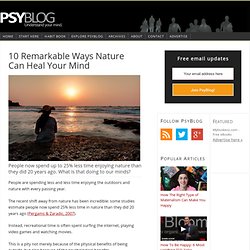 What is that doing to our minds? People are spending less and less time enjoying the outdoors and nature with every passing year. The recent shift away from nature has been incredible: some studies estimate people now spend 25% less time in nature than they did 20 years ago (Pergams & Zaradic, 2007). Instead, recreational time is often spent surfing the internet, playing video games and watching movies. This is a pity not merely because of the physical benefits of being outside, but also because of the psychological benefits. Here are 10 of the most remarkable ways in which being outside, in nature, can heal the mind. 1. Being inside all the time gives you a dead, flat feeling.

Being in nature, though, makes people feel more alive, which several studies have confirmed (Ryan et al., 2010). It’s not just about the extra amount of exercise people get when they’re in nature, it has its own special effect. 3. 4. 5. 6. About Us. New Start was launched as the UK’s first regeneration magazine in February 1999. 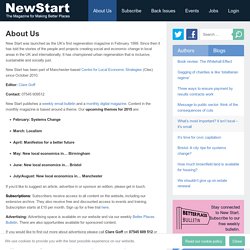 Since then it has told the stories of the people and projects creating social and economic change in local areas in the UK and internationally. It has championed urban regeneration that is inclusive, sustainable and socially just. New Start has been part of Manchester-based Centre for Local Economic Strategies (Cles) since October 2010. Editor: Clare Goff.