Psychology. Yale team discovers how stress and depression can shrink the brain. Related images(click to enlarge) Courtesy Yale University Major depression or chronic stress can cause the loss of brain volume, a condition that contributes to both emotional and cognitive impairment. 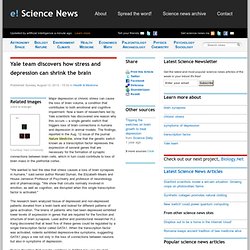 Now a team of researchers led by Yale scientists has discovered one reason why this occurs -- a single genetic switch that triggers loss of brain connections in humans and depression in animal models. The findings, reported in the Aug. 12 issue of the journal Nature Medicine, show that the genetic switch known as a transcription factor represses the expression of several genes that are necessary for the formation of synaptic connections between brain cells, which in turn could contribute to loss of brain mass in the prefrontal cortex.

"We wanted to test the idea that stress causes a loss of brain synapses in humans," said senior author Ronald Duman, the Elizabeth Mears and House Jameson Professor of Psychiatry and professor of neurobiology and of pharmacology. Source: Yale University. Faking insanity: Forensic psychologists detect signs of malingering. Illustration by Mark Alan Stamaty. 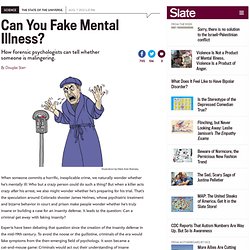 When someone commits a horrific, inexplicable crime, we naturally wonder whether he’s mentally ill: Who but a crazy person could do such a thing? But when a killer acts crazy after his arrest, we also might wonder whether he’s preparing for his trial. That’s the speculation around Colorado shooter James Holmes, whose psychiatric treatment and bizarre behavior in court and prison make people wonder whether he’s truly insane or building a case for an insanity defense. It leads to the question: Can a criminal get away with faking insanity? Experts have been debating that question since the creation of the insanity defense in the mid-19th century. Rosenhan experiment. Rosenhan's study was done in two parts. 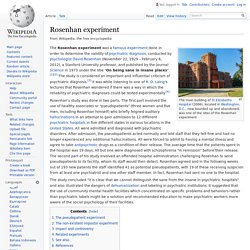 The first part involved the use of healthy associates or "pseudopatients" (three women and five men, including Rosenhan himself) who briefly feigned auditory hallucinations in an attempt to gain admission to 12 different psychiatric hospitals in five different states in various locations in the United States. All were admitted and diagnosed with psychiatric disorders. After admission, the pseudopatients acted normally and told staff that they felt fine and had no longer experienced any additional hallucinations. All were forced to admit to having a mental illness and agree to take antipsychotic drugs as a condition of their release. Why Some People Blame Themselves for Everything. People prone to depression may struggle to organize information about guilt and blame in the brain, new neuroimaging research suggests. 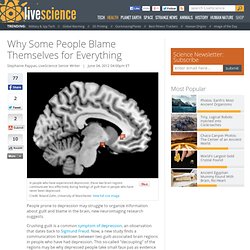 Crushing guilt is a common symptom of depression, an observation that dates back to Sigmund Freud. Now, a new study finds a communication breakdown between two guilt-associated brain regions in people who have had depression. This so-called "decoupling" of the regions may be why depressed people take small faux pas as evidence that they are complete failures. Health research : mood and intellectual performance. Creating False Memories. Elizabeth F. 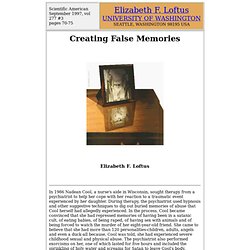 Loftus In 1986 Nadean Cool, a nurse's aide in Wisconsin, sought therapy from a psychiatrist to help her cope with her reaction to a traumatic event experienced by her daughter. During therapy, the psychiatrist used hypnosis and other suggestive techniques to dig out buried memories of abuse that Cool herself had allegedly experienced. In the process, Cool became convinced that she had repressed memories of having been in a satanic cult, of eating babies, of being raped, of having sex with animals and of being forced to watch the murder of her eight-year-old friend.

She came to believe that she had more than 120 personalities-children, adults, angels and even a duck-all because, Cool was told, she had experienced severe childhood sexual and physical abuse. When Cool finally realized that false memories had been planted, she sued the psychiatrist for malpractice. False Childhood Memories My research associate, Jacqueline E.

Imagination Inflation Impossible Memories The Author. Mental Health - Mental Health - extensive information about our publications in the field of mental health including psychiatry and clinical psychology. Stress Blocks Gene That Guards Brain Against Depression. Chronic stress appears to block a gene that guards against brain atrophy associated with depression, according to a study in rats that may help guide new treatments for mood disorders. 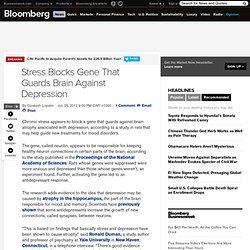 The gene, called neuritin, appears to be responsible for keeping healthy neuron connections in certain parts of the brain, according to the study published in the Proceedings of the National Academy of Sciences. Rats whose genes were suppressed were more anxious and depressed than those whose genes weren’t, an experiment found. Further, activating the gene led to an antidepressant response. The research adds evidence to the idea that depression may be caused by atrophy in the hippocampus, the part of the brain responsible for mood and memory. Scientists have previously shown that some antidepressants increase the growth of new connections, called synapses, between neurons. Neuritin Tests An estimated 9 percent of American adults are depressed, according to the U.S. Causal Link. Wildmind Buddhist Meditation - Learn Meditation Online. 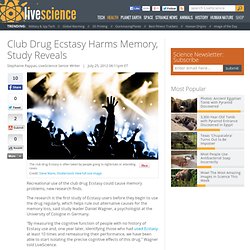 The research is the first study of Ecstasy users before they begin to use the drug regularly, which helps rule out alternative causes for the memory loss, said study leader Daniel Wagner, a psychologist at the University of Cologne in Germany. "By measuring the cognitive function of people with no history of Ecstasy use and, one year later, identifying those who had used Ecstasy at least 10 times and remeasuring their performance, we have been able to start isolating the precise cognitive effects of this drug," Wagner told LiveScience. Ecstasy, or MDMA (shorthand for its tongue-twister of a chemical name, 3,4-methylenedioxymethamphetamine) is a popular drug often taken at raves or techno clubs. In Europe, researchers estimate that about 5.6 percent of 15- to 34-year-olds have used the drug at some point.