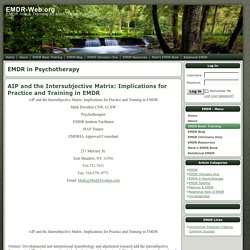 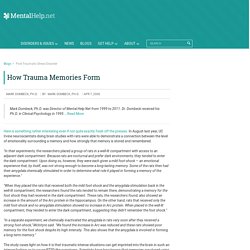 Dr. Dombeck received his Ph.D. in Clinical Psychology in 1995...Read More Here is something rather interesting even if not quite exactly fresh off the presses. In August last year, UC Irvine neuroscientists doing brain studies with rats were able to demonstrate a connection between the level of emotionality surrounding a memory and how strongly that memory is stored and remembered. "In their experiments, the researchers placed a group of rats in a well-lit compartment with access to an adjacent dark compartment. C-PTSD.ORG. Out of the FOG - Avoidant Personality Disorder. 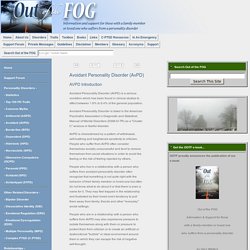 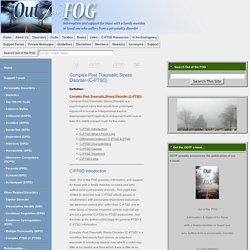 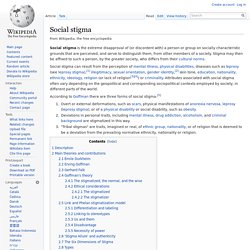 Attributes associated with social stigma often vary depending on the geopolitical and corresponding sociopolitical contexts employed by society, in different parts of the world. Infrahumanisation. Infrahumanisation (or infrahumanization) is the tacitly held belief that one's ingroup is more human than an outgroup, which is less human. 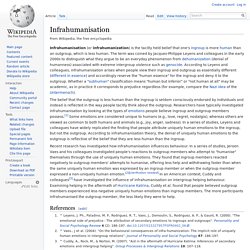 The term was coined by Jacques-Philippe Leyens and colleagues in the early 2000s to distinguish what they argue to be an everyday phenomenon from dehumanization (denial of humanness) associated with extreme intergroup violence such as genocide. According to Leyens and colleagues, infrahumanisation arises when people view their ingroup and outgroup as essentially different (different in essence) and accordingly reserve the "human essence" for the ingroup and deny it to the outgroup. Whether a "subhuman" classification means "human but inferior" or "not human at all" may be academic, as in practice it corresponds to prejudice regardless (for example, compare the Nazi idea of the Untermensch). Recent research has investigated how infrahumanisation influences behaviour.

Jump up ^ Leyens, J. Dignity. Moral, ethical, legal, and political discussions use the concept of dignity to express the idea that a being has an innate right to be valued, respected, and to receive ethical treatment. 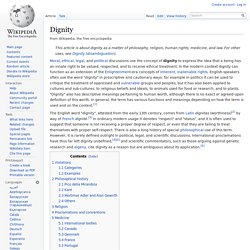 In the modern context dignity can function as an extension of the Enlightenment-era concepts of inherent, inalienable rights. English-speakers often use the word "dignity" in proscriptive and cautionary ways: for example in politics it can be used to critique the treatment of oppressed and vulnerable groups and peoples, but it has also been applied to cultures and sub-cultures, to religious beliefs and ideals, to animals used for food or research, and to plants.

Patient. A patient is any recipient of health care services. 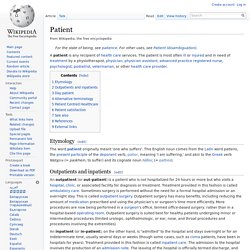 The patient is most often ill or injured and in need of treatment by a physiotherapist, physician, physician assistant, advanced practice registered nurse, psychologist, podiatrist, veterinarian, or other health care provider. Etymology[edit] The word patient originally meant 'one who suffers'. This English noun comes from the Latin word patiens, the present participle of the deponent verb, patior, meaning 'I am suffering,' and akin to the Greek verb πάσχειν (= paskhein, to suffer) and its cognate noun πάθος (= pathos). Patient. Abnormality (behavior) Abnormality (or dysfunctional behavior), in the vivid sense of something deviating from the normal or differing from the typical (such as an aberration), is a subjectively defined behavioral characteristic, assigned to those with rare or dysfunctional conditions. 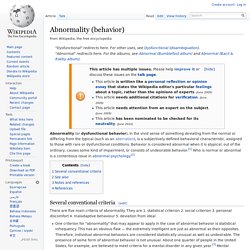 Behavior is considered abnormal when it is atypical, out of the ordinary, causes some kind of impairment, or consists of undesirable behavior.[1] Who is normal or abnormal is a contentious issue in abnormal psychology.[2] There are five main criteria of abnormality. They are 1. statistical criterion 2. social criterion 3. personal discomfort 4. maladaptive behaviour 5. deviation from ideal. Psychiatry. Initial psychiatric assessment of a person typically begins with a case history and mental status examination. 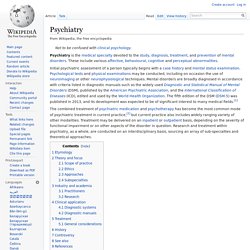 Psychological tests and physical examinations may be conducted, including on occasion the use of neuroimaging or other neurophysiological techniques. Mental disorders are broadly diagnosed in accordance with criteria listed in diagnostic manuals such as the widely used Diagnostic and Statistical Manual of Mental Disorders (DSM), published by the American Psychiatric Association, and the International Classification of Diseases (ICD), edited and used by the World Health Organization. The fifth edition of the DSM (DSM-5) was published in 2013, and its development was expected to be of significant interest to many medical fields.[1] Emergency psychiatry. Emergency psychiatry is the clinical application of psychiatry in emergency settings.[1][2] Conditions requiring psychiatric interventions may include attempted suicide, substance abuse, depression, psychosis, violence or other rapid changes in behavior.

Psychiatric emergency services are rendered by professionals in the fields of medicine, nursing, psychology and social work.[2] The demand for emergency psychiatric services has rapidly increased throughout the world since the 1960s, especially in urban areas.[3][4] Care for patients in situations involving emergency psychiatry is complex.[3] Individuals may arrive in psychiatric emergency service settings through their own voluntary request, a referral from another health professional, or through involuntary commitment. Definition[edit] Delivery of Services[edit] History[edit] Since the 1960s the demand for emergency psychiatric services has endured a rapid growth due to deinstitutionalization both in Europe and the United States. Schizophrenia. Schizophrenia (/ˌskɪtsɵˈfrɛniə/ or /ˌskɪtsɵˈfriːniə/) is a mental disorder often characterized by abnormal social behavior and failure to recognize what is real.

Common symptoms include false beliefs, unclear or confused thinking, auditory hallucinations, reduced social engagement and emotional expression, and lack of motivation. Diagnosis is based on observed behavior and the person's reported experiences. Genetics and early environment, as well as psychological and social processes, appear to be important contributory factors.

Some recreational and prescription drugs appear to cause or worsen symptoms. The many possible combinations of symptoms have triggered debate about whether the diagnosis represents a single disorder or a number of separate syndromes. Symptoms. Theory of mind. Definition[edit] Theory of mind is a theory insofar as the mind is not directly observable.[1] The presumption that others have a mind is termed a theory of mind because each human can only intuit the existence of his/her own mind through introspection, and no one has direct access to the mind of another. Egocentrism. Egocentrism is the inability to differentiate between self and other. More specifically, it is the inability to untangle subjective schemas from objective reality; an inability to understand or assume any perspective other than their own.[1][2] Egocentrism and absolutism differ in the sense that an egotist's opinion must always allow everything to center around themselves, while an absolutist can form an opinion that does not center themselves, yet believes their idea and opinion is non contest.

Narcissism. Narcissism is a concept in psychoanalytic theory, introduced in Sigmund Freud's On Narcissism. The American Psychiatric Association has the classification narcissistic personality disorder in its Diagnostic and Statistical Manual of Mental Disorders (DSM). Narcissism is also considered a social or cultural problem. It is a factor in trait theory used in some self-report inventories of personality such as the Millon Clinical Multiaxial Inventory. Self-esteem. History[edit] Depression (mood) Self-pity. Empathy. Empathy is the capacity to understand what another person is experiencing from within the other person's frame of reference, i.e., the capacity to place oneself in another's shoes.[1]

Sympathy. Pity. Affection. A kiss on the cheek, forehead, nose, mouth or lips expresses affection. Anger. Anger or wrath is an intense emotional response. Often it indicates when one's basic boundaries are violated. Some have a learned tendency to react to anger through retaliation. Anger may be utilized effectively when utilized to set boundaries or escape from dangerous situations. Borderline personality disorder. Dissociative identity disorder. Although neither epidemiological surveys nor longitudinal studies have been done, it is thought DID rarely resolves spontaneously. Somatization disorder. Psychological trauma. Complex post-traumatic stress disorder. Treatment of Child Sexual Abuse. Sexual Abuse Recovery. Sexual Abuse Help: Where to Find It. What is Child Sexual Abuse? What is Sexual Assault? Date Rape Drugs: Types and How Date Rape Drugs Work.