Mental health here and there 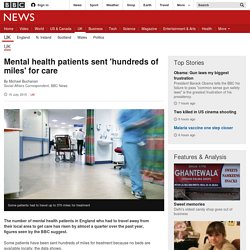 Some patients have been sent hundreds of miles for treatment because no beds are available locally, the data shows. The online journal Community Care sent Freedom of Information requests to all 56 English mental health trusts. NHS England said it was determined to improve mental health services. The Royal College of Psychiatrists said delayed discharge and poor social care were exacerbating the problem. Data from 37 trusts that responded showed there were 4,447 patients sent out of their area for treatment in 2014-15 - up 23.1% from 2013-14, when 3,611 patients were sent out of their area. There was also an increase in the cost of caring for these patients - from £51.4m in 2013-14 to £65.1m in 2014-15, figures from 29 trusts showed. Eating disorder patients' lives at risk due to long waits for NHS treatment. The lives of people seriously ill with eating disorders are being put at risk because they have to wait up to three years for NHS treatment. 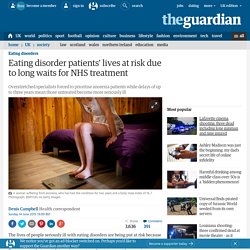 Is CBT for depression losing its efficacy? Cognitive Behavioural Therapy (CBT) has many advantages for treating depression. 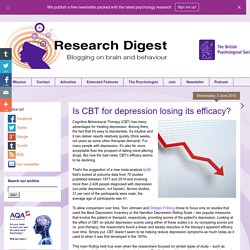 Among them, the fact that it's easy to standardise, it's intuitive and it can deliver results relatively quickly (think weeks, not years as some other therapies demand). For many people with depression, it's also far more acceptable than the prospect of taking mind-altering drugs. But now the bad news: CBT's efficacy seems to be declining. That's the suggestion of a new meta-analysis (pdf) that's looked at outcome data from 70 studies published between 1977 and 2014 and involving more than 2,426 people diagnosed with depression (uni polar depression, not bipolar). Across studies, 31 per cent of the participants were male; the average age of participants was 41. This main finding held true even when the researchers focused on certain types of study – such as analysing only those that involved a control group. Mindfulness: an effective mental health treatment but not a panacea.

It may be an ancient Buddhist practice, co-opted and misrepresented by celebrity practitioners, but scientists and health practitioners have found that mindfulness has specific benefits for mental health patients. 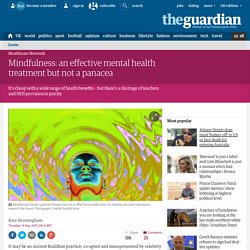 The medical profession, too, is beginning to take it seriously. Consultant psychiatrist Dr Florian Ruths explains why: “MBCT [mindfulness based cognitive therapy] is a powerful intervention –it isn’t fluffy or alternative. The MBCT course is based on solid scientific research, and Nice [the National Institute for Health and Care Excellence] has recommended it since 2005 for keeping patients with recurrent depressive vulnerability depression-free.” Doctors to withhold treatments in campaign against 'too much medicine' Doctors are to stop giving patients scores of tests and treatments, such as x-rays for back pain and antibiotics for flu, in an unprecedented crackdown on the “over-medicalisation” of illness. 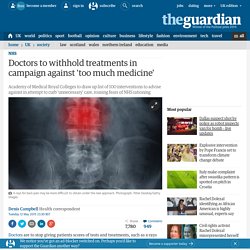 In a move that has roused fears that it will lead to the widespread rationing of NHS care, the body representing the UK’s 250,000 doctors is seeking to ensure that patients no longer undergo treatment that is unlikely to work, may harm them and wastes valuable resources. The Academy of Medical Royal Colleges wants to bring an end to a culture of “too much medicine” in which “more is better” and doctors feel compelled to always “do something”, often because they feel under pressure from the patient, even though they know that the treatment recommended will probably not work. Many patients with asthma, prostate and thyroid cancers, and chronic kidney disease already undergo “unnecessary care” because they are “over-diagnosed” and thus “over-treated”, the academy claims. The crisis in children’s mental health services: an NHS insider speaks. Duty calls: two hospital admissions for deliberate self-harm (DSH) during the weekend mean that the on-call clinician must cancel all regular Monday morning appointments in the busy inner-city Camhs (child and adolescent mental health services) clinic where I work. 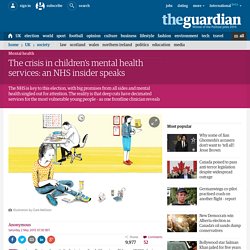 As well as being available to answer urgent calls, it is our responsibility – when on duty – to decide if children admitted to the local A&E after deliberately harming themselves can be discharged or need an inpatient admission. We have a staff bank of 25 for the clinic, many part-time, from a range of disciplines – psychiatry, psychology, psychotherapy, family therapy and nursing – to provide specialist mental health services for children and support to parents and carers. Like similar services across the country, we find ourselves facing a dramatic increase in demand for our services, and a steep rise in the complexity and severity of our cases. “How can it not? Mental Illness: How to Spot Fact from Fiction. As the saying goes, all good things must come to an end. 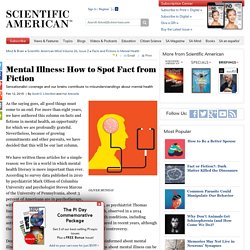 For more than eight years, we have authored this column on facts and fictions in mental health, an opportunity for which we are profoundly grateful. Nevertheless, because of growing commitments and other pursuits, we have decided that this will be our last column. Youth mental health: is the government doing enough?

In our “Virgin voters” series, we listen to what young people and first-time voters have to say about the election issues that matter most to them. 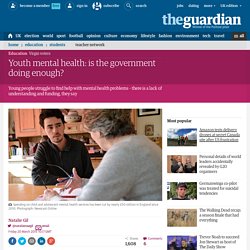 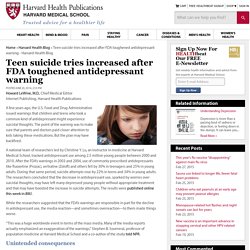 Food and Drug Administration issued warnings that children and teens who took a common kind of antidepressant might experience suicidal thoughts. The point of the warning was to make sure that parents and doctors paid closer attention to kids taking these medications. But the plan may have backfired. A national team of researchers led by Christine Y.

Lu, an instructor in medicine at Harvard Medical School, tracked antidepressant use among 2.5 million young people between 2000 and 2010. While the researchers suggested that the FDA’s warnings are responsible in part for the decline in antidepressant use, the media reaction—and sometimes overreaction—to them made things worse. Rikers: Where Mental Illness Meets Brutality in Jail. Continue reading the main story Video After being arrested on a misdemeanor charge following a family dispute last year, Jose Bautista was unable to post $250 bail and ended up in a jail cell on Rikers Island. 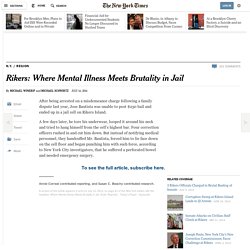 A few days later, he tore his underwear, looped it around his neck and tried to hang himself from the cell’s highest bar. Four correction officers rushed in and cut him down. But instead of notifying medical personnel, they handcuffed Mr. Bautista, forced him to lie face down on the cell floor and began punching him with such force, according to New York City investigators, that he suffered a perforated bowel and needed emergency surgery.

Mental health patient admissions to A&E set to reach record levels. The number of people with a mental health condition admitted to hospital as an emergency is likely to reach its highest level ever this winter, a former health minister has warned. An estimated 280,000 mental health patients will be admitted to hospital as an emergency in the last three months of 2014, latest analysis suggests as emergency doctors warned that overstretched A&E departments are the wrong place for people in mental distress. The government stopped publishing data on mental health treatment in A&E centres in 2012 but to estimate the scale of the problem Paul Burstow, who was a Liberal Democrat health minister until September 2012, requested a decade of figures from ministers which were then analysed by the consultancy firm Incisive Health.

Jamie Hacker Hughes on Twitter: "@peterkinderman @Keith_Laws @PsychiatrySHO @SameiHuda @Mental_Elf This needs to continued in journal papers and conferences not on #Twitter" Understanding Psychosis and Schizophrenia. A new report has been published today by the British Psychological Society Division of Clinical Psychology entitled ‘Understanding psychosis and schizophrenia: why people sometimes hear voices, believe things that others find strange, or appear out of touch with reality, and what can help’.

The report is being formally launched at a conference today in London. Girl, 16, with mental health issues held in police custody due to bed shortage. A senior police officer has claimed that a teenage girl with mental health issues was being held in police custody because there were “no beds available in the UK”. Paul Netherton, assistant chief constable of Devon and Cornwall Police, tweeted about the “unacceptable” scenario. Following Netherton’s comments, a spokesman for NHS England said that the girl would be moved on Saturday evening and that a “local place” had been found for her.

The spokesman added that she would be moved to a “place appropriate for her care”. Due to “patient confidentiality”, he said he would be unable to provide much more information. Netherton said the girl was detained on Thursday night while she was at Torbay Hospital after causing a breach of the peace. A diagnosis of ‘Strange and Inexplicable Behaviour’ Teachers left to pick up pieces from cuts to youth mental health servicess. As the headteacher of large primary school in the west of England, Joan Cunningham is accustomed to the demanding aspects of managing an intake from a mainly disadvantaged area.

However, for the past couple of years, she says, one issue has escalated so dramatically that it is nearly at crisis point. "There is so much more pressure on schools and teachers to deal with children's mental health and behavioural problems," she says. "We provide as much support as we can but, with fewer resources available and a massive increase in need … the pressure has been incredible. " Cuts to mental health and other services for young people mean teachers are increasingly having to fill the gap, even though schools do not always have the resources or training to provide the extra support pupils with mental or emotional issues may need. "It was already hard to access the right services before cuts but its getting worse," Cunningham says.

Politicians are becoming more aware of the scale of the problem. The scandal of common mental illnesses left untreated. Imagine you are the campaigns manager of a political party. You are aware of a public health crisis that, at any one time, affects a third of the population, reduces life expectancy as drastically as smoking, is more disabling than angina, asthma, or diabetes, and reduces GDP by around 4% each year. You know this crisis can be substantially – and cheaply – alleviated. Wouldn’t you make the issue a central theme in your election campaign? Not in the UK, it seems. The crisis in question is one of mental health, yet what our politicians propose to do about it remains unclear.

At the heart of Thrive: The Power of Evidence-Based Psychological Therapies is a bewildering conundrum. Frances Andrade failed by mental health services, says coroner. Children are suffering as mental health services fail to cope, say parents and teachers. Mental health care failures that cost young Ben his life. Earlier this year an inquest jury into Ben’s death recorded an open verdict but severely criticised the care he received while at Longreach House, a mental health unit run by the Cornwall Partnership NHS Foundation Trust. Two-thirds of Britons with depression get no treatment. The gap between treatment for mental health problems and physical illnesses is so huge that it may prove impossible to bridge, says Professor Simon Wessely. Photograph: Denis Closon/Rex Less than a third of people with common mental health problems get any treatment at all – a situation the nation would not tolerate if they had cancer, according to the incoming president of the Royal College of Psychiatrists.

A son’s suicide that points to a failure in mental health care. Occasionally – very occasionally – three minutes on the Today programme can transcend mere words and, almost like a piece of music, convey both in what is said and what is not said a kind of totality. This morning, Adrian Strain spoke articulately, intelligently and movingly about his son Martin, his suicide, mental illness and the catastrophic shortcomings in the system. He buried his son yesterday, who was 34. Mental health care: where did it all go so wrong? Mental health patients sent 'hundreds of miles' for care - BBC News.