Login - FetLife. Daniel Amos - Photos du journal. Is Your Therapist Re-Traumatizing You? 15 Easy Things You Can Do To Help When You Feel Like Shit. Her mother doesn't get why she's depressed. So she explains the best way she knows how. How video games can teach your brain to fight depression. Photo illustration by Slate. 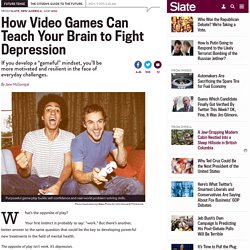 Photo by John Howard/Thinkstock. What’s the opposite of play? Your first instinct is probably to say: “work.” But there’s another, better answer to the same question that could be the key to developing powerful new treatments in the field of mental health. The opposite of play isn’t work. This idea was first offered up by Brian Sutton-Smith, a noted psychologist of play who died earlier this year. Sutton-Smith did most of his research long before the technological advances that allow scientists today to scan brains for evidence of blood flow patterns related to mental illness and well-being. In the past few years, multiple fMRI studies, including a seminal one conducted at Stanford University, have peered into the brains of gamers. Meanwhile, all video games—not just “educational” games—are designed to be learning experiences.

In other words: Video game play is literally the neurological opposite of depression. What makes this game hard? Your Mental Health is More Important Than Your Grades  Pursuing your degree? 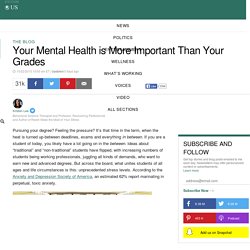 Feeling the pressure? It’s that time in the term, when the heat is turned up-between deadlines, exams and everything in between. If you are a student of today, you likely have a lot going on in the between. Ideas about “traditional” and “non-traditional” students have flipped, with increasing numbers of students being working professionals, juggling all kinds of demands, who want to earn new and advanced degrees. But across the board, what unites students of all ages and life circumstances is this: unprecedented stress levels. This isn’t the kind of stress that gives us enough juice to perform and stay on task (known as “eustress”). Mental Illness - Recherche Facebook. Mental Illness is the wrong scapegoat after mass shootings. By Amy Wolf | Dec. 11, 2014, 10:57 AM | Want more research news? 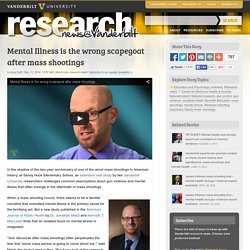 Subscribe to our weekly newsletter » In the shadow of the two-year anniversary of one of the worst mass shootings in American history, at Sandy Hook Elementary School, an extensive new study by two Vanderbilt University researchers challenges common assumptions about gun violence and mental illness that often emerge in the aftermath of mass shootings. Jonathan Metzl (Vanderbilt University) When a mass shooting occurs, there seems to be a familiar narrative that untreated mental illness is the primary cause for the terrifying act.

But a new study published in the American Journal of Public Health by Dr. How to Support a Partner Struggling with Depression. 4 Ways to Find Out If Your Partner Is Using Their Depression as an Excuse for Controlling Behavior. Mark Morford - Timeline Photos. Tips for a Depressed Introvert « A Feather of Truth. There is probably something terribly ironic about writing about depression while depressed. 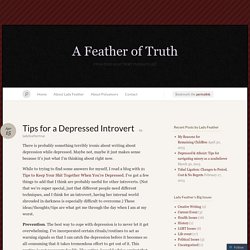 Maybe not, maybe it just makes sense because it’s just what I’m thinking about right now. While to trying to find some answers for myself, I read a blog with 21 Tips to Keep Your Shit Together When You’re Depressed. I’ve got a few things to add that I think are probably useful for other introverts. The Cuteness Matrix // Jealousy, Polyamory, Femininity. I’ve done a lot of thinking and praying and struggling and writing and reflecting and work on jealousy. 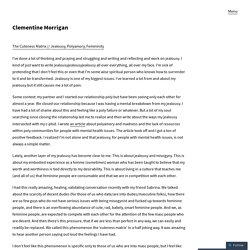 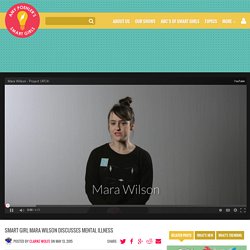 For as little as we talk about it publicly though, emotional distress is surprisingly common. Yet in spite of its prevalence, there is still a stigma surrounding it. However, writer, performer and previous guest on Smart Girls’ In Too Steep Tea Party! Mara Wilson wants to do something about that, so she created a video in partnership with Project UROK, an organization dedicated to helping teenagers who struggle with mental health issues.

In the video, Mara openly and honestly recounts her experience dealing with her own mental health issues including anxiety, depression and obsessive-compulsive disorder (OCD). Kimchi Cuddles - COMICS - season 1. When My Rapist Showed Up Under Facebook's People You May Know TabNewNowNext. How to Structure Your Days If You're Depressed. Illustration by Lucy. 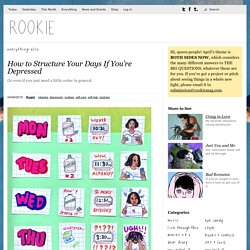 My daily structure—waking up early, daily showers, attending school—came undone with my mother’s death and my subsequent free-fall into depression. I lived in several apartments, all of which devolved into health hazards at alarming speed. My ex named my toenails “dragon claws,” and my fiancé christened them talons the first time we met. How to Structure Your Days If You're Depressed. What a Shaman Sees in A Mental Hospital - Expanded Consciousness. By Stephanie Marohn The Shamanic View of Mental Illness In the shamanic view, mental illness signals “the birth of a healer,” explains Malidoma Patrice Somé. 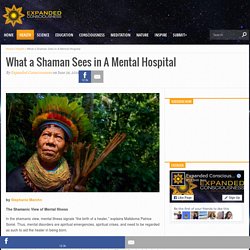 Thus, mental disorders are spiritual emergencies, spiritual crises, and need to be regarded as such to aid the healer in being born. What those in the West view as mental illness, the Dagara people regard as “good news from the other world.” The person going through the crisis has been chosen as a medium for a message to the community that needs to be communicated from the spirit realm. What It’s Like To Be In Love When You Have Depression. “No one will love you until you learn to love yourself” is an easy enough phrase to believe is true. 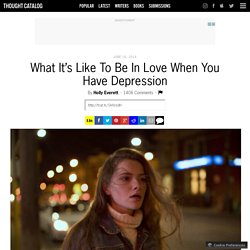 How to Deal With Anxiety and Panic Attacks. 9 beautiful releasing rituals that will help you let go. Goodbye, she whispered softly and gently placed her hand on my shoulder. 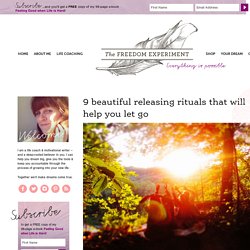 Tears were streaming down both of our faces. And over the past few days – her last days in this office – she had run out of tissue paper. 4 Ways to Be an Ally to People with Invisible Disabilities. Dissociation and dissociative disorders. Dissociation is a mental process where a person disconnects from their thoughts, feelings, memories or sense of identity. Dissociative disorders include dissociative amnesia, dissociative fugue, depersonalisation disorder and dissociative identity disorder. People who experience a traumatic event will often have some degree of dissociation during the event itself or in the following hours, days or weeks. For example, the event seems ‘unreal’ or the person feels detached from what’s going on around them as if watching the events on television. In most cases, the dissociation resolves without the need for treatment.

Some people, however, develop a dissociative disorder that requires treatment. Symptoms A range of dissociative disorders Mental health professionals recognise four main types of dissociative disorder, including: Dissociative amnesia Dissociative fugue Depersonalisation disorder Dissociative identity disorder. Why Narcissism Is a Profoundly Misunderstood Psychological Disorder. Interesting read, though if you're really looking for an understanding of narcissistic personalities I would highly recommend you spend some time reading through Heinz Kohut's in-depth work on narcissism. I would also argue against your statement that, "On their own, psychoanalytic explanations are inadequate and unconvincing.

" While I wholeheartedly agree with you that current discoveries in neuroscience and neuropsychology can support psychoanalytic conceptualizations, the ideas themselves have been widely validated and accepted within the psychoanalytic community. (2) Do You Love Someone With Depression? - Just_Eric - FetLife. Why Lying Broken in a Pile on Your Bedroom Floor is a Good Idea. ~ Julie (JC) Peters. It's Not You: 4 Signs Your Partner's Too Depressed to Have Sex. A couple of weeks ago, someone tweeted at me to ask for advice on getting their partner "to be more into sex. " It turned out that said partner was dealing with depression and had lost all sexual interest. I tried to explain to this man that he really couldn’t do much to make his partner want sex at the moment, that it sounded like the depression was causing the loss of libido.