Forbes Welcome. The Efficacy of Cognitive Behavioral Therapy: A Review of Meta-analyses. Depression. Mindfulness. Beyond the resources provided on this website, we also host a dedicated mindfulness site at Be Mindful, which provides access to our online course and a free taster session. 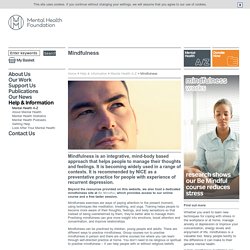 Mindfulness exercises are ways of paying attention to the present moment, using techniques like meditation, breathing, and yoga. Training helps people to become more aware of their thoughts, feelings, and body sensations so that instead of being overwhelmed by them, they’re better able to manage them. Practising mindfulness can give more insight into emotions, boost attention and concentration, and improve relationships. 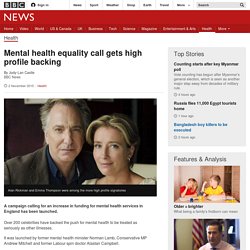 Over 200 celebrities have backed the push for mental health to be treated as seriously as other illnesses. It was launched by former mental health minister Norman Lamb, Conservative MP Andrew Mitchell and former Labour spin doctor Alastair Campbell. Health Secretary Jeremy Hunt said treatment had made "great strides" but more could be done to improve services.

The government increased overall mental health funding to £11.7bn in 2014/15. But Mr Lamb said people with mental ill health "don't get the same right to access treatment on a timely basis that everyone else gets". His son was diagnosed with obsessive compulsive disorder at the age of 15 and Mr Campbell has spoken about his battle with depression. Inequality in care. Why is death rate rising for white, middle-aged Americans? Image copyright Getty Images Middle-aged white Americans are seeing rising death rates that have shocked researchers. 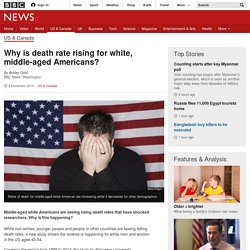 Why is this happening? While non-whites, younger people and people in other countries are seeing falling death rates, a new study shows the reverse is happening for white men and women in the US aged 45-54. Covering the period from 1999 to 2013, the study by Princeton University researchers says it is particularly acute for those without a college education.

"This change reversed decades of progress in mortality and was unique to the United States; no other rich country saw a similar turnaround," the authors wrote of their study, published in the Proceedings of the National Academy of Sciences. Why We Can’t Ignore the Rise of Mental Health Problems Among Students. Illustration by Joel Benjamin When I arrived at the College of William & Mary in Williamsburg, Virginia last August, it felt like a paradise. 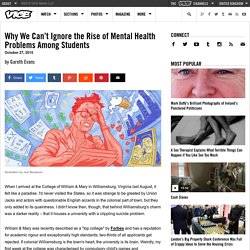 I'd never visited the States, so it was strange to be greeted by Union Jacks and actors with questionable English accents in the colonial part of town, but they only added to its quaintness. I didn't know then, though, that behind Williamsburg's charm was a darker reality – that it houses a university with a crippling suicide problem. William & Mary was recently described as a "top college" by Forbes and has a reputation for academic rigour and exceptionally high standards; two-thirds of all applicants get rejected.

If colonial Williamsburg is the town's heart, the university is its brain. India's Mental Health Crisis. Angel Haze Talks About The Epidemic of Youth Depression. Angel Haze has got a new column with Noisey. 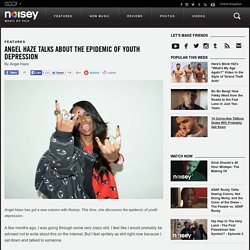 This time, she discusses the epidemic of youth depression. A few months ago, I was going through some very crazy shit. I feel like I would probably be advised not to write about this on the internet. 13 shocking pictures showing how we used to 'treat' the mentally ill. Posted by Aaron Jackson People with psychiatric problems were not always considered fully human: even within the last 100 years problems ranging from epilepsy and schizophrenia to things like dementia, post-traumatic stress, and even childhood misbehavior were treated with shocking cruelty. 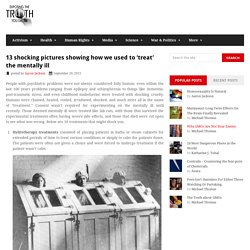 Humans were chained, heated, cooled, irradiated, shocked, and much more all in the name of “treatment.” Consent wasn’t required for experimenting on the mentally ill until recently. Those deemed mentally ill were treated like lab rats, with those that survived the experimental treatments often having severe side effects, and those that died were cut open to see what was wrong. Below are 10 treatments that might shock you. Hydrotherapy treatments consisted of placing patients in baths or steam cabinets for extended periods of time to treat various conditions or simply to calm the patients down. On World Mental Health Day  I get confused when I hear 'mental health day'. 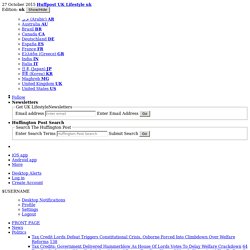 It implies that everything is hunky dory on the mental front, that every other day we don't have mental illness (and some of us don't.). It's like saying 10 December is physical health day. Saturday 10 October, is World Mental Health Day. Using What Works – An East/West Approach to Mental Health. By Big Think Editors Until the late 20th century, Western approaches to mental well-being focused mainly on treatments directly affecting brain function (via surgery, electric shock or pharmaceuticals, for example) or insight-oriented psychotherapy intended to unearth the root causes of mental distress and (hopefully) thereby end them. 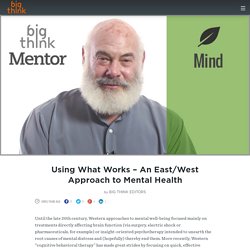 More recently, Western “cognitive behavioral therapy” has made great strides by focusing on quick, effective treatment of problematic behaviors, rather than trying to ferret out root causes. For several thousand years, Eastern approaches have focused on proactive, self-directed self-care through meditation, breathing exercises, and the physical activities we in the West think of as “yoga” (though the term "yoga" technically covers a wide range of practices, including meditation). Dr. Video: Dr. . - Take a holistic and realistic approach to unlocking “spontaneous happiness.” - Integrate Eastern and Western approaches to positive psychology. Blogs about mental health. Mental Health Statistics. Is the pharmaceutical industry distorting psychiatry practice. Published June 2003 This was prepared as a MAUDSLEY DISCUSSION PAPER and is available for £4 as a booklet from the Sarah Smith at the Institute of Psychiatry, de Crespigny Park, London SE5 8AF, tel 0207836 5454, e mail sarah.smith@iop.kcl.ac.uk Western society is consuming ever larger quantities of prescription drugs and many of these are for psychiatric complaints. 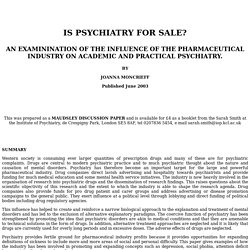 Drugs are central to modern psychiatric practice and to much psychiatric thought about the nature and causation of mental disorders. Psychiatry has therefore become an important target for the large and powerful pharmaceutical industry.