The Wrong People Are Asking The Wrong Questions About Fidget Spinners. Why is nobody talking to people who have the disabilities these were originally designed to solve? 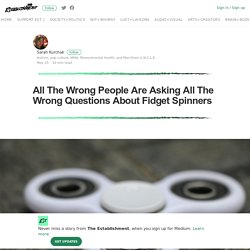 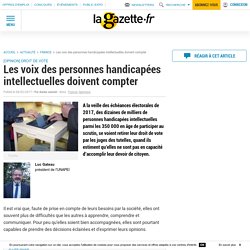 Blog de réflexions autour du vécu traumatique et de la réappropriation des corps, de l'identité de genre, des sexualités et de l’expression pornographique. Troubles anxieux. What Anxiety Does to Your Brain and What You Can Do About It. A mentally ill woman’s harrowing final days: ‘God Knows Where I Am’ This documentary explores mental illness through the story of a homeless woman, Linda Bishop, whose body was found in an abandoned New Hampshire farmhouse. 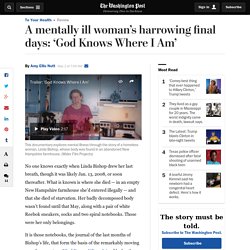 It is those notebooks, the journal of the last months of Bishop’s life, that form the basis of the remarkably moving new documentary, “God Knows Where I Am,” by brothers Jedd and Todd Wider. [Can magnets reset a depressed person's brain?] Dear God, please save me. 7 Illustrations That Capture Exactly What It’s Like to Have Anxiety - Everyday Feminism.

How Your ‘Tough Love’ Hurts People with Depression – And What to Do Instead - Everyday Feminism. Why Mental and Physical Illnesses Make People So Tired. Chances are, if you know someone with a mental disorder or disability, you might have asked them or thought, “Why are you tired?” 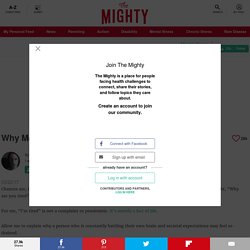 For me, “I’m tired” is not a complaint or pessimistic. It’s merely a fact of life. Allow me to explain why a person who is constantly battling their own brain and societal expectations may feel so drained. These are people whose brains are stuck in overdrive and have a great amount of difficulty unwinding to fall asleep at night. For the “average” person, it takes seven minutes to fall asleep.

Imagine crawling into bed exhausted and it takes the average of an hour to fall asleep, instead of seven minutes. These are people whose sleep is frequently disturbed and who spend their nights tossing and turning instead of resting. The Strongest Girls Are The Girls With Anxiety. She’s strong, because she’s in a constant battle with her anxiety. 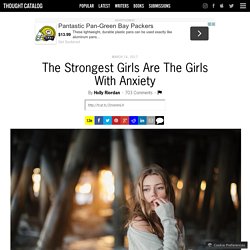 It’s telling her that she’s weak. That she shouldn’t speak up. That she shouldn’t get out of bed. Some days, she listens to everything that voice tells her. But other days, she finds the power to ignore it. She’s strong, because she shows up, even when she’s shaking. It would be easy for her to cancel plans with her friends, turn down dates, skip class, call in sick from work — and sometimes, she does.

But most of the time, she does what she has to do. Of course, she gets distracted throughout the day. I Have a Mental Disorder – And No, I'm Not Sorry. Mental Health By the Numbers. Millions of Americans are affected by mental health conditions every year. 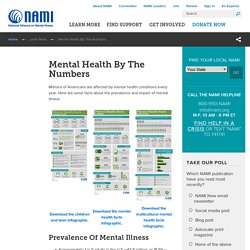 Here are some facts about the prevalence and impact of mental illness. Schizophrenia. (n.d.). Retrieved January 16, 2015, from Bipolar Disorder Among Adults. (n.d.). 10 facts on mental health. Mental Health By the Numbers. ANNUAIRE DES CENTRES MEDICAUX PSYCHOLOGIQUES (SUIVI GRATUIT) 4 Ways Mentally Ill People Are Blamed For Their Struggles - Unapologetic Feminism. The first time I told someone that I was mentally ill, they reacted with disbelief. 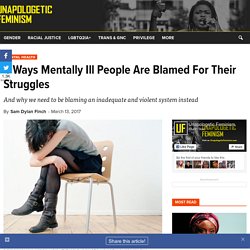 “You?” They asked. When You Feel Like You’re ‘Too Much’ for Your Friends. It is so common to have bad experiences with therapists, and I’ve had my fair share. 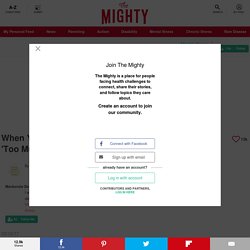 But we hardly ever hear about the therapists and mental health professionals who do a good job, who make a difference. So this post is dedicated to those of you who have made my life, and the lives of countless others, better. When I was in high school I was severely mentally ill and eventually ended up in specialized outpatient care. I was scared and confused and felt intimidated by all the people asking me questions. Institut universitaire en santé mentale de Montréal. Politiques et données sur l'emploi. Comic Strip Shows Why Anxiety & Depression Are So Difficult To Fight. Depression and anxiety disorders are different, but people with depression often experience symptoms similar to those of an anxiety disorder, such as nervousness, irritability, and problems sleeping and concentrating. 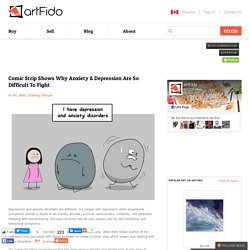 But each disorder has its own causes and its own emotional and behavioral symptoms. To try and explain the disorders in their own very personal way, artist Nick Seluk (author of the Awkward Yeti) partnered with Sarah Flanigan to create a comic strip which shows how dealing with these disorders is a daily struggle. “As someone who’s experienced and has been around anxiety and depression, it was easy to illustrate in a way that complemented the storyteller,” Seluk said. “Sometimes those who haven’t experienced the extremes don’t understand what it’s like, almost to the point of resenting it.”

(via Bored Panda) 7 Illustrations That Capture Exactly What It’s Like to Have Anxiety - Everyday Feminism. 5 Barriers Making It Harder to Get Mental Health Care If You're Not White - Everyday Feminism. 83 Percent Of Us Will Suffer From A Mental Disorder, According To Study. Mental illnesses are poorly understood by the general public. 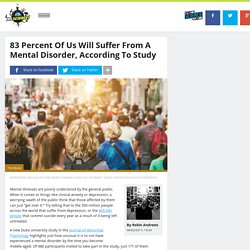 When it comes to things like clinical anxiety or depression, a worrying swath of the public think that those afflicted by them can just “get over it.” Try telling that to the 350 million people across the world that suffer from depression, or the 800,000 people that commit suicide every year as a result of it being left untreated. A new Duke University study in the Journal of Abnormal Psychology highlights just how unusual it is to not have experienced a mental disorder by the time you become middle-aged. Of 988 participants invited to take part in the study, just 171 of them experienced no anxiety, depression, or related issues between the ages of 11 and 38. This means that by the time you are 38, assuming all else is equal, you could be one of the 83 percent of people that suffer from a mental affliction.

This study doesn’t seem to show that. 5 Things You Shouldn't Say to Somebody Dealing with Anxiety - Everyday Feminism. Helpful Advice. Tips for Managing Anxiety When There’s a Lot of Bad News. Turning on the television, devastating news is common. Listening to the radio, voices echo the same sentiment. Hoping for a reprieve or positive news for your day, you login to your social media of choice. Post upon post upon post, you see horrors. The dark side of today’s connected life is we are unable to avoid the onslaught of images and posts in our newsfeed. Whether it is violence, a health crisis or terrorism, we live in an uncertain time. Ask Questions: When you encounter an issue that deeply affects you and in turn your anxiety, ask questions. Action: Sometimes I react due to the simple horrific nature of the news. Take a Break: Turn off your phone. Minimize: If it is feasible, minimize or eliminate the source of the anxiety.

Go to Bed: I used to think I was a super human superhero with dark circles under my eyes as my own personal cape to prove I could do it all. There are still days when my fear wins and I cannot leave my home. We want to hear your story. Anxiety: What No One Talks About. Tips for Managing Anxiety When There’s a Lot of Bad News. What to Tell Someone With Mental Illness When Feeling Low. Laura Darrall launched the #ItAffectsMe social media campaign on Tuesday, a movement to help end the stigma associated with mental illness. The idea behind the campaign is pretty simple.

Write “#ItAffectsMe” on a Post-It note, stick it on your forehead and take a selfie. “#itaffectsme is simply the statement that we have all known or will know mental illness in our lives, whether through ourselves, families, friends or a stranger in the street,” Darrall writes on her website. The 28-year-old wrote on her personal blog that she “has suffered on and off from anxiety, depression, panic attacks and more OCD (obsessive-compulsive disorder) than you could sink a battle ship with.”

In a YouTube video on the #ItAffectsMe website, Darrall explains that after getting help, she wanted to figure out a way to give back to Mind, the organization that helped her. What People Don’t Realize You’re Doing Because of Your Social Anxiety. 77Save When people think of social anxiety, many imagine a shy introvert who doesn’t go out and doesn’t say much. While this version of social anxiety exists, living with it is more than just being “shy.” In fact, not everyone who has social anxiety is even quiet.

Social anxiety manifests itself in many ways, some which might even surprise you. To find out some of the different ways people are affected by social anxiety, we asked people in our community to share something they do because of their social anxiety that others might not realize. There’s an awful cost to getting a PhD that no one talks about — Quartz. Sydney, Australia Pauline Hanson, a senator Down Under, wants to make Australia great again. Like Donald Trump in the US, she doesn’t mind sounding politically incorrect while stoking fears about immigration. “We are in danger of being swamped by Muslims who bear a culture and ideology that is incompatible with our own,” she warned last September in her “maiden speech” to fellow lawmakers, which came a few months after winning enough votes to represent the state of Queensland.

Unhelpful Advice: Using Logic to Combat a Mental Illness. Anxiety doesn't come with a guide. Here's what I need from you if you want to help.