It's time for teachers to look after their mental health – here's how. During the safety briefing on every plane journey adults are reminded that, in case of an emergency, they are to secure their own oxygen masks before they help their children fit theirs. 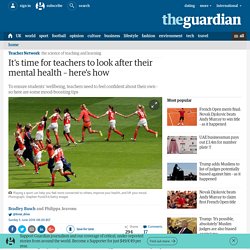 Why? Because it helps you look after children more effectively. The same is true of mental health, and it is something teachers should consider. After all, it is difficult to discuss good mental wellbeing in front of class if we, as adults, do not practise it ourselves. Action to improve the mental health of teachers is certainly needed: worries about teacher workload has seen 67% of teachers state that their job had adversely impacted their mental or physical health, according to a recent NASUWT survey. Which is why it’s worthwhile for teachers to look at these simple ways, informed by the latest NHS guidelines, to boost their mental health.

Connect Researchers have shown the importance of having a range of healthy relationships. Be aware We live in an age of distraction. Keep learning Be active. Mara Wilson's Important Message For Teens Living With Mental Illness. Looking back on her experience with mental health issues, Mara Wilson wishes someone had told her that being depressed and having anxiety was OK. 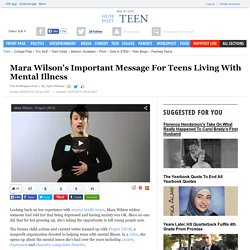 Since no one did that for her growing up, she’s taking the opportunity to tell young people now. The former child actress and current writer teamed up with Project UROK, a nonprofit organization devoted to helping teens with mental illness. In a video, she opens up about the mental issues she’s had over the years including anxiety, depression and obsessive-compulsive disorder. “I was an anxious kid, and I’m still kind of an anxious adult,” she said. Mental Health Awareness Week: Artist Unveils Candid Paintings Depicting Struggle With Anxiety. ASPIREist Episode #3: The Suicide Epidemic. Shona Sanzgiri / April 17, 2016 Scenes from a youth community suicide help center on the Pine Ridge Indian Reservation. 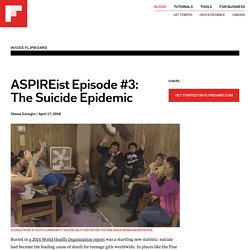 Buried in a 2014 World Health Organization report was a startling new statistic: suicide had become the leading cause of death for teenage girls worldwide. In places like the Pine Ridge Indian Reservation, where poverty, unemployment and substance abuse run rampant, the high incidences of youth suicide—10 times the national rate—speak to a bleak future for “America’s most forgotten children.”

As the CEO of Malala Yousafzai’s Malala Fund, philanthropist and social entrepreneur Shiza Shahid has personal experience working with young women in dire situations. This Sunday, April 17 at 8 AM ET, Shahid visits with members of the Pine Ridge Reservation to understand the situation in a place where the average lifespan is the second lowest in the Western Hemisphere—and what we all can do to change that.

Additional segments from the episode include: The Physical Symptoms Of Depression And Anxiety Are Real  Paul, a lawyer, says he's had an upset stomach and diarrhea "forever". 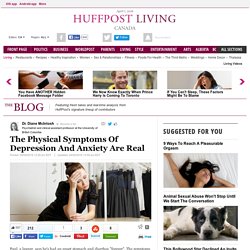 The symptoms are especially unpleasant when he's presenting to colleagues at work, but they can also happen suddenly, with no provocation or warning. Ultimate Guide: Self-Help Tips To Deal With Depression. It’s been estimated that nearly 350 million people in the world suffer from depression and almost 80% don’t receive any treatment – that’s a lot of people dealing with depression on their own. 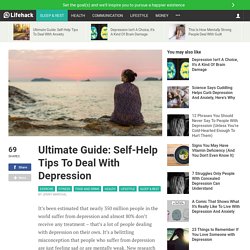 It’s a belittling misconception that people who suffer from depression are just feeling sad or are mentally weak. New research has found that depression is actually a kind of brain damage which backs up the fact that it’s not something people can just cure or ‘get over’. These Are the Best Exercises for Anxiety and Depression. Photo: Getty Images If you suffer from depression or anxiety, your workout can play a key role in managing your symptoms, thanks to the powerful link between your physical and mental health. 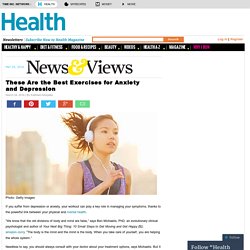 “We know that the old divisions of body and mind are false,” says Ben Michaelis, PhD, an evolutionary clinical psychologist and author of Your Next Big Thing: 10 Small Steps to Get Moving and Get Happy ($2; amazon.com). “The body is the mind and the mind is the body. When you take care of yourself, you are helping the whole system.” How a Dog Helped Me Manage My Anxiety and Depression.

I first began experiencing anxiety and depression at the age of 14 after being bullied at school for years. 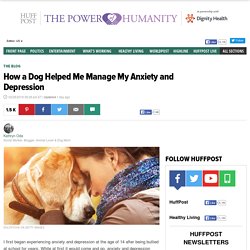 While at first it would come and go, anxiety and depression eventually became a constant presence in my life. It was like a perpetual cough that eventually starts to get better, only to come back worse than before. Only unlike a cough, where usually I am still able to function, anxiety and depression hits like a ton of bricks and even the idea of getting out of bed seems to be a goal that gets to be less and less attainable. As time passed, more and more of my days started to be spent paralyzed by endless thoughts of regrets of the past and worries for the future. This Super Hot Crossfitter Wants To Change The Way You Think About Masculinity. Schools are not training us to tackle mental health problems, teachers say. Only a third of teachers say that they have been appropriately trained by their school to deal with pupils' mental health problems, according to goverment-funded research. 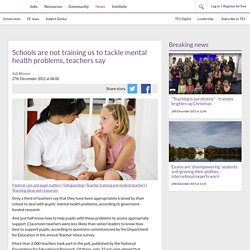 And just half know how to help pupils with these problems to access appropriate support. Classroom teachers were less likely than senior leaders to know how best to support pupils, according to questions commissioned by the Department for Education in the annual Teacher Voice survey. More than 2,000 teachers took part in the poll, published by the National Foundation for Educational Research. Teach mental health in primary schools, advisory group says. Mental health should be placed on the national curriculum for primary school children, an NHS-affiliated advisory group has said. 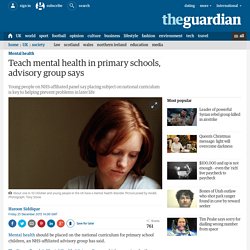 The Young People’s Mental Health Advisory Group, which was set up by the NHS’s clinical research network, said that if problems were to be prevented or dealt with effectively later, it was essential to address the issue early. Susannah Page, a member of the group, said: “The first step [in dealing with mental health] is by tackling the stigma, and the way to do that is, while people are still young and learning, to talk to them about what mental health is and how you can get good mental health. It should definitely be part of the national curriculum, in common with sex education. Why You Should Keep a Journal (and How to Start Yours) Living With A Mental Disorder.