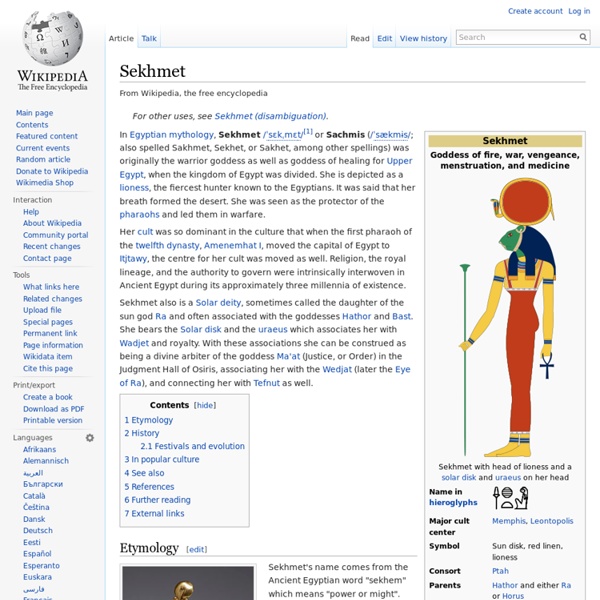 In Egyptian mythology, Sekhmet /ˈsɛkˌmɛt/[1] or Sachmis (/ˈsækmɨs/; also spelled Sakhmet, Sekhet, or Sakhet, among other spellings) was originally the warrior goddess as well as goddess of healing for Upper Egypt, when the kingdom of Egypt was divided. She is depicted as a lioness, the fiercest hunter known to the Egyptians. It was said that her breath formed the desert. She was seen as the protector of the pharaohs and led them in warfare. Sekhmet also is a Solar deity, sometimes called the daughter of the sun god Ra and often associated with the goddesses Hathor and Bast. Etymology[edit] Sekhmet's name comes from the Ancient Egyptian word "sekhem" which means "power or might". History[edit] Bust of the Goddess Sakhmet, ca. 1390-1352 B.C.E. The warrior goddess Sekhmet, shown with her sun disk and cobra crown from a relief at the Temple of Kom Ombo. In order to placate Sekhmet's wrath, her priestesses performed a ritual before a different statue of the goddess on each day of the year.

Ra Ra /rɑː/[1] or Re /reɪ/ (Egyptian: 𓂋ꜥ, rˤ) is the ancient Egyptian solar deity. By the Fifth Dynasty (2494 to 2345 BC) he had become a major god in ancient Egyptian religion, identified primarily with the midday sun. The meaning of the name is uncertain, but it is thought that if not a word for 'sun' it may be a variant of or linked to words meaning 'creative power' and 'creator'.[2] In later Egyptian dynastic times, Ra was merged with the god Horus, as Re-Horakhty ("Ra, who is Horus of the Two Horizons"). All forms of life were believed to have been created by Ra, who called each of them into existence by speaking their secret names. Role[edit] Ra and the sun[edit] To the Egyptians, the sun represented light, warmth, and growth. Ra in the underworld[edit] When Ra was in the underworld, he merged with Osiris, the god of the dead, and through it became the god of the dead as well.[4] Ra as creator[edit] Iconography[edit] Ra was represented in a variety of forms. Worship[edit] Amun and Amun-Ra

Thoth Thoth played many vital and prominent roles in Egyptian mythology, such as maintaining the universe, and being one of the two deities (the other being Ma'at) who stood on either side of Ra's boat.[5] In the later history of ancient Egypt, Thoth became heavily associated with the arbitration of godly disputes,[6] the arts of magic, the system of writing, the development of science,[7] and the judgment of the dead.[8] Name[edit] Etymology[edit] The Egyptian pronunciation of ḏḥwty is not fully known, but may be reconstructed as *ḏiḥautī, based on the Ancient Greek borrowing Θώθ [tʰɔːtʰ] Thōth or Theut and the fact that it evolved into Sahidic Coptic variously as Thoout, Thōth, Thoot, Thaut as well as Bohairic Coptic Thōout. According to Theodor Hopfner,[12] Thoth's Egyptian name written as ḏḥwty originated from ḏḥw, claimed to be the oldest known name for the Ibis although normally written as hbj. Further names and spellings[edit] Depictions[edit] Attributes[edit] Mythology[edit] History[edit]

Khepri Khepri (also spelled Khepera, Kheper, Khepra, Chepri) is a god in ancient Egyptian religion. Symbolism[edit] Khepri was connected with the scarab beetle (kheprer), because the scarab rolls balls of dung across the ground, an act that the Egyptians saw as a symbol of the forces that move the sun across the sky. Khepri was thus a solar deity. Religion[edit] Appearance[edit] References[edit] ^ Jump up to: a b Wilkinson, Richard H. (2003). External links[edit] Media related to Khepri at Wikimedia Commons

Ammit Ammit (/ˈæmɨt/; "devourer" or "soul-eater"; also spelled Ammut or Ahemait) was a female demon in ancient Egyptian religion with a body that was part lion, hippopotamus and crocodile—the three largest "man-eating" animals known to ancient Egyptians. A funerary deity, her titles included "Devourer of the Dead", "Eater of Hearts", and "Great of Death". Ammit lived near the scales of justice in Duat, the Egyptian underworld. In the Hall of Two Truths, Anubis weighed the heart of a person against the feather of Ma'at, the goddess of truth, which was depicted as an ostrich feather (the feather was often pictured in Ma'at's headdress). Ammit was not worshipped; instead she embodied all that the Egyptians feared, threatening to bind them to eternal restlessness if they did not follow the principle of Ma'at. See also[edit] References[edit] Media related to Ammit at Wikimedia Commons

Apollo Apollo (Attic, Ionic, and Homeric Greek: Ἀπόλλων, Apollōn (GEN Ἀπόλλωνος); Doric: Ἀπέλλων, Apellōn; Arcadocypriot: Ἀπείλων, Apeilōn; Aeolic: Ἄπλουν, Aploun; Latin: Apollō) is one of the most important and complex of the Olympian deities in classical Greek and Roman religion and Greek and Roman mythology. The ideal of the kouros (a beardless, athletic youth), Apollo has been variously recognized as a god of light and the sun, truth and prophecy, healing, plague, music, poetry, and more. Apollo is the son of Zeus and Leto, and has a twin sister, the chaste huntress Artemis. Apollo is known in Greek-influenced Etruscan mythology as Apulu. Etymology Tetradrachm from the Illyro-Paeonian region, representing Apollo The etymology of Apollo is uncertain. Several instances of popular etymology are attested from ancient authors. A Luwian etymology suggested for Apaliunas makes Apollo "The One of Entrapment", perhaps in the sense of "Hunter".[11] Greco-Roman epithets

Apep Development[edit] Ra was the solar deity, bringer of light, and thus the upholder of Ma'at. Apep was viewed as the greatest enemy of Ra, and thus was given the title Enemy of Ra. Also, comparable hostile snakes as enemies of the sun god existed under other names (in the Pyramid Texts and Coffin Texts) already before the name Apep occurred. Battles with Ra[edit] Set speared Apep The sun god Ra, in the form of Great Cat, slays the snake Apep[5] Tales of Apep's battles against Ra were elaborated during the New Kingdom.[6] Since everyone can see that the sun is not attacked by a giant snake during the day, every day, storytellers said that Apep must lie just below the horizon. In a bid to explain certain natural phenomena it was said that occasionally Apep got the upper hand. However, in other myths, it was the cat goddess Bastet, daughter of Ra, who slew Apep in her cat form one night, hunting him down with her all seeing eye. Worship[edit] Ra was worshipped, and Apep worshipped against.

Baldr "Each arrow overshot his head" (1902) by Elmer Boyd Smith. Baldr (also Balder, Baldur) is a god of light and purity in Norse mythology, and a son of the god Odin and the goddess Frigg. He has numerous brothers, such as Thor and Váli. In the 12th century, Danish accounts by Saxo Grammaticus and other Danish Latin chroniclers recorded a euhemerized account of his story. Compiled in Iceland in the 13th century, but based on much older Old Norse poetry, the Poetic Edda and the Prose Edda contain numerous references to the death of Baldr as both a great tragedy to the Æsir and a harbinger of Ragnarök. Name[edit] Jacob Grimm in his Teutonic Mythology (ch. 11) identifies Old Norse Baldr with the Old High German Baldere (2nd Merseburg Charm, Thuringia), Palter (theonym, Bavaria), Paltar (personal name) and with Old English bealdor, baldor "lord, prince, king" (used always with a genitive plural, as in gumena baldor "lord of men", wigena baldor "lord of warriors", et cetera). Attestations[edit]

Ancient Egypt: the Mythology and egyptian myths Bastet Photograph of an alabaster cosmetic jar topped with a lioness, representing Bast, an 18th dynasty burial artifact from the tomb of Tutankhamun circa 1323 BC - Cairo Museum Bastet was a goddess in ancient Egyptian religion, worshipped as early as the Second Dynasty (2890 BC). As Bast, she was the goddess of warfare in Lower Egypt, the Nile River delta region, before the unification of the cultures of ancient Egypt. The two uniting cultures had deities that shared similar roles and usually the same imagery. Name[edit] Bastet, the form of the name which is most commonly adopted by Egyptologists today because of its use in later dynasties, is a modern convention offering one possible reconstruction. During later dynasties, Bast was assigned a lesser role in the pantheon bearing the name Bastet, but retained. The town of Bast's cult (see below) was known in Greek as Boubastis (Βούβαστις). She was the goddess of protection against contagious diseases and evil spirits.[4] Bubastis[edit]