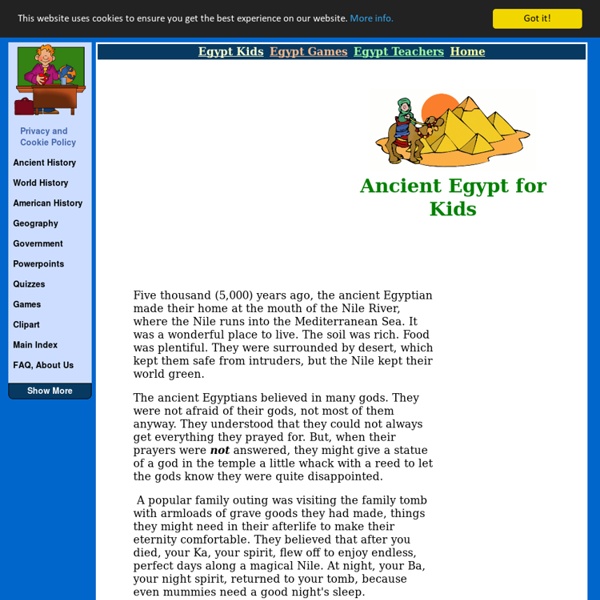 Ancient Egypt for Kids The story of ancient Egypt has survived for thousands of years. Egypt was one of the greatest civilizations of the past. The monuments and tombs of their Pharaohs continue to stand intact today, some 4,000 years later! A good portion of the Old testament takes place in or around Egypt. Egypt also plays a major role in the life of many Bible people from Moses and Joseph to Jesus. Egypt is situated in the northeast corner of the Africa. A large river called the River Nile flows through the country into the Mediterranean Sea. The Ancient Egyptians lived along the banks of the river Nile in Egypt. About 95 % of Egypt's population still live in the Nile valley (the area next to the river). Egypt is mainly made up of hot deserts and receives little rainfall. All of Egypt depended on the Nile for water, food and transportation. Before modern dams were built the river Nile would flood each year coating the land on either side of the river with thick back mud.

Solved! How Ancient Egyptians Moved Massive Pyramid Stones Researchers have traced how cells in our retina track objects that move across our field of vision, thanks in part to thousands of video gamers. The findings, published online Sunday by the journal Nature, validate a concept that explains how some nerve cells are stimulated only by motion in a specific direction and not in other directions. They also validate the use of video games, crowdsourcing and the other tools of citizen science for making rigorous scientific discoveries. "You no longer have to have a Ph.D. in neuroscience," said Amy Robinson, creative director for the EyeWire neuro-gaming venture, which contributed to the study. More than 120,000 EyeWire gamers ("EyeWirers") from more than 100 countries have signed up to play online video games in which they trace 3-D representations of neural wiring. The project to trace retinal neurons known as starburst amacrine cells was particularly challenging. Alex Norton / EyeWire / MIT Mapping the retina How our motion detector works EyeWire

Europe Facts | Kids World Travel Guide | Geography | Attractions | Fun Facts Our Europe Facts for Kids bring you lots of interesting and fun facts on the European continent. Europe is the second smallest continent in size and the third largest when we consider population. The European continent houses 50 countries and five countries that are not recognised by the European community. The continent is located mainly in the eastern hemisphere and completely in the northern hemisphere. Top 20 Europe Facts 1. 2. 3. 4. 5. 6. 7. 8. 9. 10. More Europe Facts 11. 12. 13. 14. 15. Big Ben and Houses of Parliament Colosseo in Rome 11. Istanbul However, remember that Istanbul is a city which is located actually on two continents: the western part belongs to Europe while the eastern parts belongs to the Asian continent! Europe Facts: Other big cities in Europe are: Moscow (Russia) - 12.3 millionLondon (England) - 8.6 millionSt Petersburg (Russia) - 5.2 millionBerlin (Germany) - 3.6 millionMadrid (Spain) - 3.2 million Winter Palace in St Petersburg Did you know? 12. 18. 19. 20.

Egyptian writing - hieroglyphics - Homework for kids Interesting Fact: The Egyptians did not write vowels and did not use any punctuation. The Egyptian writing called hieroglyphics used pictures to represent different objects, actions, sound or ideas. There were more than 700 hieroglyphs. Some pictures stood for whole words. Write like an Egyptian, see you name in hieroglyphs Hieroglyphs is made from two Greek words: hieros meaning holy glyphe meaning writing So hieroglyph means holy writing. This writing was uncovered by the Rosetta Stone. You need to look closely at the hieroglyphs to find out. Hieroglyphs were written on papyrus reed, which is a water or marsh plant, with tall straight hollow stems.The reeds were flattened, dried, and stuck together to make pages. The Egyptians also carved hieroglyphs onto stone and painted them on the walls of the tombs. Egyptian writing was done with pen and ink on fine paper (papyrus). Egyptian "pens" were thin, sharp reeds, which they would dip in ink to write with. Hieroglyphs - discover more

Countries Hurling is the ancient Irish national game. The 'shamrock': a three-leaf clover and one of the symbols of Ireland. The west coast of Ireland is mountainous and is often wet and windy which makes for a dramatic and wild coastline on the Atlantic Ocean. Ireland has a population of around 4.76 million, with a quarter of them living in Dublin. Other Irish cities include Galway, Cork, Waterford and Limerick. Ireland has two official languages: English is spoken by nearly everyone, while around 40% can also speak Irish (Gaeilge). Between 1845 and 1850, Ireland suffered from 'The Great Famine' when the potato harvests failed. Have you heard of Ireland’s ‘bog bodies’? Ireland has a rich cultural heritage and is famous for its music and storytelling. St Patrick is the patron saint of Ireland, and is celebrated across the world on 17 March – but St Patrick wasn't actually Irish! In the Bronze Age Ireland hosted its own version of the Olympic Games, over 1 000 years before the Greeks.

Ancient Egypt for Kids and Teachers - Ancient Egypt for Kids Senebkay: Archaeologists Find ‘Lost’ Pharaoh of Ancient Egypt U.S. archaeologists digging at Abydos, Egypt say they have discovered the tomb of Woseribre-Senebkay, a previously unknown Egyptian pharaoh who ruled during the Second Intermediate Period, shortly before 1650 BC. The cartouche of a newly discovered pharaoh, Woseribre Senebkay, inside the king’s burial tomb. Image credit: Jennifer Wegner, Penn Museum. The excavations at Abydos during the 2013 season have yielded numerous finds including a royal tomb with a large sarcophagus weighing almost 60 tons. The tomb was uncovered close to the recently discovered tomb of Sobekhotep (1780 BC), the first king of 13th Dynasty. According to the archaeologists from the University of Pennsylvania, the sarcophagus, of red quartzite quarried and transported to Abydos from Gebel Ahmar, near Cairo, dates to ca. 1650 BC. Painted decoration in the burial chamber of the pharaoh Woseribre Senebkay. Close up of Penn Museum excavations of a recently discovered royal chamber at Abydos, Egypt, June 2013.

What are fossils? - Kids Dinos Fossils are the preserved remains of plants or animals. For such remains to be considered fossils, scientists have decided they have to be over 10,000 years old. There are two main types of fossils, body fossils and trace fossils. Body fossils are the preserved remains of a plant or animal’s body. Trace fossils are the remains of the activity of an animal, such as preserved trackways, footprints, fossilized egg shells, and nests. When asked what a fossil is, most people think of petrified bones or petrified wood. When an animal or plant dies, it may fall into mud or soft sand and make an impression or mark in the dirt. A simple experiment can show you how this works. Another type of fossil is a resin fossil.