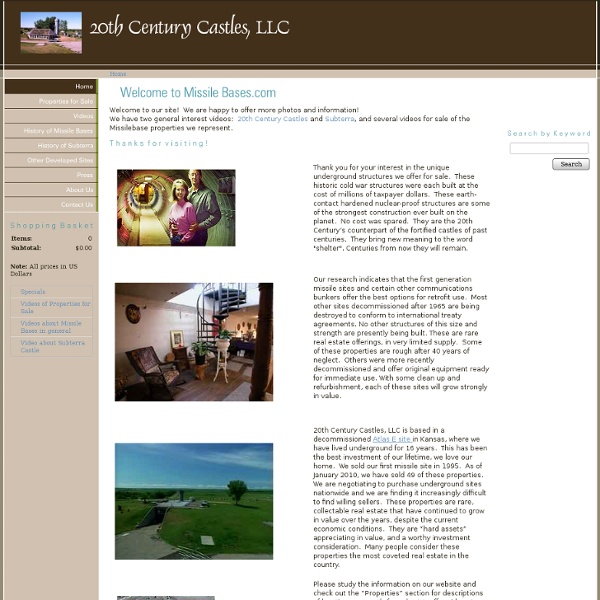 Peter Callesen Underground living Underground living refers simply to living below the ground's surface, whether in naturally occurring caves or in built structures. Underground dwellings are an alternative to traditionally built above-ground dwellings for some home seekers, especially those who are looking to minimize their negative impact on the environment. Some of the advantages of underground houses include resistance to severe weather, quiet living space, an unobtrusive presence in the surrounding landscape, and a nearly constant interior temperature due to the natural insulating properties of the surrounding earth. Underground living has been a feature of fiction, such as the hobbit holes of the Shire as described in the stories of J. Often, underground living structures are not entirely underground, typically they can be exposed on one side when built into a hill. History[edit] There is only written documentation of Scythian and German subterranean dwellings. Construction methods[edit] Structures[edit] Notes[edit]

25 New Free High-Quality Fonts - Smashing Magazine - StumbleUpon Advertisement Every now and then we look around, select fresh free high-quality fonts and present them to you in a brief overview. The choice is enormous, so the time you need to find them is usually time you should be investing in your projects. We search for them and find them so that you don’t have to. In this selection, we’re pleased to present Pompadour Numeral Set, Lato, Crimson Text, Espinosa Nova, Musa Ornata, Spatha Sans, ColorLines, Roke1984, Neuton, Avro, Baurete and other fonts. New High-Quality Free Fonts Pompadour Numeral Set1 (.eps, released under Creative Commons) A beautiful numeral font released by Andy Mangold under a Creative Commons license. Lato2 (open-source sans serif) Lato is a san-serif typeface family. Crimson Text3 “Crimson Text is a font family for book production in the tradition of beautiful old-style typefaces. Color Lines5 This decorative font can be used for a variety of products, such as posters, packaging and label design. Further Resources Last Click

Underground Living – Hidden Homes The famous underground houses, unbelievable?!?! Wild? A bit strange? If we stop to think for a second, people have been living under the ground since the beginning of time. All history books speak about cavemen. But in time, the situation changed. Cave-house in shape of a human face, Bomarzo, Italy, 16th c, Picture source: Learning from Architecture After thousands and thousands of years things have changed a little… Today’s earth shelter dwellings are a more friendly and elegant return to nature: comfortable and eco. A Low Impact Woodland Home Credit for pictures goes to: Simon Dale A lovely home and the one I like most is the hobbit-like house of Simon Dale from Wales. Underground Hobbit House by Glenn Kangiser Pictures Credit: glennkangiser on Photobucket And because we were talking about underground owner built houses this is another interesting one. Subterra Castle, Dover, Kansas Pictures source: Subterra Set on Flickr Malator (Wales, United Kingdom) Source: Wikipedia – Mike Graham

untitled Cartoon Characters Mixed “Cartoon Characters Mixed”… The man behind this awesome idea is Chan Hwee Chong, an art director working at Kolle Rebbe GmbH, Hamburg (Germany). Artist – Chan Hwee Chong Portfolio Tip: USE RIGHT AND LEFT ARROW KEYS ON YOUR KEYBOARD TO MOVE PAGES Tags: Cartoons, Chan Hwee Chong, Germany An SUV That Even Captain Picard Could Love? "Make it so" I've seen lots of pictures of concept car interiors over the years, but the one in the new Nissan Terranaut looks straight out of Star Trek: TNG. From the swivel chairs to the touch screen panels, you could just see Captain Picard or Lt. The Terranaut has positions for a pilot, co-pilot and lab technician/scientist and serves as a mobile science laboratory. Touch pads used to open the doors electrically are covered with a tactile silicon finish while the seats, which all feature air vents in the base and backrests feature ‘breathing’ fabrics. Reflecting the sorts of samples that might be brought into the laboratory for analysis, the design team have adopted the hexagon – the geometric shape of one of the seven crystal systems – as a styling feature. Raised hexagonal sections on the flooring provide extra grip inside the cabin, while even the two sides of the dashboard and the centre console between pilot and co-pilot adopt the six-sided theme. "This is about the Internet.

Walk through "Your Rainbow Panorama" in Denmark EmailEmail Now reaching the rainbow became possible with the new installation named “Your rainbow panorama” of the Danish-Icelandic artist Olafur Eliasson. The new project was opened on the 28th of May 2011 on the top of the ARoS Aarhus Kunstmuseum in Århus, Denmark. Permanent circular vivid walkway of a 150 meters long, 3 meters wide by 3 meters high, gives a 360° colorful view of the city. Eliasson’s creation is 52 meters in diameter (approximate weight of 140 tons), mounted on the 12 columns which are resting on the steel construction on the roof level (around 100 tons). The glass forming the rainbow has all the colors of the spectrum giving visitors a different feeling to their familiar city, bringing brightness to the regular landscape, reminding us of some childhood dreams of walking through the rainbow. [Sources: Olafur Eliasson, ARoS]

Check out my cool home design on Autodesk Homestyler! - StumbleUpon © 2013 Autodesk, Inc. All rights reserved. Use of the service is subject to the Homestyler Terms of Use. Trademarks Autodesk is a registered trademarks or trademarks of Autodesk, Inc., and/or its subsidiaries and/or affiliates. All other brand names, product names or trademarks belong to their respective holders. Third-Party Software Credits and Attributions Apache Ant, Apache HTTP Server Project, Apache Struts, Apache Tomcat, Enunciate and Jets3t are licensed under the Apache License, Version 2.0 (the "License"); you may not use this file except in compliance with the License. Unless required by applicable law or agreed to in writing, software distributed under the License is distributed on an "AS IS" BASIS, WITHOUT WARRANTIES OR CONDITIONS OF ANY KIND, either express or implied. AS2 revision copyright 2004, Richard Wright [wisolutions2002@shaw.ca] JS original copyright 2003, John Haggerty [

Free Amigurumi Crochet Patterns with love for the Nerdy » » Nintendo Amigurumi Kirby with Pattern and Bonus Smash Brothers hats! Kirby Amigurumi Pattern My Kirby pattern has been a long time coming, mainly because I got too ambitious with Super Smash Brothers versions to finish and post it. Initially, in honour of the recent release of Kirby’s epic yarn, the project was going to include patterns for 10 or so Kirby hats, so that he could be more epic and morph into his various SSB versions and be Link Kirby, Mario Kirby, Wario Kirby, you get the idea. As with most things I do though, I got distracted and started working on other stuff and finished up the Mario and Peach hats only, so these will have to do for now. Mario Kirby Peach Kirby Kirby haz a happy! Click to get the Amigurumi Kirby Pattern with bonus Super Smash Brothers hats Legend of Zelda – Toon Link Play Set with Pattern He has a sword and shield Nintendo’s The Legend of Zelda : the Wind Waker is probably my favorite of the Zelda games. Poseable! His sword goes in a sleeve on his back. Red ChuChu

Billboard Design WIN Most Upvoted 1764 votes Watch This Hilarious Southwest Airlines Flight Attendant Do Her Thing 1047 votes By Watching This Video, You Give Money Directly to Dog Adoption Funding in New Zealand 639 votes You've Been Marked! 658 votes This is What Movie Posters Would Look Like if Their 1-Star Amazon Reviews Were on Them 387 votes "The Wig & Pen Is Open for Business" Share Tweet Email Billboard Design WIN Favorite By Unknown Share: 10 Share on twitter Share on google_plusone_share Share on pinterest_share Share on stumbleupon Share on reddit Share on email Reposted by and 152 more... Cheezburger Comments No items at this time... social networking by Facebook Comments Featured Hot Today This is What Movie Posters Would Look Like if Their 1-Star ... This Teen Learns the Hard Way Not to Joke About a Terrorist ... deviantART User Sakimichan Imagines What Famous Animated ... Meet the 12 Gods of the Internet Being a Creep in Public? WTF! How Frozen Should Have Ended Stick Your Head Into an Infinity Box. Follow Cheezburger