Under-Ocean Military Bases: There Is More Than Just One Area 51… See For Yourself. “It is ironic that the U.S. would begin a devastating war, allegedly in search of weapons of mass destruction, when the most worrisome developments in this field are occurring in your own backyard. 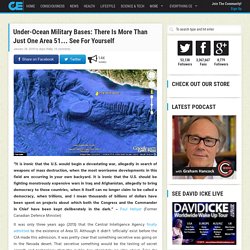 It is ironic that the U.S. should be fighting monstrously expensive wars in Iraq and Afghanistan, allegedly to bring democracy to those countries, when it itself can no longer claim to be called a democracy, when trillions, and I mean thousands of billions of dollars have been spent on projects about which both the Congress and the Commander in Chief have been kept deliberately in the dark.” – Paul Hellyer (Former Canadian Defence Minister) It was only three years ago (2013) that the Central Intelligence Agency finally admitted to the existence of Area 51. Although it didn’t ‘officially’ exist before the CIA made this admission, it was pretty clear that something secretive was going on in the Nevada desert.

The Underground - A Hidden Reality and The True Story of Phil Schneider.mp4. Vatic Note: This is for those who have not seen Phil Schneider before and listened to his seminars about his experiences at Dulce as a geologist, working for the Defence dept of the United States. 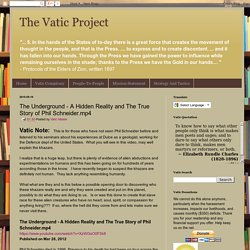 What you will see in this video, may well explain the khazars. I realize that is a huge leap, but there is plenty of evidence of alien abductions and experimentations on humans and this has been going on for hundreds of years according those in the know. I have recently began to suspect the khazars are definitely not human. They lack anything resembling humanity. What what are they and is this below a possible opening door to discovering who these khazars really are and why they were created and put on this planet, possibly to do what they are doing to us.

Tunnels, Walmart & Yorkville - BOP Paulding.com posts - Paulding.com. Due to the enormous amount of emails & PMs received on the tunneling project, I've compiled a synopsis with the corresponding links. 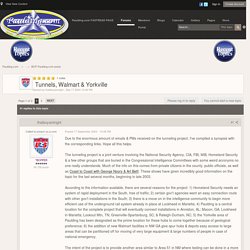 Hope all this helps. The tunneling project is a joint venture involving the National Security Agency, CIA, FBI, MiB, Homeland Security & a few other groups that are buried in the Congressional Intelligence Committees with some weird acronyms no one really understands. Much of the info on this comes from private citizens in the county, public officials, as well as Coast to Coast with George Noory & Art Bell!. These shows have given incredibly good information on the topic for the last several months, beginning in late 2003. The intent of the project is to provide another area similar to Area 51 in NM where testing can be done in a more secure domain. Official Wal-Mart Tunnels of Paulding County Investigation. The Official Wal-Mart Tunnels of Paulding County Investigation In order to further protect the homeland and ensure the safety of it's citizens in case of nuclear, biological, or chemical attack, a join venture of the NSA, DOD, MiB, DHS, CICs, DFCS, and BK has been created in order to create an expansive tunnel system throughout the south. 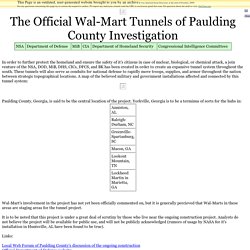 These tunnels will also serve as conduits for national defense to rapidly move troops, supplies, and armor throughout the nation between strategic topographical locations. A map of the believed military and government installations affected and connected by this tunnel system: Breaking Jade Helm Update! First Pictures Of Secret Tunnels Under Walmart Leaked! – Consciously Enlightened.

The folks at ‘Operation Jade Helm And Beyond’ have been receiving tips from Americans all across the nation in regard to all things Jade Helm, and they’ve contacted us with some photos sent to them from one of their tipsters that are absolutely amazing! 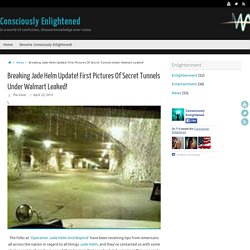 They appear to be what may very well be the first leaked images of the ‘secret tunnel system’ underneath the Walmart stores, that link super secret under ground military bases to each other, all across the nation, that everyone has been talking about! The images are blurry, because they were taken by a low quality cell phone camera and in poor light. Also, the individual who took them was making sure to keep the camera hidden while taking the pictures. 200 underground cities. Tunnels under the USA and Deep Underground Military Bases (DUMBS) See also, Underground Facilities - Bases - Tunnels So the elite are keeping silent about Planet X coming but have been busy building underground cities and interconnected tunnels - hmmmmmm? 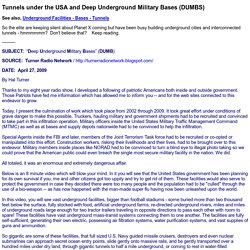 Don't believe that? Keep reading. SUBJECT: “Deep Underground Military Bases” (DUMB) SOURCE: Turner Radio Network / DATE: April 27, 2009 By Hal Turner Thanks to my eight year radio show, I developed a following of patriotic Americans both inside and outside government. Today, I present the culmination of work which took place from 2002 through 2009. Special Agents inside the FBI and later, members of the Joint Terrorism Task force had to be recruited or co-opted or manipulated into this effort.

Secret Underground Bases and Facilities. The history of humanity is laced with stories about secret underground facilities and bases that go back to the beginning and - more recently highlighted with catacombs of many cities - and caves that lead to underground chambers for all sorts of purposes, mostly thought of as clandestine - run by the men in power in a particular timeline. 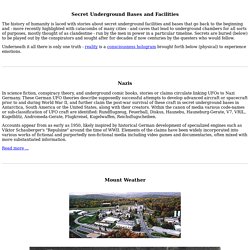 Secrets are buried (below) to be played out by the conspirators and sought after for decades if now centuries by the questers who would fellow. Underneath it all there is only one truth - reality is a consciousness hologram brought forth below (physical) to experience emotions. In science fiction, conspiracy theory, and underground comic books, stories or claims circulate linking UFOs to Nazi Germany. Accounts appear from as early as 1950, likely inspired by historical German development of specialized engines such as Viktor Schauberger's "Repulsine" around the time of WWII. NORAD's headquarters facilities in Colorado are administered by the U.S.