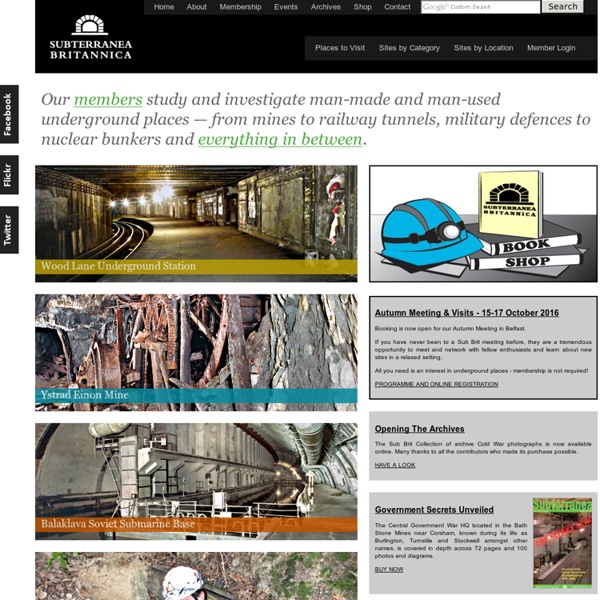 Our members study and investigate man-made and man-used underground places — from mines to railway tunnels, military defences to nuclear bunkers and everything in between. Wood Lane Underground Station Ystrad Einon Mine Balaklava Soviet Submarine Base Staplefield Auxiliary Units OB Opening The Archives

Russian 'grave robber made dolls from girls' corpses' 9 November 2011Last updated at 14:48 Dolls were dressed in grave clothes A suspected grave robber in the central Russian city of Nizhny Novgorod is said by police to have made 29 life-size dolls from mummified female corpses. Local historian and cemetery explorer Anatoly Moskvin, 45, was arrested last week by police investigating a spate of grave desecrations in the area.

Red Bull Soapbox Race UK Monday 01. June 2015 With so many brilliant applications for this years Red Bull Soapbox Race the competition was tough and a number of entrants didn’t make the final grid. However, BP wanted to turn the fortunes of one special team, with their exclusive offer to give one of their consumers the last spot in the Red Bull Soapbox Race! With details of the competition featuring in BP garages around the country, entrants were required to fulfil the same Soapbox application process to be considered for the BP ‘last spot’. 9 secrets and little known things about the London Tube It isn’t just really expensive and subject to delays. There’s more to the London Underground system that meets the eye. It is is one of the oldest and biggest metro systems in the world, with lots of quirks and even its own commuter etiquette. So naturally it’s become a place of intrigue, mystery and secrets. To this day, we are still discovering new or lost things about it, including ghost stations such as Southwark Park earlier this year.

Introducing Canal History Canals in the UK have a long history dating back to the Romans, who built several canals here including the Fossdyke, still navigable today. A long period elapsed after the Romans left Britain when no canals were built. Improvements to rivers were made although the aim of these was often to harness the waterpower, or for fishing, rather than for navigation purposes. It was in the reign of Elizabeth I that the next canal was built, at Exeter, this was also the first use in Britain of pound locks - the type of lock in common use today - all the navigable rivers at that time used flash locks. After this many schemes were introduced for the improvement of river navigations, often provoking strong opposition from water mill and fish weir owners. In 1660 there were 685 miles of river navigation, by 1724 another 475 miles had been added by improvements to many rivers including the Aire & Calder, Douglas, Idle, Irwell, Kennet and Weaver.

Gnome Stew: GMing Geist I was offered the chance to write a GMing article about White Wolf’s upcoming Geist: The Sin Eaters RPG, and I jumped at that chance. Geist is one of the games I’ve been looking forward to most this year, and I’m excited to check it out — and share it with you — a month before it’ll be available in stores. I got a free PDF copy of the full retail game (pictured to the right; here’s a larger cover) from White Wolf, and they made just one request: Don’t share anything about Manifestations, the Twilight Network, the Underworld chapter, and Ceremonies. I don’t need to address those sections to talk about running Geist, so you’re not missing out.

Hidden London Hidden London is excited to offer tours in 2016 for the following locations; Important information Age restrictions: Children under 16 years of age are not permitted onto the tours due to health and safety restrictions.Clothing: Visitors must wear flat sturdy shoes. Guests wearing open toe sandals, shoes or high-heels will be refused entry due to a health and safety requirements.Terms and Conditions: T&Cs for each tour, including arrival instructions, health and safety requirements and ticketing, are available on the individual tour pages and will also be sent via email with your tickets.Priority Booking: Priority booking is offered to members of LTM Friends society and LTM newsletter subscribers. Please note that due to the limited number of tickets available priority booking does not guarantee ticket purchase.

dealing with ghosts - Geist: The Sin-Eaters Welcome to White-Wolf.com. White Wolf Publishing has produced gaming universes for over 20 years including World of Darkness, Exalted, Trinity, and many more. White Wolf merged with CCP Games to focus on translating the World of Darkness IP into a massively multiplayer experience, and the North American office is fully dedicated to making this evolution a reality. Help with an eco build in Pucon, Chile ** ONLY OPEN FOR 3 MORE WEEKS UNTIL MAY !! ** * The project will close for the winter season in the 1st week of May so get in touch quick if you want to join! * We are an English family living in Pucon, Chile who need help with an exciting eco build. We think that you will enjoy our project and we have had over 100 volunteers so far, so don't take our word for it, please read their reviews. We are having gray season with a wonderful team of volunteers.