Crossrail station contract shortlists - TunnelTalk. Bids called for remaining Crossrail stations Apr 2011 TunnelTalk reporting Click on the logos to enter the websites of those who have opened the door for direct access and exploration Major engineering and contracting companies engaged on the Crossrail project to December 2010Hot! 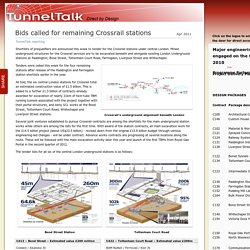 Programme Partner – Transcend, a JV of: London urban explorers. Underground London: adventures in the secret city beneath our feet. At 2am on a cold winter’s night in London last year I was loitering in the shadows on Furnival Street near Chancery Lane tube station with a veteran urban explorer called Lucy Sparrow. 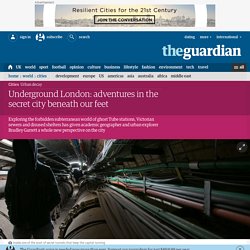 Across the street was a six-storey building with scaffolding haphazardly arranged on its facade, pinioned by a large blue wooden hoarding and an aluminium sign reading: “Caution - deep manhole. Do not enter.” Our fingers were going numb in the cold as we waited for a black cab parked at the end of the street to leave. London Topological – BLDGBLOG. [Image: Embankment, London, ©urban75]. 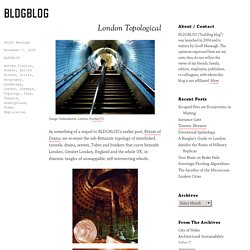 As something of a sequel to BLDGBLOG’s earlier post, Britain of Drains, we re-enter the sub-Britannic topology of interlinked tunnels, drains, sewers, Tubes and bunkers that curve beneath London, Greater London, England and the whole UK, in rhizomic tangles of unmappable, self-intersecting whorls. [Images: The Bunker Drain, Warrington; and the Motherload Complex, Bristol (River Frome Inlets); brought to you by the steroidally courageous and photographically excellent nutters at International Urban Glow]. Whether worm-eaten by caves, weakened by sink-holes, rattled by the Tube or even sculpted from the inside-out by secret government bunkers – yes, secret government bunkers – the English earth is porous. [Images: Down Street, London, by the impressively omnipresent Nick Catford, for Subterranea Britannica; I particularly love the multi-directional valve-like side-routes of the fourth photograph]. 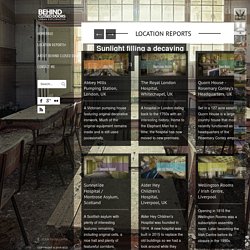 If there’s a way in I’ll take it, take a look around and take some pictures. It’s amazing what you can find behind closed doors. All the photos on this website are taken at locations that are generally considered to be off limits to the public. Forgotten and abandoned places often hold stunning architecture, left to decay. London urban explorers. Underground urban explorers - C�utare Google. Underground urban explorers. Crossrail: Tunnelling beneath London. In exactly four years' time, Europe's biggest infrastructure project will open to the public. 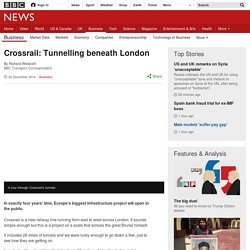 Crossrail is a new railway line running from east to west across London. It sounds simple enough but this is a project on a scale that echoes the great Brunel himself. It includes 26 miles of tunnels and we were lucky enough to go down a few, just to see how they are getting on. I say lucky. You should try climbing down 50 metres of claustrophobic metal staircase in full safety gear and carrying all the camera kit. Subterranean London. These have served a number of purposes: Water and waste[edit] Since its foundation, the Thames has been at the heart of London. 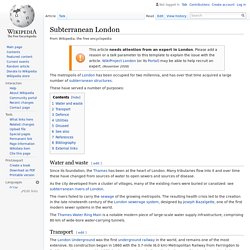 Many tributaries flow into it and over time these have changed from sources of water to open sewers and sources of disease. E: London Topological. Underground London: Secrets of the deep. Hidden London. Hidden London is excited to offer tours in 2016 for the following locations; Important information Age restrictions: Children under 16 years of age are not permitted onto the tours due to health and safety restrictions.Clothing: Visitors must wear flat sturdy shoes. 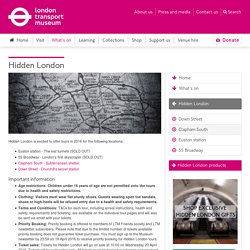 Guests wearing open toe sandals, shoes or high-heels will be refused entry due to a health and safety requirements.Terms and Conditions: T&Cs for each tour, including arrival instructions, health and safety requirements and ticketing, are available on the individual tour pages and will also be sent via email with your tickets.Priority Booking: Priority booking is offered to members of LTM Friends society and LTM newsletter subscribers. Please note that due to the limited number of tickets available priority booking does not guarantee ticket purchase.

9 secrets and little known things about the London Tube. It isn’t just really expensive and subject to delays. 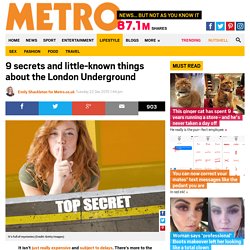 There’s more to the London Underground system that meets the eye. It is is one of the oldest and biggest metro systems in the world, with lots of quirks and even its own commuter etiquette. So naturally it’s become a place of intrigue, mystery and secrets. To this day, we are still discovering new or lost things about it, including ghost stations such as Southwark Park earlier this year. Home - Subterranea Britannica.