Being There: Heidegger on Why Our Presence Matters - The New York Times. The Stone is a forum for contemporary philosophers and other thinkers on issues both timely and timeless. 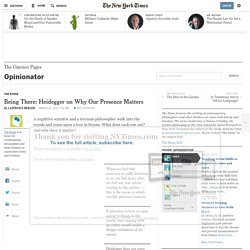 A cognitive scientist and a German philosopher walk into the woods and come upon a tree in bloom: What does each one see? And why does it matter? To see the full article, subscribe here. When we feel that someone is really listening to us, we feel more alive, we feel our true selves coming to the surface — this is the sense in which worldly presence matters. If attention is how we gain access to things in the world, then staying with an entity would enable a deeper revelation of its nature. Heidegger does not even make the distinction between the mental and the physical; for him our experience is an event in the world.

The Stone is a forum for contemporary philosophers and other thinkers on issues both timely and timeless. Other People's Happiness. It’s Not a ‘Stream’ of Consciousness. IN 1890, the American psychologist William James famously likened our conscious experience to the flow of a stream. 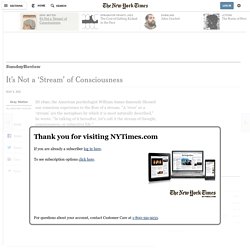 “A ‘river’ or a ‘stream’ are the metaphors by which it is most naturally described,” he wrote. Anatomy of Melancholy. How Facebook Makes Us Unhappy. Don’t Worry, Be Happy. A cynic, Ambrose Bierce remarked in his “Devil’s Dictionary,” is “a blackguard whose faulty vision sees things as they are, not as they ought to be.” 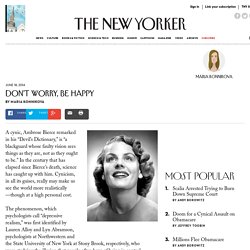 In the century that has elapsed since Bierce’s death, science has caught up with him. Trying to Cure Depression, but Inspiring Torture​ - The New Yorker. In May, 2002, Martin Seligman, the Director of the Positive Psychology Center, at the University of Pennsylvania, was giving a lecture at the San Diego Naval Base. 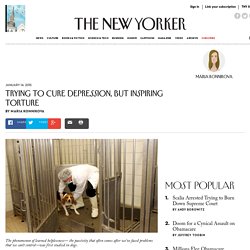 It had been sponsored by the Joint Personnel Recovery Agency, and some hundred listeners were in attendance. The topic of Seligman’s talk was simple: for a good part of his career, he had studied a concept that came to be known as learned helplessness, the passivity that often comes after we’ve faced problems that we can’t control. That afternoon, he wanted to describe how the data his team had collected over the years could help American personnel—military and civilian alike—“resist torture and evade successful interrogation by their captors,” he recalls.

One audience member in particular seemed especially enthused. Who Has the Right to a Dignified Death? In her diary, Godelieva De Troyer classified her moods by color. 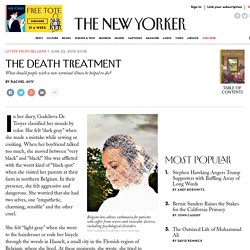 She felt “dark gray” when she made a mistake while sewing or cooking. When her boyfriend talked too much, she moved between “very black” and “black!” She was afflicted with the worst kind of “black spot” when she visited her parents at their farm in northern Belgium. In their presence, she felt aggressive and dangerous.

Maya Forbes’ “Infinitely Polar Bear” In 1996, when Maya Forbes was twenty-eight, an alumna of “The Larry Sanders Show” with a studio development deal, she introduced her future husband, Wally Wolodarsky, to her father, a descendant of two of the older and more prominent families in Boston. 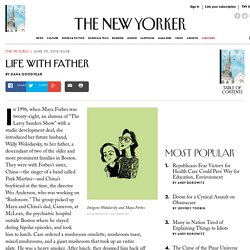 They were with Forbes’s sister, China—the singer of a band called Pink Martini—and China’s boyfriend at the time, the director Wes Anderson, who was working on “Rushmore.” The group picked up Maya and China’s dad, Cameron, at McLean, the psychiatric hospital outside Boston where he stayed during bipolar episodes, and took him to lunch. Cam ordered a mushroom omelette, mushroom toast, mixed mushrooms, and a giant mushroom that took up an entire plate. He was a heavy smoker. After lunch, they dropped him back off at McLean. Armed Guards in the Sanctuary. Brother Darryl Young, a sexton at St. 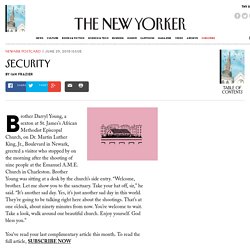 James’s African Methodist Episcopal Church, on Dr. Martin Luther King, Jr., Boulevard in Newark, greeted a visitor who stopped by on the morning after the shooting of nine people at the Emanuel A.M.E. Church in Charleston. Mother Nature’s Melting Pot. The Demise of the White Democratic Voter - NYTimes.com. God, Darwin and My College Biology Class - NYTimes.com. Photo. 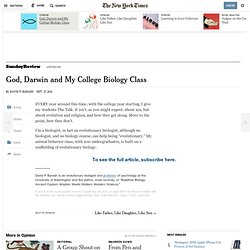 What Should a Billionaire Give  and What Should You? The decline effect and the scientific method. On September 18, 2007, a few dozen neuroscientists, psychiatrists, and drug-company executives gathered in a hotel conference room in Brussels to hear some startling news. 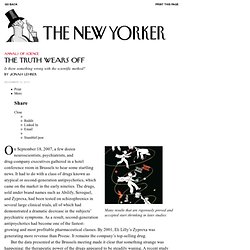 It had to do with a class of drugs known as atypical or second-generation antipsychotics, which came on the market in the early nineties. The drugs, sold under brand names such as Abilify, Seroquel, and Zyprexa, had been tested on schizophrenics in several large clinical trials, all of which had demonstrated a dramatic decrease in the subjects’ psychiatric symptoms. As a result, second-generation antipsychotics had become one of the fastest-growing and most profitable pharmaceutical classes. By 2001, Eli Lilly’s Zyprexa was generating more revenue than Prozac. It remains the company’s top-selling drug. But the data presented at the Brussels meeting made it clear that something strange was happening: the therapeutic power of the drugs appeared to be steadily waning.

The study turned him into an academic star. Welcome to the Age of Denial.