Eco-city Inside a One Kilometer Crater in Siberia 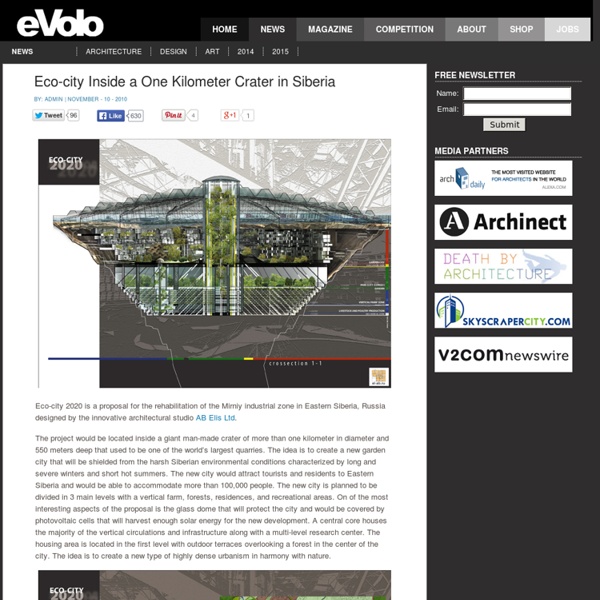 Eco-city 2020 is a proposal for the rehabilitation of the Mirniy industrial zone in Eastern Siberia, Russia designed by the innovative architectural studio AB Elis Ltd. The project would be located inside a giant man-made crater of more than one kilometer in diameter and 550 meters deep that used to be one of the world’s largest quarries. The idea is to create a new garden city that will be shielded from the harsh Siberian environmental conditions characterized by long and severe winters and short hot summers. The new city would attract tourists and residents to Eastern Siberia and would be able to accommodate more than 100,000 people. The new city is planned to be divided in 3 main levels with a vertical farm, forests, residences, and recreational areas. Related:  ideas • Zeitheist

Exploring Abandoned NYC Exploring Abandoned NYC Steve Duncan is a modern day archaeologist, an “urban historian” who employs a rare practice to catalog the history of New York City. Duncan and his videographer partner Andrew Wonder explore the abandoned past of New York below the city streets– from the subway tunnels of yesteryear to the peaks of the city’s bridges. The duo runs through active subway tunnels, climbs through sewers over rushing water, scales massive bridges and does so without detection. Our adoration of abandoned places is no secret here, and we’re certain you’ll be amazed at this 30 minute video. It is at once thrilling and educational, a dangerous look at one man’s quest to document a world below our feet that most could not imagine. Written by: thecoolist on January 3, 2011.

Dome over a new tourist City Using Epcot Business Model for Geodesic Ecodream city By Alvin Wang and Brian Wang Vote for the idea of Domed Cities at the GE Ecomagination competition Over a series of articles (I will link in the other articles as they are written) we will be showing that dome cities can be made profitably and that they can provide energy efficiency and other benefits. This proposed project combines and updates the EPCOT dreams of Walt Disney and the Geodesic domes of Buckminster Fuller with Masdar city scale proof of ground breaking sustainable technology. There are other model planned cities like Masdar city and dozens of green city project in China where entirely new cities are being made to prove out new designs and approaches. The first dome should be designed for large events with the largest covered stages and auditoriums. The O2 (millenium ) dome is a 365 meters diameter dome structure that cost $1 billion and covers 26 acres. - Shanghai expo is expecting 70-100 million tourists. Geodesic domes Stepping up to 5 to 10 times Bigger Thank You

19-Year-Old Develops Cleanup Array To Remove 7,250,000 Tons Of Plastic From Oceans Another young creative mind working towards bettering our world. 19-year-old Boyan Slat has revealed his plans to the world regarding his Ocean Cleanup Array that could remove 7,250,000 tons of plastic waste from the world’s oceans. The revolutionary device consists of an anchored network of floating booms and processing platforms that could be dispatched to garbage patches around the world. Instead of moving through the ocean, the array would span the radius of a garbage patch, acting as a giant funnel. The angle of the booms would force plastic in the direction of the platforms, where it would be separated from plankton, filtered and stored for recycling. It all began when Boyan Slat launched a project that analyzed the size and amount of plastic particles in the ocean’s garbage patches. Once built, it is estimated that the entire clean-up process would take about five years to complete.

Hatching a cheap way to live in Beijing By Jia Xu (chinadaily.com.cn) Updated: 2010-12-01 16:11 Ever imagined what it would be like to live inside a giant egg? Dai Haifei, 24, a newly graduated architect, decided to make his own egg-style home after being unable to afford Beijing’s sky-high rental prices. The two-meter high house with two wheels underneath is made from sack bags on the outside wall, bamboo splints on the inside and wood chippings and grass seeds in between. “The seeds will grow in the natural environment and it’s cold-proof," Dai explained. Dai was inspired to build the 6,427 yuan ($964) home after attending the 2010 Shanghai Biennale Exhibition where he was attracted by a novel architectural project called "City's egg" earlier this year. "I was impressed by the green-notion of building a house like that, especially in cities like Beijing where rental price for a fresh graduate is a huge burden," Dai said.

Robot tests on nuclear sites as UK ramps up research 30 June 2014Last updated at 22:34 ET The UK will copy US Grand Challenges which focus research efforts on tough tasks Robots could soon be roaming over decommissioned nuclear sites and abandoned coal mines in the UK to test their ability to work autonomously. The proposal to create the test sites is one strand of a broad plan that seeks to co-ordinate UK robot research. Drafted by the Technology Strategy Board, it calls for "grand challenges" which see researchers compete to make robots that complete specific tasks. The UK could lead the world in robots, said the authors behind the plan. Cash call The proposals come as Science Minister David Willetts unveils how the Technology Strategy Board will spend the £400m in funds allocated to it over the next year. "Robots have often been positioned as a thing of the future, but today's strategy-launch emphasises the fact that they are very much of the here and now," Mr Willetts is expected to say during a speech on 1 July.

How to Build Self-Discipline Discipline is freedom. You may disagree with this statement, and if you do you are certainly not alone. For many people discipline is a dirty word that is equated with the absence of freedom. In fact the opposite is true. As Stephen R. Self-discipline involves acting according to what you think instead of how you feel in the moment. Work on an idea or project after the initial rush of enthusiasm has faded awayGo to the gym when all you want to do is lie on the couch and watch TVWake early to work on yourselfSay “no” when tempted to break your dietOnly check your email a few of times per day at particular times In the past self-discipline has been a weakness of mine, and as a result today I find myself lacking the ability to do a number of things which I would like – e.g. to play the guitar. If you struggle with self-discipline, the good news is that it can be developed. 1. Discipline means behaving according to what you have decided is best, regardless of how you feel in the moment. 2.

Imposing Concrete Residence in Warsaw: Safe House “Safe House” was designed by Kwk Promes Architects and is located in Warsaw, Poland. The aim of the project was to create a two-level “fortress” that would provide a high level of security for the owners. Which is why the house features movable concrete walls that can pretty much isolate the entire residence when the owners are away for example. US aviation authority clarifies model aircraft laws 30 June 2014Last updated at 08:55 ET According to the FAA, some toy model aircraft are now illegal Hobbyists are concerned new US Federal Aviation Administration guidance classifying first-person-view model aircraft as drones will ground toy planes unless they have a permit. The FAA hopes its list of "dos and don'ts" will make model aircraft safer. But David Schneider, of the IEEE Spectrum, said a child's toy such as the Hubsan FPV X4 Mini RTF Quadcopter would now require a permit to fly. Models must be visible at all times, without vision-enhancing devices. These include: binoculars night-vision goggles powered vision-magnifying devices goggles that give a "first-person view" from the model "Such devices would limit the operator's field of view thereby reducing his or her ability to see and avoid other aircraft in the area," the guidance says. The guidance also states model aircraft can be flown only for recreational - not commercial - purposes. Model aircraft must also weigh 55lb or less.