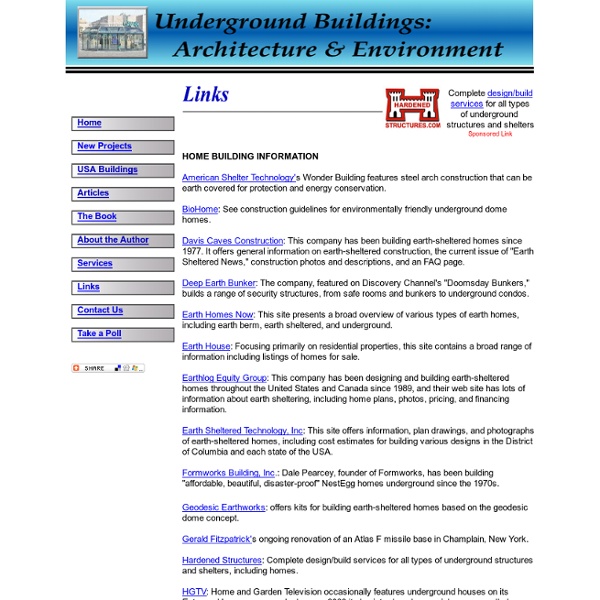 untitled Main Page - Archiplanet Underground living Underground living refers simply to living below the ground's surface, whether in naturally occurring caves or in built structures. Underground dwellings are an alternative to traditionally built above-ground dwellings for some home seekers, especially those who are looking to minimize their negative impact on the environment. Some of the advantages of underground houses include resistance to severe weather, quiet living space, an unobtrusive presence in the surrounding landscape, and a nearly constant interior temperature due to the natural insulating properties of the surrounding earth. The greatest appeal for most is the energy efficiency and environmental friendliness of underground dwellings. When combined with renewable energy sources, energy cost can be greatly reduced. Underground living has been a feature of fiction, such as the hobbit holes of the Shire as described in the stories of J. History[edit] Construction methods[edit] Structures[edit] See also[edit] Notes[edit]

Lawyer Turned Architect Builds Recycled Homes for People in Need, Will Travel to Haiti Photos: BBC Mundo. We've seen houses from recycled PET bottles and even massive homes with glass bottles, though they are usually just a rare experiment by their owners. Not in this case: Bolivian lawyer turned architect Ingrid Vaca Diez helps people in need to build their own homes with recycled materials that, apart from plastic bottles, involve whatever material is available, including expired powder milk and even horse manure. Her project has been so successful that she's being sent to Haiti. Learn more inside.It all began with a request from a little neighbor girl who wanted a room of her own and a lot of accumulated PET bottles in her patio. And so she began building homes with plastic bottles and recycled materials, but not just as a fun hobby, but as a real alternative for people in need. She has already built six of them in Warnes, a town in Santa Cruz de la Sierra, Bolivia; and she's now gone regional with her first house in Roldan, a town in Santa Fe province, Argentina.

Underground Living – Hidden Homes The famous underground houses, unbelievable?!?! Wild? A bit strange? But in time, the situation changed. Cave-house in shape of a human face, Bomarzo, Italy, 16th c, Picture source: Learning from Architecture After thousands and thousands of years things have changed a little… Today’s earth shelter dwellings are a more friendly and elegant return to nature: comfortable and eco. A Low Impact Woodland Home Credit for pictures goes to: Simon Dale A lovely home and the one I like most is the hobbit-like house of Simon Dale from Wales. Underground Hobbit House by Glenn Kangiser Pictures Credit: glennkangiser on Photobucket And because we were talking about underground owner built houses this is another interesting one. Subterra Castle, Dover, Kansas Pictures source: Subterra Set on Flickr Living underground becomes more fascinating when your home is not just an earth-sheltered residence, but an abandoned subterranean missile launch complex. Limehurst, Britain – A Luxurious Underground Mansion

Ashes to houses - High Country News by Jonathan Thompson Nageezi is a small settlement on the far eastern side of the Navajo Nation in northern New Mexico. It’s classic high-desert country, with ponderosa pines and sagebrush and beige cliffs, along with the smattering of run-down housing so often seen on reservations. But among the trailers and tract homes sits one unusual structure, the kind that wouldn’t seem out of place in a chic Santa Fe neighborhood. Its walls are stucco, and in its courtyard, a pergola shaped like a hogan faces the rising sun. Mary and Kee Augustine, Navajo elders, live in this home, which was built in 2005. Each year, along with all the pollution they put into the air, coal-fired power plants in the U.S. collectively regurgitate some 129 million tons of solid waste, about half of which is flyash. In Page, Ariz., however, the Navajo Nation’s housing authority has taken a novel approach to utilizing the stuff. The main structure of the Augustines’ Nageezi home is made of FlexCrete blocks.