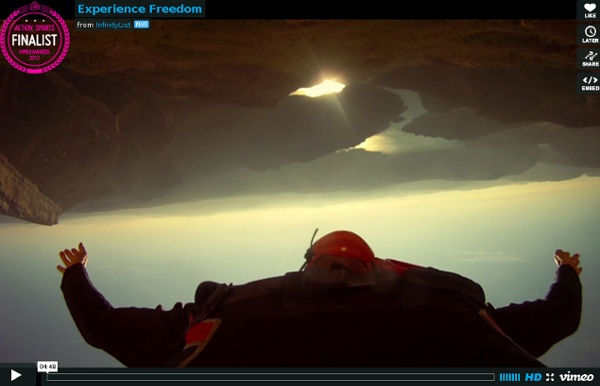 The Epic & The Beasts When we were kids we never dreamt of being a firemen, a pilot or superhero. We always wanted to be skateboarders, jumping up curbs, down the stairs and filp our boards as many times as we could. This has not changed until today. TOM KLEINSCHMIDT – RICHARD NAUMERTAT – ERIK GROß OCTAVIO TRINDADE – DAVID RADERECHT – SEBASTIAN LINDA Directed & Edited by Sebastian Lindasebastian-linda.de Music by Giselle – Silk Ianborg Remix Portugal – The Man So American Woodkid Remix Pls support if you like and buy their original music on Itunes. Special Thanks to Ralph Ruthe. Still photos by Erik Groß: flickr.com/photos/erikgross/ hr200.tumblr.com/

Felix Baumgartner’s Top Freefalls Submitted by InfinityList Mission delayed due to weather. Target launch now 5AM PT/12PM GMT on October 9! BASE jumper Felix Baumgartner’s innumerate and incredible jumps are whittled down to just 5 of the best, with a focus on his race against a plane, his BASE jump from Petronas Tower, the unprecedented Wingsuit flight across the English Channel and more incredible feats. Click here to watch the Red Bull Stratos CGI Clip: Watch Felix’s first successful Test Jump here: Experience the world of Red Bull like you have never seen it before. Make The Move – Best Skydive and Base 2012 In theaters July 18th. Channing Tatum and Mila Kunis star in “Jupiter Ascending,” an original science fiction epic adventure from filmmakers Lana and Andy Wachowski. Jupiter Jones (Kunis) was born under a night sky, with signs predicting that she was destined for great things. Now grown, Jupiter dreams of the stars but wakes up to the cold reality of a job cleaning other people’s houses and an endless run of bad breaks. Only when Caine (Tatum), a genetically engineered ex-military hunter, arrives on Earth to track her down does Jupiter begin to glimpse the fate that has been waiting for her all along—her genetic signature marks her as next in line for an extraordinary inheritance that could alter the balance of the cosmos. From the streets of Chicago to far flung galaxies whirling through space, “Jupiter Ascending” is written and directed by the Wachowskis.

18 Breathtaking Action Shots Taken with a GoPro Camera Ever had a problem capturing action shots with your camera? Not if you’re using GoPro. This company makes small, wearable, waterproof and shockproof cameras. Beloved by professional skiers, cyclists, skydivers and surfers it also suits the needs of everyday people because it’s affordable and easy to use. Nick Woodman, the founder of GoPro, said he was inspired to start the company after his surfing trip to Australia in which he was hoping to capture quality action photos of his surfing, but couldn’t, because amateur photographers could not get close enough, or obtain quality equipment at accessible prices. Only a week ago the company presented their latest model – the Wi-Fi enabled HD HERO 3. Enjoy this series of crazy action shots taken by GoPro athletes and fans, watch the video in the end and then do it yourself. You can get GoPro HD HERO3 on Amazon. If you like what you see, check out GoPro cameras on Amazon.com

Venture to the Eiger A couple of my friends who own the snowboarding company BLANK hooked us up with a bunch of sweet snowboards to shoot this video! So special thanks to them, make sure to check out their rad snowboards in the link above, even I approve of them :) My friend Stephen Anderson wrote the score specifically for this video! Film was made by Devin Graham I’m on facebook now!! Besides the Blank snowboarding team hooking us up with their boards, my friends at Star Moose also helped produce this video with me. I also had the help from my friends to shoot this! Here are my friends that helped shoot with me: Jace LeRoy, Grant Mccarty, Aaron Eskaran, Dylan Higginbotham and David Jacobsen. And my friend Jacob Schwarz did the color correcting for this video! As far as a technical standpoint…. We filmed this all in Utah, on the Salt Flats. Canon 5D Mark II Canon 7D Canon T2i GoPro

Best Places To Wingsuit - Wingsuiting If you’re looking for a great wingsuiting destination, look no further. Aside from the breath-taking scenery, these locations are the cream of the crop for wingsuiting fun. If you have the time, set a trip to one of these seven locales to experience wingsuiting like it was meant to be experienced. These are the best places to wingsuit. Skydive Elsinore – Lake Elsinore, California There are several great places to learn how to fly, and Skydive Elsinore in Southern California is one of the best. Troll Wall aka “Carl’s Huge Wall” – Norway So you think you’re ready to wingsuit BASE jump? Tianmenshan – China No wingsuit setting is more stunning than the limestone canyon known as Tianmenshan. Stryn – Norway Norway’s breathtaking geography and ancient legacy of glaciation makes the country one of the best, if not the best, wingsuit BASE jumping destination on earth. The Hinterrugg And “The Crack” – Switzerland Perhaps you’ve seen Jeb Corliss’ “Grinding the Crack” video. The Eiger – Switzerland