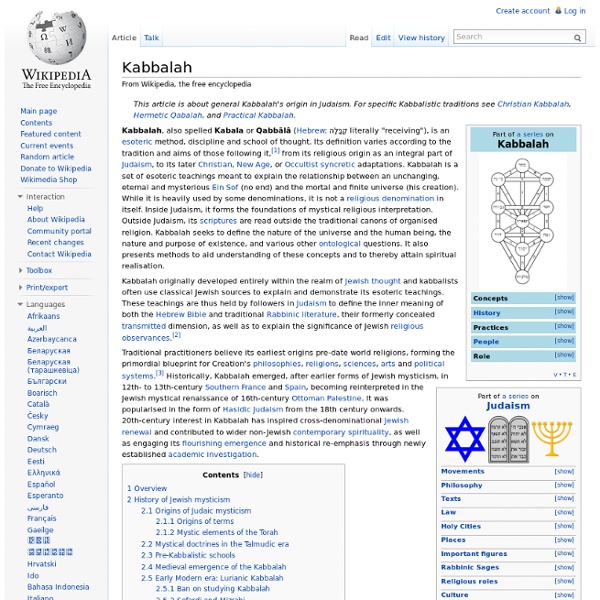 Free Kabbalah Course - Kabbalah Education Center, Bnei Baruch Every Wednesday for 12 Weeks 1) Introduction To Kabbalah What is (and is not) Kabbalah? 2) Where Did You Come From? The ultimate contradiction about having a Creator: If there is a Creator that’s all good and loving, then why is there so much suffering? 3) Who Are You? How do you perceive reality? 4) Where Do Your Thoughts & Desires Come From? The Kabbalistic allegory about the host and the guest and how it relates to you.Three approaches to your thoughts & desires:1) Unconsciously being under their control, 2) Suppressing them, 3) Rising above them.How can you make a change? 5) The Language of Kabbalah: Roots and Branches What is the most common misconception about what the Bible and other Kabbalistic texts describe? 6) How To Make World Peace A Reality Humanity’s globalization and today’s global crisis explained by Kabbalah.How to use nature’s examples to model a perfect existence for humanity.Why have all attempts toward a peaceful existence among humanity failed? 11) Special Q&A Session

Moses Moses (Hebrew: מֹשֶׁה‎, Modern Moshe Tiberian Mōšéh ISO 259-3 Moše ; Syriac: ܡܘܫܐ Moushe; Arabic: موسى‎ Mūsā ) was, according to the Hebrew Bible, the Qur'an, and Baha'i scripture, a former Egyptian prince and warrior,[citation needed] later turned religious leader, lawgiver, and prophet, to whom the authorship of the Torah is traditionally attributed. Also called Moshe Rabbenu in Hebrew (מֹשֶׁה רַבֵּנוּ, Lit. "Moses our Teacher/Rabbi"), he is the most important prophet in Judaism.[1][2] He is also an important prophet in Christianity and Islam, as well as a number of other faiths. According to the Book of Exodus, Moses was born in a time when his people, the Children of Israel, were increasing in numbers and the Egyptian Pharaoh was worried that they might ally with Egypt's enemies. God sent Moses back to Egypt to demand the release of the Israelites from slavery. Name The biblical text explains the name Mošeh משה as a derivation of the root mšh משה "to draw", in Exodus 2:10:

Gilgul Gilgul/Gilgul neshamot/Gilgulei Ha Neshamot (Heb. גלגול הנשמות, Plural: גלגולים Gilgulim) describes a Kabbalistic concept of reincarnation. In Hebrew, the word gilgul means "cycle" and neshamot is the plural for "souls." Souls are seen to "cycle" through "lives" or "incarnations", being attached to different human bodies over time. History of the concept of Gilgul in Jewish thought[edit] The notion of reincarnation, while held as a mystical belief by some, is not an essential tenet of traditional Judaism. Among well known Rabbis who rejected the idea of reincarnation are Saadia Gaon, David Kimhi, Hasdai Crescas, Yedayah Bedershi (early 14th century), Joseph Albo, Abraham ibn Daud and Leon de Modena. The idea of gilgul became popular in Jewish folk belief, and is found in much Yiddish literature among Ashkenazi Jews. Jewish process of Gilgul in Kabbalah[edit] Expression of Divine compassion[edit] Spiritual dimension of all Creations[edit] Above-conscious root of Gilgul[edit]

Oral Torah According to Rabbinic Judaism, the "Oral Torah" or "Oral Law" (Hebrew: תורה שבעל פה, Torah she-be-`al peh, lit "Torah that is spoken") represents those laws, statutes, and legal interpretations that were not recorded in the Five Books of Moses, the "Written Torah" (Hebrew: תורה שבכתב, Torah she-bi-khtav, lit. "Torah that is written"), but nonetheless are regarded by Jews as prescriptive and co-given. This holistic Jewish code of conduct encompass a wide swath of ritual, worship, God-man and interpersonal relationships, from dietary laws to Sabbath and festival observance to marital relations, agricultural practices, and civil claims and damages. According to Jewish tradition, the Oral Torah was passed down orally in an unbroken chain from generation to generation until its contents were finally committed to writing following the destruction of the Second Temple in 70 CE, when Jewish civilization was faced with an existential threat.[1] Components of the Oral Law[edit] Codification[edit]

Derinkuyu Derinkuyu is a town and district of Nevşehir Province in the Central Anatolia region of Turkey. According to 2010 census, population of the district is 22,114 of which 10,679 live in the town of Derinkuyu.[3][4] The district covers an area of 445 km2 (172 sq mi),[5] and the average elevation is 1,300 m (4,265 ft), with the highest point being Mt. Ertaş at 1,988 m (6,522 ft). Located in Cappadocia, Derinkuyu is notable for its large multi-level underground city (Derinkuyu Underground City), which is a major tourist attraction. The historical region of Cappadocia, where Derinkuyu is situated, contains several historical underground cities, carved out of a unique geological formation. They are not generally occupied. History[edit] See also[edit] Notes[edit] References[edit] External links[edit] Coordinates:

Elijah In Judaism Elijah's name is invoked at the weekly Havdalah ritual that marks the end of Shabbat, and Elijah is invoked in other Jewish customs, among them the Passover seder and the Brit milah (ritual circumcision). He appears in numerous stories and references in the Haggadah and rabbinic literature, including the Babylonian Talmud. In Christianity the New Testament describes how both Jesus and John the Baptist are compared with Elijah and on some occasions thought by some to be manifestations of Elijah, and Elijah appears with Moses during the Transfiguration of Jesus. In Islam the Qur'an describes Elijah as a great and righteous prophet of God and one who powerfully preached against the worship of Ba'al. Elijah is also a figure in various Christian folk traditions, often identified with earlier pagan thunder or sky gods. Biblical narratives and historical background[edit] Map of Israel as it was in the 9th century BC. As King, Ahab exacerbated these tensions. 1st and 2nd Kings[edit]

Raghuvaṃśa Raghuvamsa (Sanskrit: रघुवंश, Raghuvaṃśa) is a Sanskrit mahakavya (epic poem) by the most celebrated Sanskrit poet Kalidasa. It narrates, in 19 sargas (cantos), the stories related to the Raghu dynasty, namely the family of Dilipa and his descendants up to Agnivarna, who include Raghu, Dasharatha and Rama. The earliest surviving commentary written on the work is that of the 10th-century Kashmirian scholar Vallabhadeva.[1] The most popular and widely available commentary, however, is the Sanjivani, written by Mallinatha (ca.1350-1450). Geographical and historical references[edit] The warrior Raghu leads a military expedition to Transoxiana. He defeats and subjugates local people along the way (presumably on his march through Central Asia) until he reaches the Vankshu, as the ancient Indians called the Oxus River. After crossing the Oxus, Raghu and his army encountered the Kambojas, an ancient Indo-Scythian people often mentioned in Indian texts. Metres used in the epic[edit] See also[edit]

Abraham Abraham (Hebrew: אַבְרָהָם‎ Abram was called by God to leave his father Terah's house and native land of Mesopotamia in return for a new land, family, and inheritance in Canaan, the promised land. Threats to the covenant arose – difficulties in producing an heir, the threat of bondage in Egypt, of lack of fear of God – but all were overcome and the covenant was established.[1] After the death, and burial of his wife, Sarah, in the grave that he purchased in Hebron, Abraham arranged for the marriage of Isaac to a woman from his own people. Abraham later married a woman called Keturah and had six more sons, before he died at the recorded age of 175, and was buried by his sons Isaac and Ishmael. (Genesis 25:1–10) The Bible's internal chronology places Abraham around 2000 BCE, but the stories in Genesis cannot be related to the known history of that time and most biblical histories accordingly no longer begin with the patriarchal period. Genesis narrative[edit] Abram and Sarai[edit]