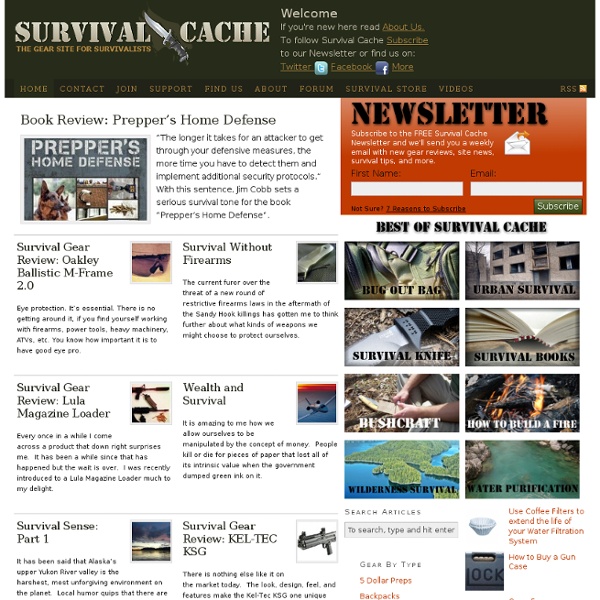 Urban Survival To survive in the urban environment you will need to learn and use and whole new set of skills and tools than you might ordinarily consider in other survival situations. Urban survival techniques and objectives are completely different from the survival skills you would use in the wilderness. Survival Gear Review: Hennessy Hammock Expedition Staying off the ground is not just an important part of back country camping, it can also be a matter of life or death if you are outside the sphere of assistance or in a survival situation. The ground can literally suck the heat from your body.

Clean up your act! by Nanette Blanchard Issue #100 I used to get a headache just inhaling the chemical fumes while walking through the cleaning product aisle of the store. I started using less toxic products from the health food store, but they were so expensive. So I started to make my homemade cleaning products, and the surprising end result is that I clean the house more often. Making nontoxic laundry detergent and dishwashing liquid saves money and helps the environment. The surprising thing is how well these cleansers work. Constrictor knot History[edit] First called "constrictor knot" in Clifford Ashley's 1944 work The Ashley Book of Knots, this knot likely dates back much further.[5] Although Ashley seemed to imply that he had invented the constrictor knot over 25 years before publishing The Ashley Book of Knots,[1] research indicates that he was not its originator.[6] Ashley's publication of the knot did bring it to wider attention.[7] Although the description is not entirely without ambiguity, the constrictor knot is thought to have appeared under the name "gunner's knot" in the 1866 work The Book of Knots,[8][9] written under the pseudonym Tom Bowling.[10] in relation to the clove hitch, which he illustrated and called the "builder's knot". He wrote, "The Gunner's knot (of which we do not give a diagram) only differs from the builder's knot, by the ends of the cords being simply knotted before being brought from under the loop which crosses them

Survival Food – 56 food supplies from the store When disaster strikes, there’s a pretty good chance your local grocery stores are going to be stripped bare in a matter of hours. From panicked people trying to stock up on last minute supplies, to those who failed to prepare for even short-term disasters and now find themselves facing the prospect of starving, your local grocery store is going to look like a battleground in a post-apocalyptic movie. Most grocery stores have a maximum 3 day supply of goods on hand before they run dry. That means even short-term disasters like hurricanes, floods and earthquakes can cause supply chain problems that will quickly wipe out their inventory. Now throw in a long-term disaster that cuts of supplies for months, and you have a real recipe for disaster.

100 Items to Disappear First 100 Items to Disappear First 1. Generators (Good ones cost dearly. Gas storage, risky. Noisy...target of thieves; maintenance etc.) 2. Water Filters/Purifiers 3. Portable Toilets 4. MOLLE/PALS Webbing Belts Items marked "(R)" No Export, No Paypal, NO EXCEPTIONS Contact Us: Email: optactical@yahoo.com Phone: 919-818-3649 Address: 513-B Pershing Rd, Raleigh NC 27608 Store Hours: Monday-Friday, 7:30am-3:30pm Eastern Standard Time (EST) Walk-In Customer Hours: 8:00am-2:30pm Shipping:Fedex Overnight, Two Day and Three Day orders must be received by 2:00PM EST to go out same day. $7 Standard Shipping to any US or APO Address! Vanishing Point: How to disappear in America without a trace Where there's water, life is possible. True, it may be very difficult and very hard to live, depending, but anyone who's driven, hiked, or camped in the American South West will have noticed that cities and ranches crop up where there's surface water or where there's been a well dug. Within the state of California, Nevada, Arizona, Utah, New Mexico, and Colorado, there are deserts, mesas, mountains, and forests where normally people never or rarely visit; not-so-secret places where there's water, access to a road within a day's hike, and where a fairly rugged individual may hide while remaining basically healthy, marginally well fed, and reasonably sane. In this section I'll look at two such environments, neither of which I would recommend, but one of which I'd suggest is a reasonable way to live in basic health while either on the run, hiding out from the law, old girl friends, the draft for an illegal war, putative wives and such.

How to eat wild stuff and not get poisoned (how-to) Let's play pretend for a moment. Are you with me? Let's pretend you can't go down to the supermarket for food to eat. GammaPix Lite The GammaPix(TM) Lite App, developed initially for several federal agencies, turns your phone into a detector of ionizing radiation. This isn't one of those fake Geiger counters. The GammaPix technology has been successfully tested at independent labs with calibrated sources.