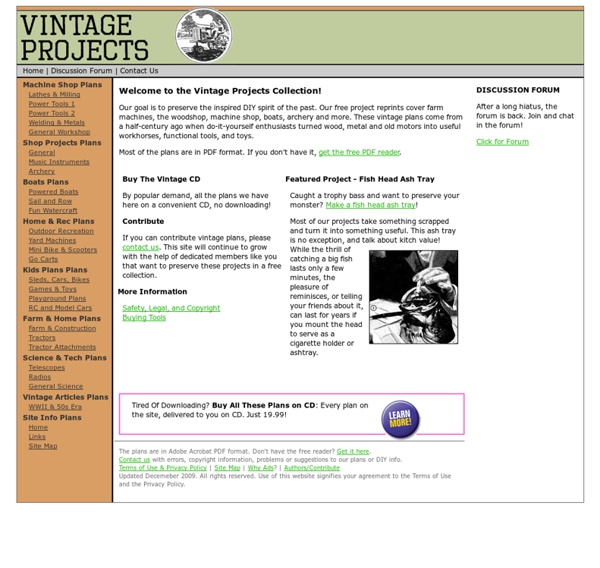 How to Make a Pinwheel. As the summer comes, children like to play outside while I try to be indoors like a rat. A pinwheel is a perfect toy, and easy, for children that likes to play outside. Here is how to build one. Before starting this project, please read the disclaimer located in the main menu. Now I can have lots of fun with my pinwheel. CNC Laser Buildlogs Art deco custom motorcycle Every few months, a bike comes along that completely stops me in my tracks. Like this one: an Art Deco-influenced machine that could have come straight from the pen of Harley Earl. The bike caused a stir last month when it appeared at the Rhinebeck Grand National Meet, a popular motorcycle show held a couple of hours drive north of NYC. Word started to spread. The machine is apparently based on a 1930 Henderson—presumably the 100 mph (160 km/h) Streamline model—and was built in 1936 by a gent called O. As a marque, Henderson is unfortunately consigned to the annals of history, despite a short-lived attempt to revive the name in the late 90s. [First four images by kind permission of Grail Mortillaro, © Knucklebuster.

Weekly Checklist Concepts And Designs | Walyou - Part 2 No More Woof Breaks Interspecies Communication Barriers How many videos of animals “talking” have you watched on YouTube? Don’t you wish those were real? Atheer One Smart Glasses Enable 3D Interaction with Android Apps The idea of having a 3D display in front of your eyes all day for various activities is not particularly … iPhone Air and 6C Concept Clips Spotted In the Wild Since Apple designers are not capable of coming up with something revolutionary, a design studio from Italy took the liberty … A Bicycle That Helps Purify The Air In a world that’s at least pretending (maybe it actually is) to care more and more about the environment, it’s … Kubo Electric Cargo Scooter Shown Off by Lit Motors Minimising the cost, effort and emissions used when transporting cargo, the Kubo electric cargo scooter has been developed by electric car … World’s Simplest Speaker Is No Thicker than a Sheet of Paper The Robotech Cyclone Actually Exists In Real Life Neurowear Camera’s Shutter Is Triggered by Your Brain

Wonder How To » How To Videos & How-To Articles Tools, Parts, Kits for DIY&#039;ers - Curious Inventor Quilling - Turning Paper Strips into Intricate Artworks Quilling has been around for hundreds of years, but it’s still as impressive and popular now as it was during the Renaissance. The art of quilling first became popular during the Renaissance, when nuns and monks would use it to roll gold-gilded paper and decorate religious objects, as an alternative to the expensive gold filigree. Later, during the 18th and 19th centuries, it became a favorite pass-time of English ladies who created wonderful decorations for their furniture and candles, through quilling. Basically, the quilling process consists of cutting strips of paper, and rolling them with a special tool. It sounds simple enough, but special skill is required to create more advanced shapes like marquises, arrowheads or holly leaves. All through the years, the art of quilling has remained almost unchanged, but new specialty supplies now allow quilling masters to create anything from detailed 3-D figures to wall-sized museum installations. Reddit Stumble

Spark, Bang, Buzz and Other Good Stuff. Dangerous Prototypes | A new open source hardware project every month Studio Photography guide and tips from Photo.net - Pale Moon Why go into the studio? Studio photography is easy because you can get exactly what you want. Studio photography is hard because you can get exactly what you want. Soft light, hard light, hair light, background. Rent or buy? Most big cities have good rental studios that come complete with lights, backgrounds, and often assistants. Ceiling or floor? Decide whether you want your studio to be floor-based or ceiling-based. In a ceiling-based studio, you mount background rollers on the ceiling and a rail system that allow flexible positioning of lights anywhere within a rectangular area. The coolest part of any rail system is the pantograph light support. The Lights Decide what format camera you'll be using. To learn about hot lights, read one of the many good books written for cinematographers on the subject. Sunlight If you have any windows in your studio, you might be able to use the sunlight coming in. Hot Lights Once you know how much light you need, decide whether to go hot, warm, or cold.