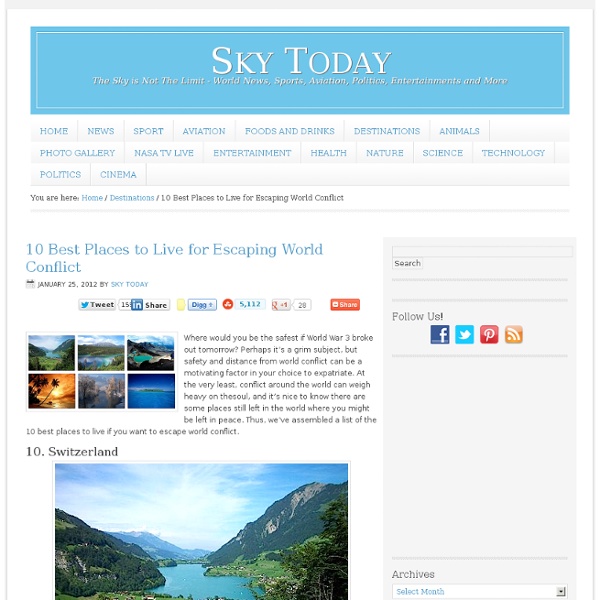 Survival Radio: What Will Work In any type of disaster (Hurricane, Earthquake, Economic Collapse, Nuclear War, EMP Blast/Solar Event, etc) your typical means of communications (Mobile Phones, Land Lines, Internet) will most likely be severed or severely impaired. Now is the time to start your Survival Communications Plan. I know from reading about past disasters and being in the middle of 9/11 myself that when disaster strikes, using your mobile phone (which we are all so heavily dependent on) can be a frustrating experience to say the least. The question that a lot of us have not answered is how are we going to communicate with our loved ones and friends when all traditional communications will be at best unreliable or at worst nonexistent. Options A small group trying to survive in hard times (which, depending from your viewpoint seems to be inevitable), will need to have a plan to communicate with each other as well as some form of back up plan. Things to Consider communicate was by Text Messaging.

Survival Skills: Solar Water Disinfection Largely advocated for developing countries, solar water disinfection is gaining some traction in the survival skills crowd. Imagine an end to boiling your water in order to make it safe. Consider how nice it would be to no longer need expensive water filtration devices or potentially toxic water-treatment chemicals. In reality, solar water disinfection (SODIS) really is a good fit for equatorial countries with abundant strong sunlight and few other resources. Now for the bad news. Is SODIS better than nothing? For more info and additional resources, you can check out the CDC page on SODIS at And if you like to find out more about SODIS organizations which educate our at-risk brethren in the third world, check out

IF DISASTER STRIKES: SAFE ZONES IN AMERICA By Andrew Strom I write this out of genuine concern for the remnant of God in the USA. It is something that I have been wanting to put together for awhile. It is about the many similar prophecies of calamity and physical judgment coming upon this nation. There seems to be a pattern, and I don't want to cause undue alarm, but simply to discuss these things so we are not unaware of them. God will tell you if you need to act on any of this. Since I have been in the United States it has come to my attention that there have been prophetic and praying people from all different places who have had visions, dreams, or strong revelations that concern an apocalyptic disaster striking America. The most unanimous warnings from many quarters concern the West Coast. By no means is the West Coast the only part of America being singled out in a lot of these prophecies. The latter part of a lot of these prophecies and dreams show America being invaded by foreign armies while she is down.

Top 3 multi-purpose survival items With a very limited number of items that you can carry in a survival situation, you need to make sure that some of those items have multiple purposes. Please click on the link below and let me know what you think of this article by security, survival and self-defense expert David Morris. Meet you on the other side. Top 3 Multi-Purpose Survival Items The top three multi-purpose items you should have with you at all times are: Strong cord, such as paracord or parachute cord. Would you choose different multi-purpose items to have in a survival situation? SHTF Plan - When the Shit Hits The Fan, Don't Say We Didn't Warn You.

5 Ways to Prevent Waterborne Illnesses | Independent Living News Native American Survival Skills and Modern Survival Techniques By Jason Knight Having a thorough knowledge base of both modern and Native American survival skills is key to solving difficult outdoor challenges. Oftentimes being in a wilderness survival situation calls upon much of one's mental and physical resources. The more a person knows, the better the chances are that they will not only survive, but thrive in a challenging wilderness situation. With this in mind, in this article I'll share two primary wilderness survival concepts with you, one modern and one traditional. The Rule of Threes One of the most important concepts in wilderness survival is understanding survival priorities. 1) You can survive for three hours without maintaining your core body temperature. 2) You can survive for three days without water. 3) You can survive for three weeks without food. What the rule of threes shows us is that the most important survival priority is maintaining your core body temperature (not getting too cold or hot). "Survival is making works of art."

The Prepper Broadcasting Network Oath Keepers announces 'civilization preservation' teams to be formed across America (NaturalNews) A growing group of military veterans, police officers and first responders has a message for those in the ruling class who seek to impose their unconstitutional will on the nation: "Not on our watch." Members of the group called Oath Keepers have pledged that while they live and breathe - and serve - there are a set of orders they don't ever plan to obey, should they be asked to do so. And they are urging others like them to join as well and make a similar pledge. "Oath Keepers is a non-partisan association of current and formerly serving military, reserves, National Guard, veterans, Peace Officers, and Fire Fighters who will fulfill the Oath we swore, with the support of like-minded citizens who take an Oath to stand with us, to support and defend the Constitution against all enemies, foreign and domestic, so help us God. The group's board of directors has urged its members to begin forming these civilian preservation teams without delay. Read the remaining orders here.

The Man Who Lives Without Money Irishman Mark Boyle tried to live life with no income, no bank balance and no spending. Here's how he finds it. If someone told me seven years ago, in my final year of a business and economics degree, that I'd now be living without money, I'd have probably choked on my microwaved ready meal. The plan back then was to get a ‘good' job, make as much money as possible, and buy the stuff that would show society I was successful. If it hadn't been for the chance purchase of a video called Gandhi, I'd still be doing it today. The change in life path came one evening on the yacht whilst philosophising with a friend over a glass of merlot. We began talking about all major issues in the world – environmental destruction, resource wars, factory farms, sweatshop labour – and wondering which of these we would be best devoting our time to. But that evening I had a realisation. Very few people actually want to cause suffering to others; most just don't have any idea that they directly are. Related:

SHTF School - Real Life Survival Experiences Words from a Bosnian Survivalist | MicroBalrog Words from a Bosnian survivalist Translator’s note: This tale had originally been recorded in french and then translated by two Russian survivalists who met the man. I have read it at hyperprapor’s blog. The Bosnian is anonymous for reasons which will soon be made clear from reading the articles. ~~ MicroBalrog I am from Bosnia. Our city was blockaded by the army and for 1 year life in the city turned into total crap. When it all started some of us were better prepared, but most of the neighbors families had enough food only for a few days. ) or shotguns. After a month or two gangs started operating, destroying everything. The Americans dropped MREs every 10 days, to help blockaded cities. Money soon became worthless. Arms, ammunition, candles, lighters, antibiotics, gasoline, batteries and food. Strength was in numbers. Today me and my family are well-prepared, I am well-armed. Here’s my experience: you can’t make it on your own. 1. The city was divided into communities along streets.