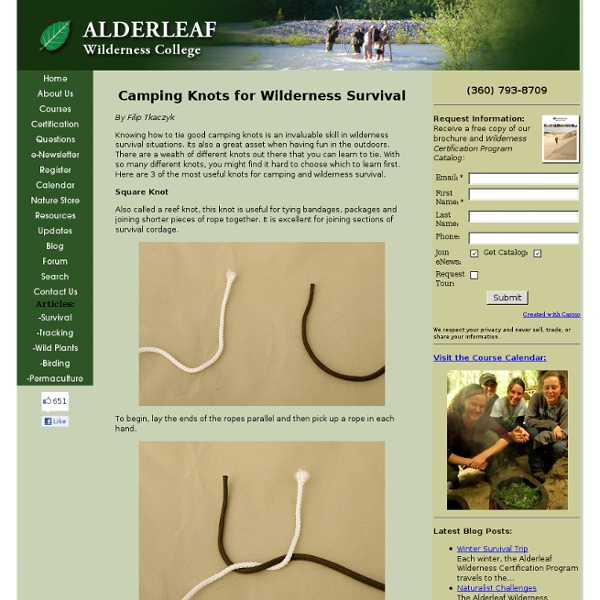 By Filip Tkaczyk Knowing how to tie good camping knots is an invaluable skill in wilderness survival situations. Its also a great asset when having fun in the outdoors. There are a wealth of different knots out there that you can learn to tie. With so many different knots, you might find it hard to choose which to learn first. Here are 3 of the most useful knots for camping and wilderness survival. Square Knot Also called a reef knot, this knot is useful for tying bandages, packages and joining shorter pieces of rope together. To begin, lay the ends of the ropes parallel and then pick up a rope in each hand. Now tie an overhand knot as you would for tying your shoe laces by putting the right end under and over the left rope end. Then tie another overhand knot, this time putting the left end under and over the right rope. Completed Square Knot Clove Hitch Like all hitches, this camping knot ties a rope to an object. To begin, bring the rope end over and under the post. Bowline Related Courses: Related:  Cool Stuff

Would You Live in a Shipping Container? Adam Kalkin isn't the only architect to make homes out of shipping containers. A handful of architects, including Jennifer Siegal and Lot-Ek, began using them ten years ago as a gritty reaction against the tidy white surfaces of modernism. But nobody has employed shipping containers more inventively than Kalkin, a New Jersey architect and artist who has used them to design luxurious homes, museum additions, and refugee housing. In architectural circles, Kalkin is regarded as something of an oddball. He began his talk at the Urban Center in New York Tuesday night by playing the first five minutes of a Jerry Lewis movie, followed by the actor's acceptance speech at the Academy Awards last month. "Adam continues to be subversive, and subvert what architecture is supposed to be," design historian Alastair Gordon said by way of introduction in the panel discussion that followed Kalkin's presentation. For all his artsy provocations, Kalkin's strategy makes some practical sense.

"The egg" - Page 11 You were on your way home when you died. It was a car accident. Nothing particularly remarkable, but fatal nonetheless. You left behind a wife and two children. It was a painless death. And that’s when you met me. “What… what happened?” “You died,” I said, matter-of-factly. “There was a… a truck and it was skidding…” “Yup,” I said. “I… I died?” “Yup. You looked around. “More or less,” I said. “Are you god?” “Yup,” I replied. “My kids… my wife,” you said. “What about them?” “Will they be all right?” “That’s what I like to see,” I said. You looked at me with fascination. “Don’t worry,” I said. “Oh,” you said. “Neither,” I said. “Ah,” you said. “All religions are right in their own way,” I said. You followed along as we strode through the void. “Nowhere in particular,” I said. “So what’s the point, then?” “Not so!” I stopped walking and took you by the shoulders. “You’ve been in a human for the last 48 years, so you haven’t stretched out yet and felt the rest of your immense consciousness. “Sure.

Things My Father Didn’t Teach Me ABOUT ARCHIVE FOLLOW Facebook Twitter Instagram Google+ Ads Via The Deck Things My Father Didn’t Teach Me share it happyfathersday 4,393 notes infoverse - octomatics Backpacks Infographic: How to Find the Right Backpack - REI Need a break from the daily multitasking merry-go-round? Trade in your digital devices for boots and backpacks—they're your ticket to off-the-grid adventures and the wonders of the backcountry! With the right pack and a little preparation, you can head out for a day hike or a through-hike and say "CUL8R" to the daily grind. Add this infographic to your website by copying the code below: <p><a href="

Home Page Do what thou wilt shall be the whole of the Law. E-Books 8 Ball - Ask a Question - Click Here Cast Thermite So you made it through the intro? Good. There's something that must be said before we go any further. I'm not liable. For anything. Do your homework and be sure you know what safety precautions to take when handling something like thermite, such as not looking at it during ignition since it gives off harmful ultraviolet light! Now that that's out of the way, onto the fun part. The first thing to do is understand what thermite is made up of. What we need: Fine (0000) Steel Wool (not pictured)AluminumSome kind of scalePlaster of ParisHandling materials (spoon, cup, paper, coffee can...)Some kind of mold to cast your thermite inWhile I'm at it, I'll explain the best way to get a hold of the materials. Steel WoolOff to the hardware store! Finally, you say.

WANTED: The JakPak, a Jacket That Converts Into a Tent As a regular reader of FastCompany.com, you know that we keep sharp about developments in hobotech: From hobo-conventions for techies to rolling hobo shelters. So it's with great excitement that we bring you the JakPak, a jacket that converts into a tent. Previously, we'd only seen student concepts of this sort of idea. But the JakPak--pardon the egregious, vaguely pornographic name--will be available for $250 this spring. It's loaded with features, suited to three seasons of camping (spring, summer, and fall). Granted, the confined space might take some getting used to, but this is pretty genius for overnight hikes where packing tent poles and the like seems excessive.

6 Unconventional Uses for your Dishwasher - DishwashersInfo.com It takes the right mix of ingenuity and desperation to discover new uses for old tools, but whoever first tried steaming a salmon fillet in their dishwasher must’ve been drunk. For folks who are curious about what else their kitchen contraptions can do, here’s a rundown of the most unconventional uses for your home dishwasher. Steam Fish Fillets The best part about steaming fish in your dishwasher—other than novelty of steaming fish in your dishwasher—is how simple it is. If you’re feeling extra adventurous, check out these recipes for dishwasher lasagna and dishwasher potatoes. Wash Baseball Caps Baseball caps can fade and become misshapen in traditional washing machines. For fledgling roller derby enthusiasts, you can also clean knee pads, shin guards, and other sports equipment in your dishwasher. Clean Footwear Okay, so maybe this is crossing the line, but some people aren’t weirded out by feet. Wash Tools Sterilize Toys and Other Nasty Home Products Clean With...