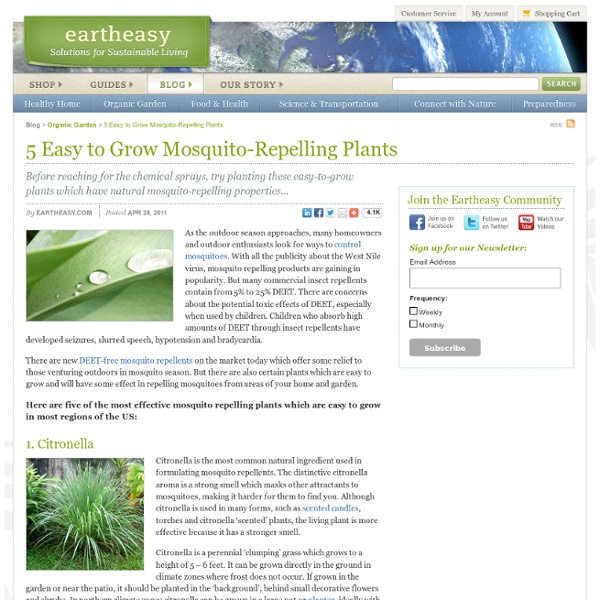 As the outdoor season approaches, many homeowners and outdoor enthusiasts look for ways to control mosquitoes. With all the publicity about the West Nile virus, mosquito repelling products are gaining in popularity. But many commercial insect repellents contain from 5% to 25% DEET. There are concerns about the potential toxic effects of DEET, especially when used by children. Children who absorb high amounts of DEET through insect repellents have developed seizures, slurred speech, hypotension and bradycardia. There are new DEET-free mosquito repellents on the market today which offer some relief to those venturing outdoors in mosquito season. Here are five of the most effective mosquito repelling plants which are easy to grow in most regions of the US: 1. Citronella is the most common natural ingredient used in formulating mosquito repellents. Citronella is a perennial ‘clumping’ grass which grows to a height of 5 – 6 feet. 2. Horsemint leaves can be dried and used to make herbal tea.

10 Plants That Repel Garden Insect Pests 10 Plants That Repel Garden Insect Pests Please be sure to Join our email list and receive all our latest and best tutorials daily – free! Background photo – Yummifruitbat (Wikipedia) lic. under CC 2.5 We’ve been doing some research into plants that repel pests and have compiled a list of 10 plants that can be planted together with other plants as a simple form of insect control. The idea of selecting plants for insect control is not a new one – and is part of the overall subject of companion planting. Companion planting has actually been in use since ancient times; for example the mosquito fern has been planted alongside rice in China for over 1000 years in order to assist with nitrogen fixing and the crowding out of other weeds.

Pruning Hydrangeas A PRUNING STORY: Gail, from Trussville, Alabama, has a beautiful blue hydrangea (actually she has several). The picture on the left, above, shows this hydrangea in early summer, at the height of its glory. As the summer progressed, it became increasingly loose, and the blooms were easily brought down in inclement weather. Gail thought her hydrangea would be much more compact and attractive if it could be pruned. Unfortunately, it was still covered in bloom. Honey and Cinnamon: Natural Cures & Nature's Remedy ~~~~~~~~~~~~~~~~~~~~~~~~~~~~~~~~~~~~~Q. What is the only food that doesn't spoil?A. DIY - Kokedama Hanging Plant String Garden Instructographic Beautiful, fun and creative – everything DIY project should be and this instructographic on how to create your own Kokedama Hanging Plant with String. All you need is a small plant and some twine and a little bit of work and this plant and flower can be hanging from your porch in no time. We like to buy our herb plants at The Growers Exchange. They grow & specialize in farm fresh culinary, medicinal and aromatic herb plants.

Homemade Hummingbird Nectar Recipe Attracting Wild Birds No need to buy the powdered Hummingbird Nectar mix from the store for this rewarding hobby. Instead, make your with this simple hummingbird nectar recipe. You only need water and white sugar – super simple and easy to make. Pruning And Maintenance Of Hibiscus Left unpruned, all hibiscus soon become shapeless and messy, and their flowers fewer, smaller and duller. Most hibiscus are evergreen. Apart from a cluster of species classified as herbaceous, which includes smaller annual or biennial sub-shrubs found growing in the wild, the only two fully deciduous species in cultivation are H. syriacus and H. mutabilis. These two hardy shrubs require heavy pruning to perform well, for like their tropical relations, they flower on new wood. Prune these two species only in winter, when the branches are bare.

Suzy Homefaker: Cinnamon Honey!!! Honey is the only food on the planet that will not spoil or rot. What it will do is what some call 'turning to sugar'. In reality, honey is always honey. Self-sufficiency Self-sufficiency (also called self-containment) is the state of not requiring any aid, support, or interaction, for survival; it is therefore a type of personal or collective autonomy. On a national scale, a totally self-sufficient economy that does not trade with the outside world is called an autarky. The term self-sufficiency is usually applied to varieties of sustainable living in which nothing is consumed outside of what is produced by the self-sufficient individuals. Examples of attempts at self-sufficiency in North America include simple living, homesteading, off-the-grid, survivalism, DIY ethic and the back-to-the-land movement. Practices that enable or aid self-sufficiency include autonomous building, permaculture, sustainable agriculture, and renewable energy. The term is also applied to limited forms of self-sufficiency, for example growing one's own food or becoming economically independent of state subsidies.

5 Secrets To A ‘No-Work’ Garden It took over 20 years of gardening to realize that I didn’t have to work so hard to achieve a fruitful harvest. As the limitless energy of my youth gradually gave way to the physical realities of mid-life, the slow accretion of experience eventually led to an awareness that less work can result in greater crop yields. Inspired in part by Masanobu Fukuoka’s book, One Straw Revolution, my family experimented with gardening methods which could increase yields with less effort. Fukuoka spent over three decades perfecting his so-called “do-nothing” technique: commonsense, sustainable practices that all but eliminate the use of pesticides, fertilizer, tillage, and perhaps most significantly, wasteful effort. Here are the strategies we used which enabled us to greatly increase our garden yield, while requiring less time and less work. 1.