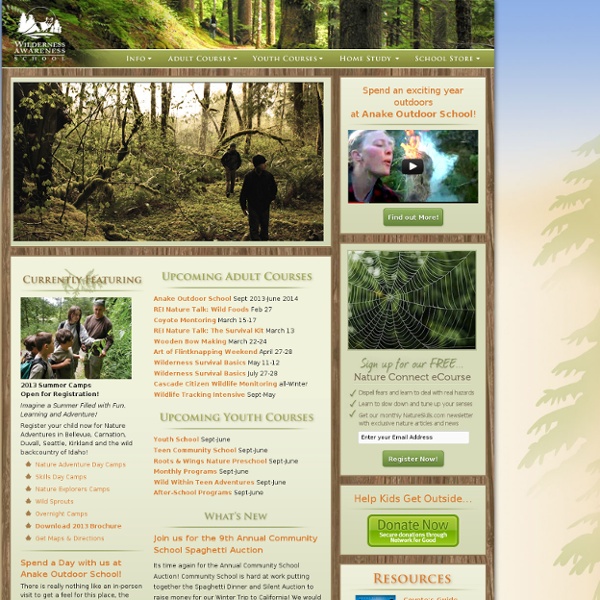 UNESCO ASPNet The UNESCO Associated Schools Project Network, or ASPNet for short, is a program established in 1953 to encourage schools worldwide to educate students on issues related to UNESCO's "overarching goal of promoting peace and international understanding". As of 2008[update], it includes nearly eight thousand educational institutions in over 170 countries. ASPnet schools conduct their own projects, often linking with schools from other countries, or may become involved in a UNESCO-coordinated activity, such as the "World Heritage in Young Hands" project. A national coordinator, typically housed at the National Commission, serves as the liaison between the schools and UNESCO.[1] References[edit] External links[edit] Official website

MacGyver, Survivalist, or Stockpiler: The Urban Survival Skills Everyone Should Know It's your word against his.. If he ain't talkin, your word pretty much wins. Also, don't try draggin him back in your house after he's dead.. The cops will be able to tell he was shot inside your house. As soon as you're involved in a shooting like this, call the cops, then a lawyer.. You are so bad ass. Seriously, you're advocating shooting a potential burglar with your "Mossy, Remy or Mr. We're not all in middle school, you know, and life is not like a Die Hard movie. I don't want to kill anyone. I am not running from my house. You can be a moral coward and subject yourself to the will of a criminal, however I will suffer no such victimization. @jodark It's not cowardly to leave and certainly not morally cowardly to leave if there is an intruder in your house. Unless you were a soldier or a police officer, you have probably not faced a life or death situation, and frankly, you are likely not equipped to fight back adequately.

Three language lessons you can learn from the word “schlemiel” In honor of National Poetry Month, let’s tackle some of the trickiest aspects of meaning — after all, poetry is one of the great ways to express subtle and slippery thoughts. Our focus today is translation. How can someone convey the meaning of a word that has no equivalent in another language? Among the toughest words to translate, and there are some doozies, schlemiel is a top contender. It is a Yiddish word for a chronically unlucky person. The trouble behind “schlemiel” presents us with a common translation problem – the translator will inherently run into words in one language that may not have an equivalent word in the other language. (Curious to learn some of the toughest words to convey in English, like prozvonit and hyggelig? Here are three tools that the skilled translator keeps at hand when faced with an untranslatable word. When confronted with a lacuna (a gap in a piece of writing), a translator may resort to free translation or adaptation. Dr. Mrs. Anonymous

Survive The Zombie Apocalypse Well here we are—2012. End of the world time. Sucks, doesn’t it? We’re not sure how we’re going out, but we’re putting our money on zombies. Yup, zombies. (It’s an outside bet.) 1. 2. 3. 5. 6. 7. 8. 9. Big Picture Decked Out: Zombie Apocalypse Unless you’ve been hibernating in your underground bunker for the last few weeks, you’re well aware that the zombie apocalypse is upon us (just like the Mayans predicted). We’re no suckers, we know there are a few steps we’ve got to take before any Walkers coming strolling into our neck of the woods. Besides settling on the ideal blunt object, we’ve got to have our attire in order. 1.

The First Zombie-Proof House Somehow, ritual drunk-conversation concerning team captains for the apocalypse has become a major part of the lives of 20-somethings. Having been matured in the Grandaddy-crowned masterpiece film (put “A.M. 180” on and forget that you have a job) 28 Days Later and the best-selling Zombie Survival Guide, we’re all a little too ready to deal with the 2012 zombie apocalypse of our dreams. “The Safe House,” designed by KWK Promes, starts to get eerily close to something I could work with, if say 200 bludgeoned members of the undead army came over to eat their way into borrowing some sugar. “The most essential item for our clients was acquiring the feeling of maximum security,” begins the designers’ website in the summary of the structure. The house, with its movable walls, has only one entrance, which is located on the second floor after crossing a drawbridge.