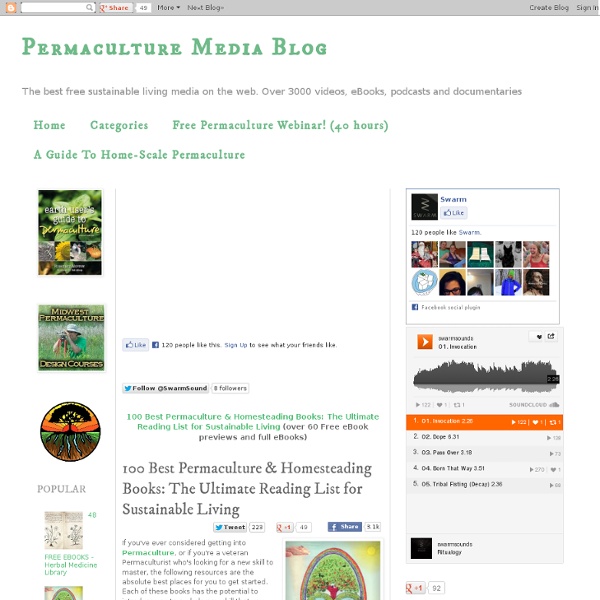 If you've ever considered getting into Permaculture, or if you're a veteran Permaculturist who's looking for a new skill to master, the following resources are the absolute best places for you to get started. Each of these books has the potential to introduce you to a whole new skill that you can enjoy for literally the rest of your life! You will find here links to over 60 Free eBook previews and full eBooks! Feel free to post down at the bottom if there are other books you would include on this list. Enjoy and Share with Your friends! Sophia Permaculture - Introductions to the Subject Gaia's Garden, Second Edition: A Guide To Home-Scale Permaculture by Toby Hemenway - The first edition of Gaia’s Garden sparked the imagination of America’s home gardeners, introducing permaculture’s central message: Working with Nature, not against her, results in more beautiful, abundant, and forgiving gardens. eBook preview: Gaia's Garden, Second Edition Permaculture - More in depth Forest Gardening Related:  Permaculture

How to Grow Perennial Vegetables This is the latest offering from the prolific and encyclopedic Martin Crawford of the Agroforestry Research Trust in Devon where he has tested a huge number of plants of all kinds in his two acre forest garden, established 20 years ago. For a low maintenance, food producing design, such as a forest garden, perennial vegetables can provide an ideal understorey or ground cover accompaniment to a top storey of fruit and nut trees – and Martin has proved that there are a great many such plants available for all niches. The book's design is elegantly straightforward with the first quarter covering the practical issues involved, such as: the reasons for growing perennial veg; how to design them into a garden, and how to grow and look after them. The rest of the book looks at many perennials that can be used productively. As well as vegetables, also included are grains, tubers, aquatic plants and some vegetatively edible trees. Further resources Plants and recipes to bridge the hungry gap

Environmental Documentaries "We are seeing how very important it is to bring about in the human mind the radical revolution. The crisis is a crisis in consciousness. A crisis that cannot anymore accept the old norms, the old patterns, the ancient traditions, and considering what the world is now with all the misery, conflict, destructive brutality, aggression, and so on, man is still as he was, is still brutal, violent, aggressive, acquisitive, competitive, and he has built a society along these lines." –Jiddu Krishnamurti The Zeitgeist Movement is not a political movement. This movement is about awareness, in avocation of a fluid evolutionary progress, both personal, social, technological and spiritual. An important association, upon which many of the ideas of this movement are derived come from an organization called " The Venus Project" directed by social engineer and industrial designer, Jacque Fresco. Please visit the official website for more information:

Why YOU Should Raise Rabbits Rabbits produce manure that is arguably the BEST for the gardeners' purposes. It is ready for use with absolutely no composting: no building bins, no heavy work turning the piles, no trucking in loads of manure from animals who may be heavily medicated. Just park an old wheelbarrow under the cage if you like, wheel to the garden, and dump. If you want to water houseplants or tender seedlings, make a manure tea using a quart or more of rabbit droppings soaked in five gallons of water. When the whole of the manure is mixed into soil for growing vegetables, its combination of available nutrients and well broken-down fiber mulch gives incredible results. So what's the cost? What does this splendid organic manure cost? And there would be double satisfaction: at first, saving some small animal lives that would otherwise be wasted. Meat Production Rabbits are the most economical, labor efficient, and practical way to produce protein.

Punk Rock Permaculture E-zine Sowing Seeds in the Desert: Natural Farming, Global Restoration & Ultimate Food Security Masanobu Fukuoka's first book, The One-Straw Revolution, introduced natural farming, a nature-integrated practice similar to 'original' permaculture, to a world where the environmental movement had just begun. As this plant pathologist-turned-farmer-philosopher journeyed around the world as a result of the popularity of his book and ideas, Fukuoka was shocked at the environmental degradation and desertification he saw. Sowing Seeds in the Desert, his final book, is his plan to set a 'Second Genesis' in motion: a green revolution led by vegetables, grasses, and trees. Natural farming isn't just another 'method' but rather a way of thinking and living that goes beyond even organic farming. Fukuoka examines science, economics, politics and medicine, arguing that humanity's quest for knowledge and wealth only increases the divide between ourselves and nature, resulting in illness, unhappiness and a deeply damaged planet. This review first appeared in Permaculture magazine issue 75

West Coast Food Forestry A Journey of Transition: Becoming a Professional Permaculture Designer - PermacultureNews.org by Dan French Photo © Craig Mackintosh Like the title suggests, I’m going to write a few articles about my journey to becoming a professional permaculture designer… if you don’t mind? I’m doing this for a few reasons: to help me articulate and formalize what it is I’m doing; to tell others who might be interested in doing the same about my ups and downs; to gain exposure and fast track my development as a designer; and perhaps, on some sadistic level, to just put a bit more pressure on myself. I grew up in the Adelaide hills, on the top of the ridge where the elements are in full swing, alongside a national park. During my previous professional lives, I spent many moments wondering what it would be like to break the shackles of endless corporate procedures, boring reporting and restriction of action by various legislative approaches. Just like a religion, it seems permaculture is expressed in many forms. Ok, enough gas-bagging.