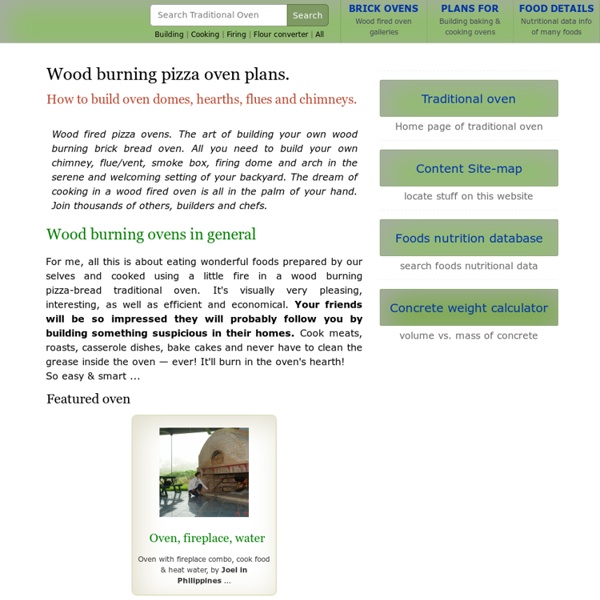 Caos na Cozinha Pizza oven plans - Build an Italian brick oven - Forno Bravo An Introduction to the Pompeii brick oven The Pompeii is a diy pizza oven in an Italian brick oven tradition. We offer a free set of downloadable pizza oven plans in our store, as well as a two pizza ovens kits for those who don’t want to source it themselves: the Pompeii 90 and the Pompeii 110. The Pompeii wood fired oven is constructed using firebricks, high temp mortar, insulation, along with other materials easily found at building supply stores (Home Depot, Lowe’s, B&Q, etc.), many of which we sell on our online store under product installation supplies. Much like Open Source Software, the plans are freely accessible for your use. Alternatively, you can order the Forno Bravo CD ROM. If you are ready to build a Pompeii Oven at your house, be sure to check out the Forno Bravo Pompeii Oven Kit product page. Wood fired brick ovens and retained heat cooking have been with us since the dawn of civilization. Brick oven size Getting Started How the Online Plans Work

Build Your Own $20 Outdoor Cob Pizza Oven | The Year of Mud I must admit, I’m a bit of a breadhead. Few things are as exciting to me as freshly baked bread with a dab of butter, or hot and greasy scallion pancakes, or fluffy and airy naan, or a pizza fresh from the hearth of a wood-fired cob oven. (That last one trumps all the others.) I thrive on bread. Earlier in the year, the idea of baking in the outdoors in a wood-fired oven became something of a romanticized (in every positive sense of the word) notion to me. So I picked up a copy of Kiko Denzer’s Build Your Own Earth Oven, a little gem of a book covering the construction of cob ovens from the ground up. How To Build an Outdoor Pizza Oven The Foundation With little more than some clay, sand, sawdust, brick, some recycled beer bottles and old cinder blocks, I had everything I needed to make my own oven. The Fire Brick Oven Hearth An insulating layer of beer bottles in a sawdust/clay mortar was assembled on top of the foundation in a ring of cob and beneath the firebrick hearth.

Better Outdoor Pizza Oven Building Plans | The Year of Mud Learn how to build this outdoor oven in this new how-to Several years ago, I wrote about how to build (the now-infamous) $20 outdoor cob oven. That oven I built worked decently, produced a lot of delicious meals, and advanced my pizza baking fever to new heights. Since then, we’ve built several more outdoor pizza ovens, and each of them has been a great improvement upon the original. This newer model is slightly bigger, allowing for easier access to the oven interior, it has even more food baking potential, and the insulation is vastly superior. This is a very achievable, low cost, and effective oven that will not cost you thousands of dollars to build. The Better Outdoor Pizza Oven Plans: Overview The oven I will propose and outline below is a highly insulated cob oven. The oven is no slouch in the baking department, either. Ok, let’s get on with the building plans… Don’t Just Throw it Anywhere: Siting Your Oven Build a Sheltering Roof Dig a Drainage Trench Cob ovens are extremely heavy.

Kitchen Cleaning Help - Cooking Tips Read these 21 Kitchen Cleaning Help Tips tips to make your life smarter, better, faster and wiser. Each tip is approved by our Editors and created by expert writers so great we call them Gurus. LifeTips is the place to go when you need to know about Cooking tips and hundreds of other topics. Old Toothbrushes Come in Handy Save those old toothbrushes. Microwave Cleanup Cooking tips: clean up time! Cleanup Greasy Dishes To cut grease and odor on dishes when doing kitchen cleaning, add a tablespoon of vinegar to your hot soapy water. Cleaning your oven Kitchen cleaning help: To remove grease from inside your oven when doing kitchen cleaning, put a small pan of ammonia in the oven in the evening, and then close the oven door. Removing Melted Plastic From Your Glass Cooktop It happens. A Pantry Problem Solver Sometimes the solutions to your problems are as close as your pantry shelf. Egg on the Floor If you drop an egg on the floor, cover it with salt and leave it alone for a couple of minutes.

Pane Valle del Maggia Pane Valle del Maggia February 23, 2014 Several bakers on The Fresh Loaf have shown us their bakes of “Pane Maggiore.” This bread comes from the Swiss Canton of Ticino, which is the only Swiss Canton in which Italian is the predominant language. While the Ticino Canton has Lake Maggiore on its border, the name of the bread supposedly comes from the town of Maggia which is in the Maggia valley, named after the Maggia river which flows through it and enters Lake Maggiore between the towns of Ascona and Locarno. I was interested in how this bread came to be so popular among food bloggers. For your interest, here are some photos from Petra's blog of this bread as she bought it in it's place of origin: Pane Valle del Maggia. Pane Valle del Maggia crumb. After this bit of backtracking research, I ended up with four … or is it five? Josh’s approach used two levains, one fed with freshly-ground whole wheat flour and the other with white flour plus a touch of rye. Procedures Happy baking! David

1. Building a Clay Oven – The Basics | The Clay Oven Welcome to the first installment of building a clay oven. This post will cover: Background – including what is a clay oven? Background The Finished Clay Oven in My Garden I assume that most people who have found this site will already know what a clay oven is, however it is probably useful if I define what I mean by a clay oven for the purpose of this blog. In my definition then, a clay oven is any hollow, dome-shaped structure constructed out of clay, clay and sand or clay and straw, used for the purpose of baking and roasting food. Clay ovens are amazing things. Building your own clay oven is not difficult. What you will need – Materials and equipment OK lets crack on with getting this baby built! Materials Builders sandClayWaterRubble / hardcoreWood shavingsNormal building bricks (e.g. Equipment Saw (chainsaw?) The Build Order So you have your equipment and materials list. How Long Does it Take to Build a Clay Oven? How Long will a Clay Oven Last? Like this: Like Loading...