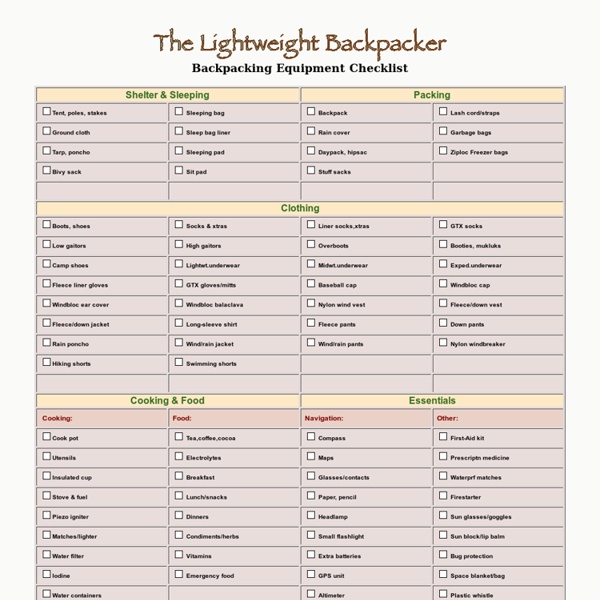 Zen Backpacking - Ultralightweight Backpacking Packing List Contact: Ultralightweight Backpacking Packing List For backpacking, less is more. Traveling ultralight means that you carry just enough to stay alive and have move easily since you only carry a feather weight pack. Paracord Carabiner Spool This was a project I'd tried a couple of years ago that wasn't working like I wanted at the time, so it's been on the unfinished 'to do' list too long. This time I ended up with a much better working model. The paracord is zigzag spooled(like you may find with cordage you buy from store that comes on a spool) onto the PVC pipe over the carabiner. With the carabiner held in hand or secured to gear, the cord can be pulled off and quickly deployed from the free spinning spool. If the ends of the spool were flared/capped, keeping the cord from spilling off the spool, it would be easier to coil cord onto the spool... The biner I used is an Omega Locking D Carabiner that I've had for almost 20 years, that has a tubular formed body compared to some that have odd shaped cross sections.

5 Unexpected Skills Needed on an Ultra-Backpacking Adventure Editor’s Note: This is a guest post from Tony DiLorenzo from Fit Marriage. From the Mexican border to the vast expanse of the Sierra Nevada Mountain range to snow-capped Mt. Rainer and beyond, there is truly nothing like leaving everything behind to hike the Pacific Crest Trail (PCT). Each year, around 300 brave souls attempt to “thru hike” the entire 2,650-mile trek, experiencing six of the seven North American ecozones in the process. As I experienced firsthand, adventure awaits along every step of the PCT, as you wake to the sun and lay your head to rest at dusk at the end of each demanding day. Ham Radio Practice Exams Number of valid questions, current exams Tech = 394 General = 456 Extra = 700 Select the exam you would like to take below by selecting the button next to the license class. Then click on the 'Take Exam' button. You will be given a mock exam. Select your answer to each question and then submit them to the eHam.net examiner robot.

25 Habits of Highly Effective Hikers Backpacker Magazine – August 2008 by: Michael Lanza, Illustrations by Colin Hayes Some people just have more fun. Making Campfire Twists Twists are incredibly easy to make. They are unleavened bread as they contain no yeast or sourdough culture. It costs about 30p (60c? but we're in rip of Britain, so probably cheaper in the states) to make about 12 twists Ingredients: 500g Self raising flour 3 Tablespoons of sugar 300-500ml of water Optional: Jam! Mountain UltraLight: Make Your Own Backpacking Meals! My 14 day John Muir Trail thru-hike with my son is just a few weeks away, so I've been busy preparing 28 days worth of backpacking food for us. Making your own is not that difficult, less expensive, and much lighter than buying those individually packaged meals. Are you up for the task? A healthy hot breakfast is pretty easy. My favorite is couscous, dry milk, dried cranberries, chopped almonds and cashews. 15 1/2 ounces yields 2,240 calories, or seven 320 calorie breakfasts. Add some variety by replacing the couscous with rolled oats, which is a bit heavier but also very nutritious.