Welcome to The Sietch - Projects Build Your Own Solar Thermal Panel 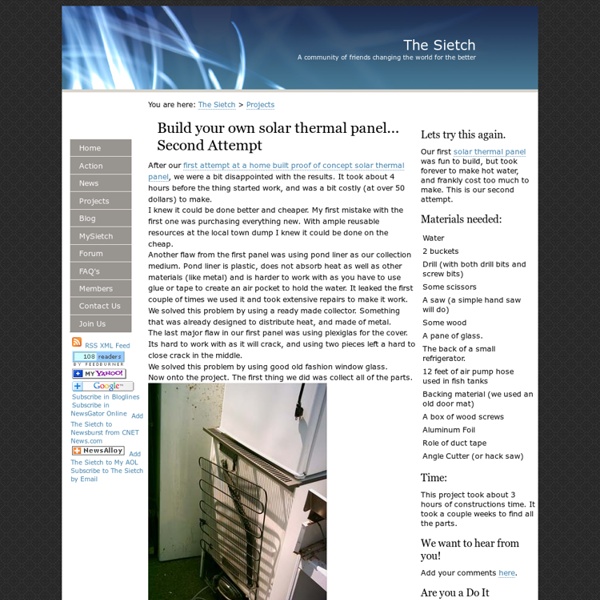 After our first attempt at a home built proof of concept solar thermal panel, we were a bit disappointed with the results. It took about 4 hours before the thing started work, and was a bit costly (at over 50 dollars) to make. I knew it could be done better and cheaper. My first mistake with the first one was purchasing everything new. Another flaw from the first panel was using pond liner as our collection medium. We solved this problem by using a ready made collector. The last major flaw in our first panel was using plexiglas for the cover. We solved this problem by using good old fashion window glass. Now onto the project. Our local dump has a coolant removal program that has refrigerators and dehumidifiers that they remove old freon from. Make sure that the freon, or other coolant has been removed, and cut the grill off at the base, near the large coolant holder. I found a pane of glass and an old rubber door mat that made the perfect backing and front. Enjoy the hot water. Related:  Permacultura • SURVIVAL

A Practical Zeer Pot (evaporative cooler / non-electrical refrigerator) A zeer pot is an evaporative cooler used in rural Africa and the Middle East to keep vegetables fresh. They consist of two terra cotta pots, one nested inside the other, with the gap between them filled with wet sand. The sand serves as a thermal mass that helps keep the pot cold once it has cooled down, and acts as a wick to spread the moisture up the walls of the pot. Unless the air is very dry and the pot is exposed to a constant breeze, they generally do not become as cold as a refrigerator, but they will keep vegetables fresh for a couple of weeks. Think of it as an open-cycle refrigerator. Zeer pots were re-discovered and popularized in the early 2000s by the Nigerian teacher Mohammed Bah Abba. In the under-developed parts of Africa and the Middle East, zeer pots use custom made pots prepared by local potters. What makes this zeer pot practical? There are other zeer pot instructables out there, but this one is optimized for practicality. Parts list with prices

Berkey Water Filter Systems - World Leader in Portable Water Purification The Quest for Sustainable Living 25 Tips For Making Camping Easier & More Fun! This is one of those posts that really has no rhyme or reason to it….other than it interested me! Maybe it’s the fact that my nephew Nate just bought a camper, or maybe it’s just that time of year, but for some reason I’ve had camping on the brain and I’ve seen a few very cool ideas recently that I thought if I WERE to go camping…I would probably take advantage of! :-) We actually don’t do much camping…but we love being outdoors and having bonfires in the backyard. Tacos in a Bag - Camping With Gus A quick camp meal with almost no clean-up, but lots of novelty, that your kids will be talking about long after the camping trip is over. Reading Lamp - Flickr.com A simple system that is easy on the eyes. Campfire Cones - Kids Activities Blog These “S’more Cones” are yummy and super easy to make! Solar-Powered Lights - Field and Stream Put solar-powered garden lights near tent stakes, so you don’t trip over the lines at night. Camping Scavenger Hunt - The Creative Homemaker So….what do you think?

How to Build a Top Bar Beehive - Part 1 with Design Plans - Art and Home by Jon PetersArt and Home by Jon Peters Here’s a how to video on building a new top bar beehive using thermally treated poplar. You can also print the complete design plans, and parts list which is posted below to build your own hive. The 2 new top bar hives, side by side How the bars fit in the body of the hive Attaching the sides to the hive JON PETERS ART & HOME – helpful links: Facebook Youtube Instagram Ebay Store 7 Survival Tips That Could Save Your Life. #2 Is Awesome! Have you ever wondered how to filter water, keep away the mosquitos or how to make a solar microwave? These tips might save your life one day. 1. Need some light in a pinch and a candle alone won’t cut it? Grab a soda can and cut open the sides, fold them out and place the candle in. This will reflect your light and give you some decent protection from the elements. 2. 3. 4. 5. 6. 7. For a visual preview of all of the tips in this list, watch the video! Credits: HouseholdHacker

FlameStower EWAO If there’s anything you read – or share – let this be it. The content of this article has potential to radically shift the world in a variety of positive ways. And as Monsanto would love for this article to not go viral, all we can ask is that you share, share, share the information being presented so that it can reach as many people as possible. In 2006, a patent was granted to a man named Paul Stamets. Though Paul is the world’s leading mycologist, his patent has received very little attention and exposure. Why is that? What has Paul discovered? Paul does this by taking entomopathogenic Fungi (fungi that destroys insects) and morphs it so it does not produce spores. This patent has potential to revolutionize the way humans grow crops – if it can be allowed to reach mass exposure. To tolerate the use of pesticides in modern agriculture is to deny evidence proving its detrimental effects against the environment. [mashshare]

How To Recharge (Single Use) Alkaline Batteries I knew this was kind of possible; as a kid we used to leave dead alkaline batteries out in the sunshine for a few hours, and this seemed to recharge them a little bit, so we could get a bit more use out of them… What I didn’t realize is that you can actually purchase specific battery chargers which are designed to recharge dead single use alkaline batteries. Now maybe everyone else knew this, but I certainly didn’t! This means that once you have purchased a battery charger, such as the: Maximal Alkaline, RAM, Ni-MH, Ni-CD, AA, AAA, C, D, N, 9V BatteriesPower FC999 Universal Rapid Charger, you then effectively have free batteries for life. Our local authority recycles dead batteries, they pick them up with the garbage once a month. If I went out into the neighborhood that day, I could literally collect 1000s of free alkaline batteries which could then be recharged and reused. (Photo from: EvelynGiggles)