Make a Game - Make your own Games Online for Free 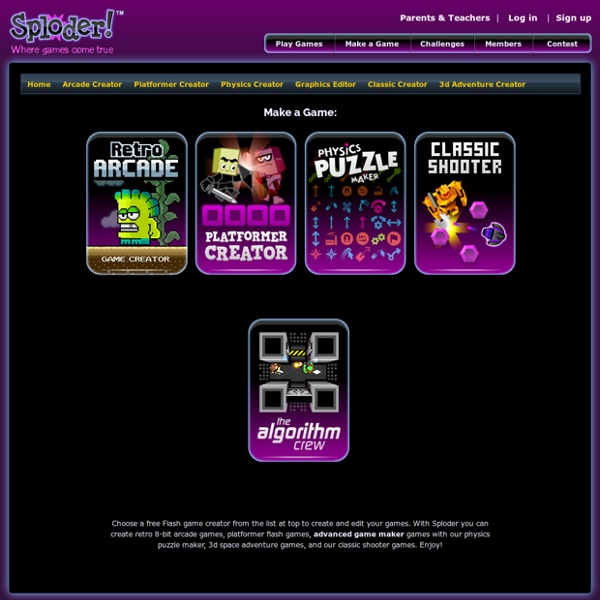 ScratchX What is ScratchX? ScratchX is a platform that enables people to test experimental functionality built by developers for the visual programming language Scratch. What's the difference between Scratch and ScratchX? Room Escape Maker - Create Escape The Room Games For Free Basic information ROOM ESCAPE MAKER is a free online application to create Escape The Room games. Build challenging casual point and click games with puzzles, hidden objects, safes with combination locks, and much more. YOU are game designer. And for free :-)

Chris Albeluhn - UT3 / UDK Physics Tutorial Number 1 This tutorial will go through a simple setup for a physics asset which can be done in both UT3 and UDK. This particular one will be an old medieval street light dangling from a rope which is attached to a wooden support. This will focus only on the rigging and physics construction side of the asset. First we need a model. Edu Lesson Plans Lesson plans to get you started Coding Download PDF How to Use Game Mechanics to Reward Your Customers There's a green card. Then there's silver, gold, and platinum. And then there's the Centurion—the black American Express card. Which do you want in your wallet?

Resources « Stevie's corner Welcome to my UT3 resources page :D This section consist of links to help a mapper start to build a level. Also, there are links to help you optimize your level, others that provide very useful information & others that are related to a specific topic. Something I want to point out is Odedge site.

Make a Robot ABCya is the leader in free educational computer games and mobile apps for kids. The innovation of a grade school teacher, ABCya is an award-winning destination for elementary students that offers hundreds of fun, engaging learning activities. Millions of kids, parents, and teachers visit ABCya.com each month, playing over 1 billion games last year. Apple, The New York Times, USA Today, Parents Magazine and Scholastic, to name just a few, have featured ABCya’s popular educational games. ABCya’s award-winning Preschool computer games and apps are conceived and realized under the direction of a certified technology education teacher, and have been trusted by parents and teachers for ten years.

How to Use Gamification to Reward Customers and Engage Prospects Everyone wants new business. But sometimes we get so wrapped up in trying to predict what the next great lead-gen tactic will be, we forget that new business doesn't come just from new customers. It also comes from your current customers, and it's a lot cheaper to acquire, to boot.

Tutorials Unreal Engine 4 Unreal Engine 4 tips: A couple of random all purpose UE4 tips. Performance tips most notably. soyrobot17- Symbaloo Gallery Related keywords: MiBlog , Mestre@casa , European , Robotics , Week , 2015 , BLOG , EU , ROBOTICS , Week , 2015 , MI Why the Gamification of Learning Became so Successful Who could have predicted that the gamification of learning could have yielded such continued success, for students of all ages? If twenty or so years ago you were to tell an educator that the future of learning exists in digital gaming, you’d probably be laughed at. Not too long ago games were viewed almost universally as a deterrent to education—the word “videogame” had nothing but the most negative connotation to many parents and educators.

Adding Characters To UDK tutorial - Unreal Development Kit Game Engine i.e. Enemies and Players dont have the same model, a intermediate tutorial with a video to acompany it as per a request (video does not have a commentary cus i dont have a mic and i cant be arsed to go to the shops and buy one) To fulfill a request for a written version of this, here is a written version of this :P First Of All: I used Uncodex and Notepad ++, if you use a different piece of software thats fine as long as you know how to do the same things that i do.