Create your own Interactive Fiction 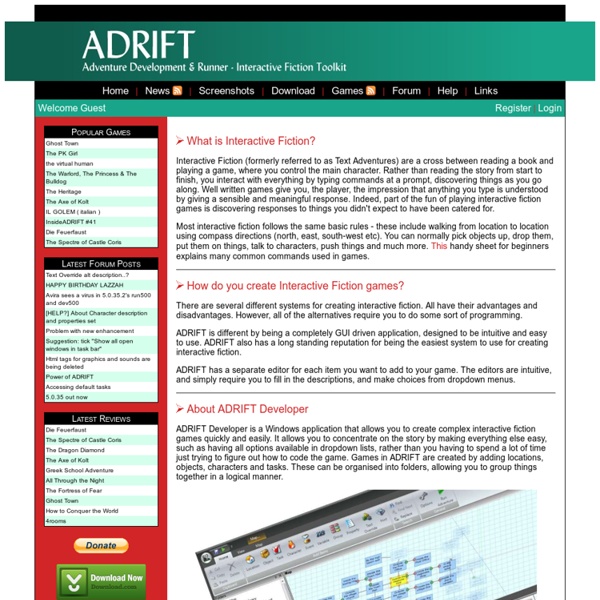 What is Interactive Fiction? Interactive Fiction (formerly referred to as Text Adventures) are a cross between reading a book and playing a game, where you control the main character. Rather than reading the story from start to finish, you interact with everything by typing commands at a prompt, discovering things as you go along. Well written games give you, the player, the impression that anything you type is understood by giving a sensible and meaningful response. Indeed, part of the fun of playing interactive fiction games is discovering responses to things you didn't expect to have been catered for. Most interactive fiction follows the same basic rules - these include walking from location to location using compass directions (north, east, south-west etc). How do you create Interactive Fiction games? There are several different systems for creating interactive fiction. ADRIFT is different by being a completely GUI driven application, designed to be intuitive and easy to use.

Quest - Write text adventure games and interactive stories Quest lets you make interactive story games. Text adventure games like Zork and The Hitchhiker's Guide to the Galaxy. Gamebooks like the Choose Your Own Adventure and Fighting Fantasy books. You don't need to know how to program. 50 of the Best Websites for Writers There are tons of reference sites on the web that can help you find a job or write a poem, essay or story. Here is a list of the best 50 websites for writers. Reference Websites Merriam-Webster Online - Merriam Webster is the perfect place to look up words and find information.

Digital Play In the University of Bristol’s Education Endowment Foundation‘s recent study on Neuroscience and Education, (Howard-Jones, 2014), there is an interesting section on Learning Games. Classroom practice and neuroscientific research The review ”considers the extent to which insights from the sciences of mind and brain influence, or are close to influencing classroom practice”, summarising “existing evidence about approaches and interventions that are based, or claim to be based, on neuroscience evidence.” The report categorises the approaches into 1) those which are likely to have a positive impact on attainment, 2) those which need further testing to determine the likely impact on attainment, and 3) those which do not seem to have a promising impact on attainment. Further research required

Room Escape Maker - Create Escape The Room Games For Free Basic information ROOM ESCAPE MAKER is a free online application to create Escape The Room games. Build challenging casual point and click games with puzzles, hidden objects, safes with combination locks, and much more. YOU are game designer. And for free :-) The community 10 of My Favorite Writing Craft Sites The writing journey is all about discovering what works best of for each of us as individual, and very unique, writers. Learning from others is valuable in helping us glean tips and fit together the puzzle pieces that will form our own writing processes. Today, I’d like to share with you ten of the sites that inspire, educate, and help me refine my process—plus, they’re run by a bunch of super awesome folks! 1.

Submrge Garry’s Mod A physics-based “sandbox” in which users can do almost anything, with a wide selection of assets (3D models, sounds, actions). Read More Spaceteam Allows multiple players using the same wifi to control a spaceship by executing various technical commands. Players manipulate the controls in order to complete the level and move on to the next. How to Plan Instruction Using the Video Game Model Imagine you are placed in the following scenarios: You are dropped off at the top of a ski resort's steepest run when you've only had experience on the beginner slopes. You have to spend your day on the bunny hill when you're an expert skier. You play a game of darts with the target two feet away. You play a game of darts with the target 200 feet away. You are a 3rd grade student trying to do a crossword puzzle designed for experts.

English words with disputed usage Also found in: Dictionary, Thesaurus, Legal. List of English words with disputed usage Some English words are often used in ways that are contentious between writers on usage and prescriptive commentators. MindShift's Guide to Game-Based Learning MindShift Guide to Digital Games and Learning How can games unlock a rich world of learning? This is the big question at the heart of the growing games and learning movement that’s gaining momentum in education.

Alice.org Alice is an innovative 3D programming environment that makes it easy to create an animation for telling a story, playing an interactive game, or a video to share on the web. Alice is a freely available teaching tool designed to be a student's first exposure to object-oriented programming. It allows students to learn fundamental programming concepts in the context of creating animated movies and simple video games. In Alice, 3-D objects (e.g., people, animals, and vehicles) populate a virtual world and students create a program to animate the objects.