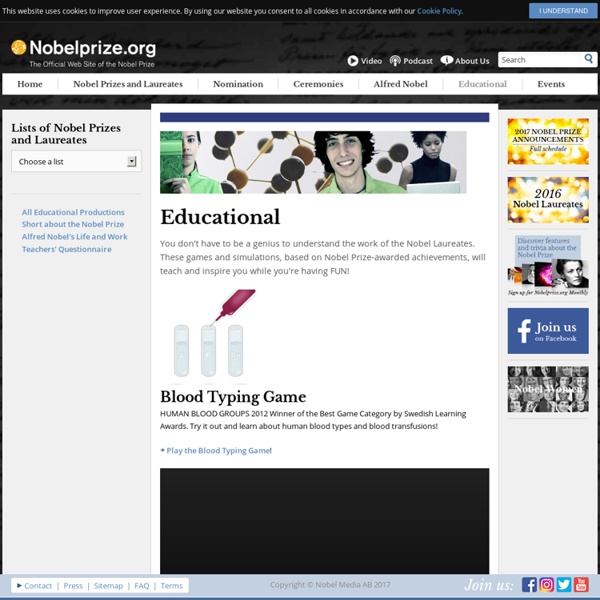 You don't have to be a genius to understand the work of the Nobel Laureates. These games and simulations, based on Nobel Prize-awarded achievements, will teach and inspire you while you're having FUN! To cite this pageMLA style: "Educational Games". Nobelprize.org. Nobel Media AB 2014. Web. 31 Aug 2015

A Tale in the Desert VI - Life in Egypt As I fly over Egypt--The (Long) Story of One Egyptian I sat in my compound, by the Nile. The stars were raising in the sky, a soft wind blowing, all in silence. The camels and sheep fed, the bunnies and chicken taken care of. All the daily chores done and it was time to have some rest and relaxation. Picture This : Giant Friends Puzzle Last year my son's nursery school teacher made an amazing giant puzzle using a class picture. She presented it to the kids on the 100th day of school and the kids all worked together to put it together. Needless to say it was a huge hit. With the simple instructions below, you can make your own personalized giant puzzle. Give it as a homemade birthday gift or simply use it as a rainy day surprise for your kids. Serious Games for Social Change by BreakAway, Ltd - Award-Winning Developer of Numerous Real-Time Strategy Games and Technologically Advanced Desktop Development Software Your goal is to orchestrate a nonviolent resistance campaign from the ground up against dictators, occupiers, authoritarians and oppressive rule. You are supported by the principles and experiences of some of the world's leading nonviolent activists such as, Gandhi, Dr. Martin Luther King, Jr. and Ivan Marovic, subject matter expert on A Force More Powerful, and member of Otpor, the Serbian resistance movement that played a critical role in ousting Slobodan Milosevich.

Ten Recent Advances in Evolution By Carl Zimmer Posted 10.26.09 NOVA To celebrate the 150th anniversary of the Origin of Species, here's a list—by no means exhaustive—of some of the biggest advances in evolutionary biology over the past decade. These advances include not just a better understanding of how this or that group of species first evolved, but insights into the evolutionary process itself. Guess-the-Google UPDATE: Guess-the-google is temporarily offline for maintenance. Hopefully back online soon. About the game Guess-the-google is an addictive guessing game based on Google's image search. It turns the mental activity of searching into a fun, visual and engaging game where people can enjoy the challenge of being the fastest and most efficient at making that connection between search terms and their results.

this site helps you to learn about how thecells in your body works. It also has a few other interesting games. by benjaminboulton2019 Dec 12