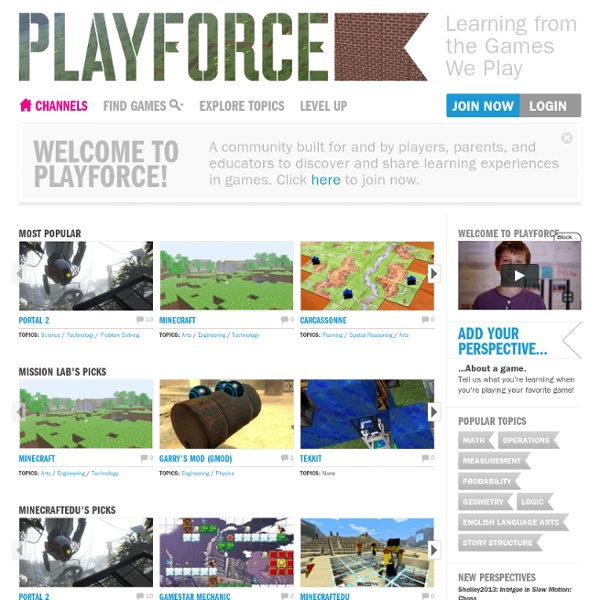 Playforce A searchable database of games with learning potential, Playforce allows users to explore games related to specific learning content, academic standards or twenty-first century skills, like empathy, systems thinking or collaboration. Playforce provides an indispensable resource to educators and parents looking to use games in service of specific learning goals. Game perspectives on Playforce are player-generated and moderated by a user community. Which means they don’t focus on what experts think is good about game play, but rather on what players know, based on their own collective experience. In addition, Playforce trains players to develop the critical tools to articulate the learning that occurs in the games they love to play, using a language which professionals and other adults can understand… a language which connects to traditional academic standards and twenty-first-century skills. Developed in partnership with E-Line Media, Playforce is now in beta.

Games For Learning Institute Ralph Metzner's Blog Gaming the Past | historical simulation games in the classroom H. G. Wells Herbert George "H. G." Wells (21 September 1866 – 13 August 1946)[3] was an English writer, now best known for his work in the science fiction genre. Wells's earliest specialised training was in biology, and his thinking on ethical matters took place in a specifically and fundamentally Darwinian context.[5] He was also from an early date an outspoken socialist, often (but not always, as at the beginning of the First World War) sympathising with pacifist views. Early life[edit] A defining incident of young Wells's life was an accident in 1874 that left him bedridden with a broken leg.[3] To pass the time he started reading books from the local library, brought to him by his father. No longer able to support themselves financially, the family instead sought to place their sons as apprentices in various occupations. Teacher[edit] H. H. He soon entered the Debating Society of the school. During 1888 H. Upon leaving the Normal School of Science, Wells was left without a source of income.

Serious Games Directory BETA | Iran: A Crime on YouTube, an Execution in Public Two young men, Alireza Mafiha and Mohammad Ali Sarvari, were executed by hanging in Tehran, Iran in the early hours of January 20, 2013 before the eyes of public spectators [warning: graphic photos] who had gathered to watch, according to the Islamic Republic News Agency (IRNA). Crime and YouTube The hunt for the alleged muggers was given top priority after security camera footage was posted on YouTube towards the end of 2012 showing four youths on two motorbikes who ambushed a pedestrian, threatening him with a knife and taking his belongings. Four men were soon arrested and tried. Over a fistful of dollars Amirhadi from Tehran writes about this photo in his blog [fa]: Look at this photo, it is as if the accused has laid his head on the shoulder of the very agent who is to carry out the [death] sentence. Kill us. Spectator sport Reacting to the news, Dara writes in his blog called [fa] ‘Words from the depth of my heart‘:

Solving the World - Serious Games Require Serious Gamers | Curiouser Institute Every day gamers go into fictional spaces to save the world. They go on quests to save the Mario Galaxy, battle evil in Azeroth, and improve their lots in Farmville. Millions of gamers spend in the area of 3 billion hours a week solving the difficult and challenging problems of hundreds of fictional worlds and thousands of quests. Until lately that didn't really have much of an effect on the real world. However with the rise of Serious Gaming, a movement that explores the uses of games beyond "entertainment", video games and the real world have become entwined. The ability of games to now reach out into the real world brings up a tantalizing question. Like puzzles? The term "serious gaming" is a useful, but in some ways unfortunate term. Current games are packed with psychologically rich content which is highly reflective and connected to our inner life. This is what makes the games so vitally important to us. The players' intention is the key.

Forties Slang (40s) » The 1940's • 1940-1949 • Fashion History Movies Music A list of slang words and phrases that were used during the 1940s, and their meanings. This is just icing on the cake when you consider what the decade already gave us in the form of patriotism, music, fashion, and movies. Now, a language! In no particular order: Take a powder – to leave Fuddy-Duddy – old-fashioned person Gobbledygook – double talk, long speech Fat-head – stupid or foolish person Chrome-dome – word for a bald headed man Eager beaver – enthusiastic helper Armored heifer – canned milk In cahoots with – conspiring with Snap your cap – get angry Active duty – sexually promiscuous boy Share crop – sexually promiscuous girl Doll dizzy – girl crazy Ducky shincracker - a good dancer Above my pay grade – don’t ask me Cook with gas – to do something right Killer-diller – good stuff Hi sugar, are you rationed? Stompers – shoes Flip your wig – to lose control of yourself Dead hoofer – poor dancer Bathtub – motorcycle sidecar Pennies from heaven – easy money Ameche – to telephone Lettuce - money

Game Theory, Popular Science On test day for my Behavioral Ecology class at UCLA, I walked into the classroom bearing an impossibly difficult exam. Rather than being neatly arranged in alternate rows with pen or pencil in hand, my students sat in one tight group, with notes and books and laptops open and available. They were poised to share each other's thoughts and to copy the best answers. As I distributed the tests, the students began to talk and write. All of this would normally be called cheating. Who in their right mind would condone and encourage cheating among UCLA juniors and seniors? The students began to talk and write. Nevertheless, I'm a realist. Much of evolution and natural selection can be summarized in three short words: "Life is games." So last quarter I had an intriguing thought while preparing my Game Theory lectures. A week before the test, I told my class that the Game Theory exam would be insanely hard—far harder than any that had established my rep as a hard prof. Gasps filled the room.

The real-life Django: black Wild West marshal Bass Reeves who arrested 3,000 outlaws and killed 14 men Bass Reeves was born a slave in 1838 and later broke from his owner to live among Native AmericansReeves became a Deputy U.S. Marshal in 1875 at the age of 38During his 32-year career as a Deputy Marshal he arrested 3,000 felons, killed 14 men and was never shot By Daily Mail Reporter Published: 14:44 GMT, 19 January 2013 | Updated: 18:15 GMT, 19 January 2013 Bass Reeves, one of the first African Americans to become a Deputy U.S. Reeves, who was born a slave, arrested 3,000 felons, killed 14 men and was never shot throughout his 32-year career as a federal lawman. The fearless solider was born into slavery in 1838 in Crawford County, Arkansas, and eventually broke from his owner, George Reeves, to live among the Creek and Seminole Indians. Scroll down for video Real-life Django: Bass Reeves, born a slave, later became a Deputy U.S. Appointment: Reeves became a Deputy U.S. During his time with them, he learned their customs and languages and became an adept territorial scout.

Learning Analytic for Digital Game-Based Learning There is an overlooked opportunity in games – big data generated in the interactions through gaming. Game based learning is great, it’s learning-by-doing with lower costs in many cases, it’s focused on problem solving, it improves students motivation. But when we suggest teachers to use serious games to teach their students, the first question that it comes to their minds is: “Well, I like the idea, but… How do I assess this?”, or “How do I know it works for everyone?” Learning Analytics for Serious Games should step in now. Most of current research is focused on analyzing data generated by LMS, and they obtained interesting results analyzing visits and views of courses resources, forums interactions… However, serious games—and all videogames—are interactive by nature, and this interactivity generates a lot of data that can be analyzed. GALA has elaborated this concept in further details (refer to here : a “Call for submission” for GALA special issue on game-based learning):

Domestic Violence: Can your smartphone save your life? Erasing domestic violence with a swipe of the finger? There’s an app for that. From apps to combat cyberstalking and real life domestic abuse, to using existing popular Facebook features, hundreds of volunteer developers contributed their time and talent to create online solutions against domestic violence during a weekend hackathon spanning two continents. The leading cause of injury for women - more than car accidents, muggings and rapes combined - domestic violence claims more female victims than any of the main threats to women’s wellbeing in the world. Latin America -and Central America in particular - are no strangers to this issue. To further raise awareness of the challenge posed for the region, the first Domestic Violence hackathon took place across Central America and Washington DC January 26-27. Digital Solutions ‘In Guatemala, violence is a significant problem. A selection of the winning prototypes: A web app to combat cyber stalking, in Washington. What is the Bank doing?