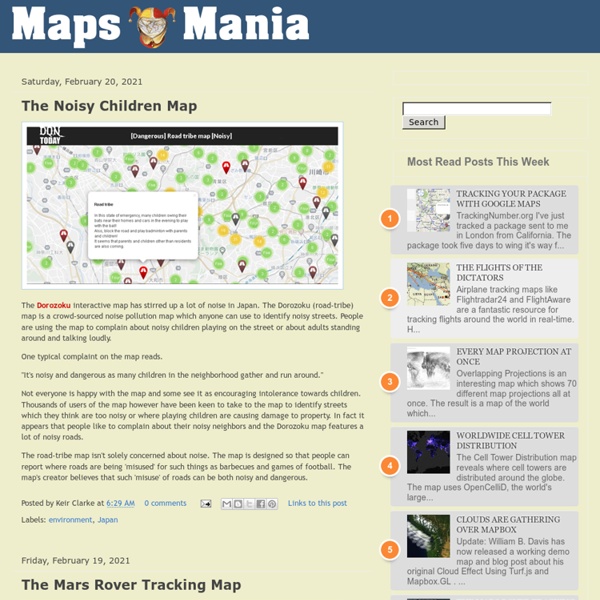 The Boston Globe has published an interesting photo that uses the Leaflet mapping platform to provide an interactive graphic of survivors of the bombing of the Boston Marathon. One year after the tragic bomb explosion at the Boston Marathon, The Boston Globe invited survivors, police, firefighters, EMTs, doctors, nurses and runners back to the finish line on Boylston Street to pose for a group photo. The resulting One Year, One City photo is a powerful testimony to the resilience of the people of Boston. By using the Leaflet mapping platform the Boston Globe has created an interactive photo which you can pan around and in which you can zoom in on individuals in the picture. You can even click on the people in the photo to learn a little more about their experience during last year's tragic events. NECN.com has also used the Leaflet platform to create a story map of the Boston Marathon.

Periodis Web - Maps to be Used for the History of Europe Euratlas Periodis Web shows the history of Europe through a sequence of 21 historical maps, every map depicting the political situation at the end of each century. Here, on the left, are 21 mini-maps giving access to 21 full maps and to 84 quarters of maps with more detailed views of the states, provinces and main cities.Moreover, each map offers a historical gazetteer. Thus you can highlight in red each sovereign state and in green each dependent entity.

Tool for Google Maps v3 (version 3) This application is also available with Large map. This is a drawing tool for polyline, polygon, polygon with holes, rectangle, circle, marker(icon), direction(route, path). This application uses the Google Maps API Version 3 (V3). 40 maps that explain the world 2013 Maps can be a remarkably powerful tool for understanding the world and how it works, but they show only what you ask them to. So when we saw a post sweeping the Web titled "40 maps they didn't teach you in school," one of which happens to be a WorldViews original, I thought we might be able to contribute our own collection. Some of these are pretty nerdy, but I think they're no less fascinating and easily understandable.

Infographics - Own your Information I am a Visual Arts teacher, just so you might start to understand my next comment. I love good Infographics ! I can not think of another technique that condenses the essence of a message down into a more accessible and easily understood medium. I love the way that;

Education Available languages — Using OpenStreetMap in an Educational Context For information about academic research related to OpenStreetMap, see Research. For a general article about how to map educational facilities in OpenStreetMap, see Education features. Students learning about OpenStreetMap at a workshop at FEATI University in the Philippines OpenStreetMap is being used in schools, universities and colleges in a wide range of disciplines. Maps JavaScript API v3 The Maps JavaScript API lets you customize maps with your own content and imagery for display on web pages and mobile devices. The Maps JavaScript API features four basic map types (roadmap, satellite, hybrid, and terrain) which you can modify using layers and styles, controls and events, and various services and libraries. Audience This documentation is designed for people familiar with JavaScript programming and object-oriented programming concepts. You should also be familiar with Google Maps from a user's point of view.

40 more maps that explain the world 2014 Maps seemed to be everywhere in 2013, a trend I like to think we encouraged along with August's 40 maps that explain the world. Maps can be a remarkably powerful tool for understanding the world and how it works, but they show only what you ask them to. You might consider this, then, a collection of maps meant to inspire your inner map nerd. I've searched far and wide for maps that can reveal and surprise and inform in ways that the daily headlines might not, with a careful eye for sourcing and detail. I've included a link for more information on just about every one. Enjoy.

Google Maps Launch Google MapsLaunch Maps in LUNA Browser The over 120 historical maps in the Google Maps have been selected by David Rumsey from his collection of more than 150,000 historical maps; in addition, there are a few maps from collections with which he collaborates. These maps can also be seen in the Gallery layer of Google Earth, Rumsey Historical Maps layer, and in the Google Earth viewers on this website. All the maps contain rich information about the past and represent a sampling of time periods (1680 to 1930), scales, and cartographic art, resulting in visual history stories that only old maps can tell. Each map has been georeferenced, thus creating unique digital map images that allow the old maps to appear in their correct places on the modern globe. The original historical maps are first made into digital images by scanning them with high resolution digital cameras.

Online KML converter – batch geocoder Our free online converters let you batch geocode ZIP codes and UK postcodes, and we also offer a range of individual converters. We developed the technologies behind these converters for our own products and decided to share them for others to use freely. Converter limits The Batch Converter is limited to 50,000 rows, and the KML converter approximately 32Mb. Batch Geocoder & Converter 100 Diagrams That Changed the World Since the dawn of recorded history, we’ve been using visual depictions to map the Earth, order the heavens, make sense of time, dissect the human body, organize the natural world, perform music, and even concretize abstract concepts like consciousness and love. 100 Diagrams That Changed the World (public library) by investigative journalist and documentarian Scott Christianson chronicles the history of our evolving understanding of the world through humanity’s most groundbreaking sketches, illustrations, and drawings, ranging from cave paintings to The Rosetta Stone to Moses Harris’s color wheel to Tim Berners-Lee’s flowchart for a “mesh” information management system, the original blueprint for the world wide web. It appears that no great diagram is solely authored by its creator. Most of those described here were the culmination of centuries of accumulated knowledge.

Global Terrorism Database The updated GTD WebGL Globe is an interactive geographic visualization, currently in beta, that plots the location and frequency of yearly terrorist attacks worldwide from 1970-2014. It was developed by START using the WebGL Globe open platform created by the Google Data Arts Team. Automated geocoding from the OpenCage Geocoder supplements the geocoding available in the public dataset. Periscopic, a data visualization firm that promotes information transparency and public awareness, has produced an innovative, interactive tool that allows users to explore the impact and dynamics of GTD perpetrator groups. A World of Terror examines the 25 perpetrators that were most active between 1970 and 2013, visualizing their attack patterns across multiple dimensions including life span, recency, casualties, and geographic spread. The GTD Data Rivers 2.0 application is an interactive visualization tool that allows users to explore patterns of terrorism in the Global Terrorism Database (GTD).

The Maps of Heinrich Kiepert The Maps of Heinrich Kiepert Geographer Heinrich Kiepert (1818-1899) is generally reckoned one of the more important scholarly cartographers of the second half of the 19th century. This Web page provides access to some Kiepert maps held at the University of Chicago Library's Map Collection. Kiepert acquired one of his interests—the historical geography of the classical world—in his student days at the University of Berlin, where he worked with Carl Ritter (1779-1859). Ritter and Kiepert produced what appears to have been one of the first modern atlases of the ancient Greek world, Topographisch-historischer Atlas von Hellas und den hellenischen Colonien in 24 Blättern (1840-1846).

ArcGIS Blog The Evolve conference hosted by Xamarin, is a premier cross-platform mobile event where 1,500 developers, industry leaders and Xamarin experts converge to define the future of apps. This year Esri is a silver sponsor for the event and will be participating in activities at Evolve16 in Orlando, Florida, April 24-28. Esri will be showcasing opportunities for Xamarin developers, including leveraging ArcGIS technology that integrates seamlessly with the Xamarin platform. Rex Hansen, ArcGIS Runtime product manager, and Rich Zwaap, lead software developer for the ArcGIS Runtime SDK for Xamarin, will be giving a technical presentation on “Building Cross-Platform Mapping Apps with ArcGIS Runtime” for developers who need to build mapping apps for iOS, Android, and Windows.