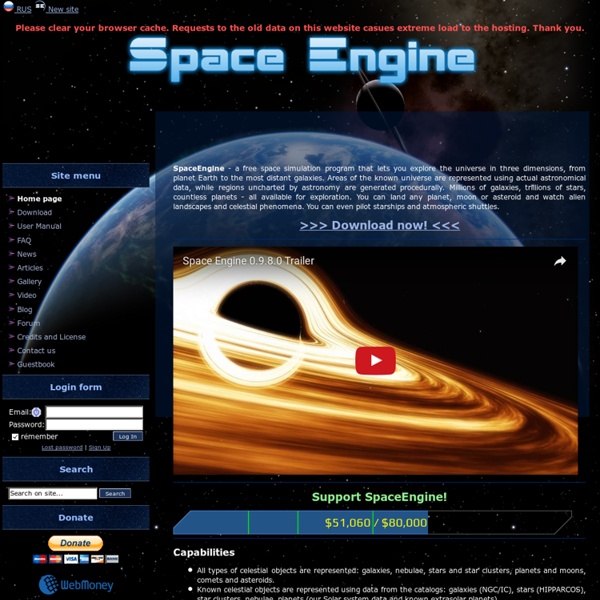 SpaceEngine - a free space simulation program that lets you explore the universe in three dimensions, from planet Earth to the most distant galaxies. Areas of the known universe are represented using actual astronomical data, while regions uncharted by astronomy are generated procedurally. Millions of galaxies, trillions of stars, countless planets - all available for exploration. You can land any planet, moon or asteroid and watch alien landscapes and celestial phenomena. You can even pilot starships and atmospheric shuttles. >>> Download now!

Moon Madness! I can't think of anything more fun to teach than space. The moon is one topic that I totally love teaching about! There's just so much great information out there. Nothing gets kids REALLY excited like learning about the moon! I have included some great videos, games and goodies (including a freebie) for you to use in your classroom as you study all about the moon! WorldWide Telescope - Microsoft Research Q. What is WorldWide Telescope? A. The WorldWide Telescope is a rich visualization environment that functions as a virtual telescope, bringing together imagery from the best ground- and space-based telescopes to enable seamless, guided explorations of the universe.

The Incredible Shrinking Mercury is Active After All The planet Mercury is being pelted regularly by bits of dust from an ancient comet, a new study has concluded. This has a discernible effect in the planet’s tenuous atmosphere and may lead to a new paradigm on how these airless bodies maintain their ethereal envelopes. The findings are to be presented at the annual Meeting of the Division of Planetary Sciences of the American Astronomical Society at National Harbor, Maryland, this week, by Apostolos Christou at the Armagh Observatory in Northern Ireland, Rosemary Killen at NASA’s Goddard Space Flight Center in Greenbelt, Maryland, and Matthew Burger of Morgan State University in Baltimore, working at Goddard. Mercury appears to undergo a recurring meteoroid shower when its orbit crosses the debris trail left by comet Encke. (Artist's concept.) Credits: NASA/Goddard

Space Below, you will find a wide range of ideas and resources to help you when you are teaching children about Space. If you have any relevant resources to share, please email them and I will add them to this page. Thank you! NASA Posts a Huge Library of Space Sounds, And You're Free To Use Them Space is the place. Again. And SoundCloud is now a place you can find sounds from the US government space agency, NASA. In addition to the requisite vocal clips (“Houston, we’ve had a problem” and “The Eagle has landed”), you get a lot more. There are rocket sounds, the chirps of satellites and equipment, lightning on Jupiter, interstellar plasma and radio emissions. And in one nod to humanity, and not just American humanity, there’s the Soviet satellite Sputnik (among many projects that are international in nature).

Rosetta comet probe given termination date Image copyright ESA The Rosetta probe will be crash-landed on Comet 67P on Friday 30 September, the European Space Agency has confirmed. The manoeuvre, which is expected to destroy the satellite, will bring to an end two years of investigations at the 4km-wide icy dirt-ball. Flight controllers plan to have the cameras taking and relaying pictures during the final descent. Sensors that "sniff" the chemical environment will also be switched on.

MARS Rover Virtual Reality Panoramic images - 360 degree QTVR Photos from panoramas.dk A Great Place to Watch the Weather - Dust devils The martian wind sends hundreds of dust devils spinning across the surface of the planet. From Spirit's high perch approximately 90 meters (295 feet) above the surrounding plains, as shown in this image taken from the summit of "Husband Hill," three dust devils are clearly visible in the plains of Gusev Crater. NASA Kids Club Skip to main content NASA Kids Club › Text Only Site Ready For A Challenge? Join Now!