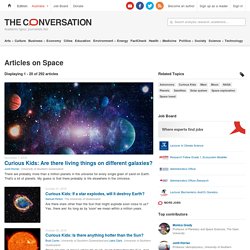 That's a lot of planets. My guess is that there probably is life elsewhere in the Universe. Are there stars other than the Sun that might explode soon close to us? Yes, there are! As long as by 'soon' we mean within a million years. There are lots of places where it's much, much hotter than the Sun. These school holidays, check out the podcast Imagine This, a co-production between ABC KIDS listen and The Conversation.

Our brain cells do look a lot like a map of the universe – but that doesn't mean they're the same thing. The career arc of Nichelle Nichols – the first black woman to have a continuing co-starring role on TV – shows how diverse casting can have as much of an impact off the screen as it does on it. "Sometimes I've believed as many as six impossible things before breakfast. " Anish Kapoor made “Cloud Gate”, a giant bean-shaped mirror in Chicago. We are in the Milky Way. Earth & Space. Cross-curricular science ideas web: Space- Learn Chemistry. Biography. Why Don't Satellites Fall Out of the Sky? Planet and Astronomy Facts for Students.

Ask a NASA Scientist: If You Have a Question about Space, ask to receive an answer; a collection of past questions and answers Astronomy for Kids: Facts about the Solar System, Sun, Meteorites, Stars, Galaxies, Planets, Moon, Comets, Asteroids, and a Dictionary; written for kids SkyMarvels.com: Brings you "real astronomy" in stunning 3-D with a treasury of tools, information, animations, experiences, inspiration, "and FUN"! 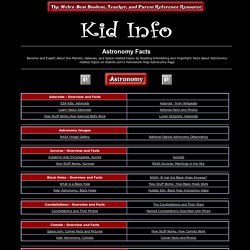 Cosmos4Kids.com: Facts and Information about the universe, galaxies, stars, solar system, and space exploration Enchanted Learning: All About Space: Links to information about astronomy, the planets, and MORE! Kids' Astronomy.com: This site takes you to the moons of Jupiter; explore the possibility of life on these distant worlds. Nanogirl Dr Michelle Dickinson onboard NASA SOFIA flight. Space Engine - Home page. 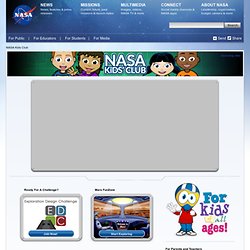 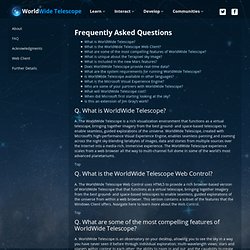 What is WorldWide Telescope? A. The WorldWide Telescope is a rich visualization environment that functions as a virtual telescope, bringing together imagery from the best ground- and space-based telescopes to enable seamless, guided explorations of the universe. WorldWide Telescope, created with Microsoft’s high-performance Visual Experience Engine, enables seamless panning and zooming across the night sky blending terabytes of images, data and stories from multiple sources over the Internet into a media-rich, immersive experience. 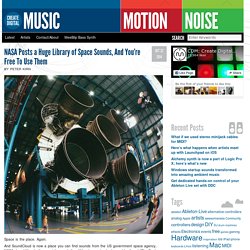 Again. And SoundCloud is now a place you can find sounds from the US government space agency, NASA. In addition to the requisite vocal clips (“Houston, we’ve had a problem” and “The Eagle has landed”), you get a lot more. There are rocket sounds, the chirps of satellites and equipment, lightning on Jupiter, interstellar plasma and radio emissions. And in one nod to humanity, and not just American humanity, there’s the Soviet satellite Sputnik (among many projects that are international in nature). Many of these sounds were available before; I’ve actually used a number of them in my own music. Another thing: you’re free to use all of these sounds as you wish, because NASA’s own audio isn’t copyrighted. Let the space remixing begin. Spacekids - space toys, dressing up costumes, kids spacesuits, astronaut food, cool space stuff!