What Happened At The National Demo for #FreeEducation? @CraigMcVegas. Statement from the National President @ NUS connect. Thursday 06-11-2014 - 17:02 Dear all As many of you will know, a demonstration for free education has been organised, taking place in London on 19 November. 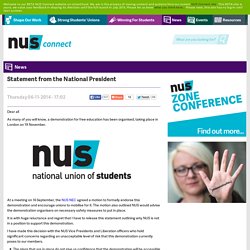 At a meeting on 16 September, the NUS NEC agreed a motion to formally endorse this demonstration and encourage unions to mobilise for it. The motion also outlined NUS would advise the demonstration organisers on necessary safety measures to put in place. It is with huge reluctance and regret that I have to release this statement outlining why NUS is not in a position to support this demonstration. I have made this decision with the NUS Vice Presidents and Liberation officers who hold significant concerns regarding an unacceptable level of risk that this demonstration currently poses to our members. Toni Pearce (@toni_pearce) NUS withdraws support for national student demo over safety concerns. Student activists have criticised the National Union of Students (NUS) after it withdrew support for what is expected to be one of the biggest student demos in years, over safety concerns. 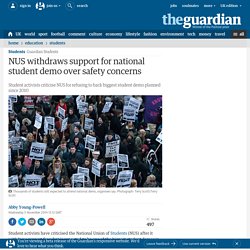 The national protest, organised for 19 November by the Student Assembly Against Austerity and the National Campaign Against Fees and Cuts, will see students march through central London towards Westminster to call for politicians to scrap tuition fees. Thousands of students from around the country are expected to attend the rally, which would make it the biggest student demo of its kind since 2010. Toni Pearce, president of NUS, says in a statement that the march poses an “unacceptable level of risk to our members”. NUS Withdraws support for tuition fees demonstration. NUS pulls support for ‘free education’ march. The National Union of Students has pulled its backing from this month’s “free education” demonstration Toni Pearce, the NUS president, says today in a statement that with “huge reluctance and regret” she is “outlining why NUS is not in a position to support this demonstration”. 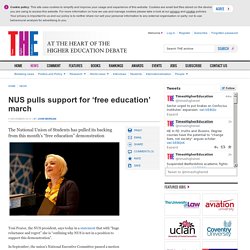 Gordon Maloney on Twitter: "I think @nusuk withdrawing support for the demo makes students more, not less vulnerable. @nusScotland is still backing it. #nuszc14" Students against boredom and banality. The student movement cut from the shards of Millbank has departed to a world of unaffordable debt and unattainable jobs - but has the dream departed with it? 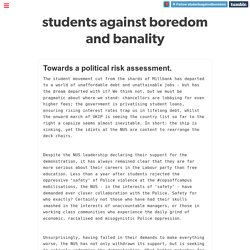 We think not, but we must be pragmatic about where we stand: chancellors are lobbying for even higher fees; the government is privatising student loans, ensuring rising interest rates trap us in lifelong debt, whilst the onward march of UKIP is seeing the country list so far to the right a capsize seems almost inevitable. Student Assembly Against Austerity - Free Ed Demo Live Blog.

Caroline Lucas MP at free education protest. Students are right to march against the markets. Why can’t education be free? There is a certain type of joy only felt the first time one makes history, and you can’t really describe to anyone who hasn’t experienced it. 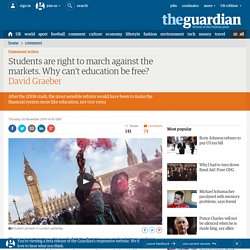 Yesterday about 10,000 young people from across the country discovered what it’s like. 19 November 2014, the date of the Free Education march, will surely be remembered as the start of a new student movement. Without the support of any major party or institution, abandoned even by their own National Union of Students, organisers nonetheless managed to mobilise thousands, including teenage college students and schoolchildren, supported by a smattering of veterans from the mobilisations of 2010. Still, unlike the occupiers in 2010, this was not a defensive action, not a call to halt the cuts; students were calling for a complete reversal of the entire direction of higher education policy – and by extension, the direction this society as a whole has taken – for the last 30 years. UK: Protesters attack STARBUCKS during London demo. Free Education Protest (Major Events) Students and Police Clash During UK Tuition Hike Protests. Indian Police Storm Cult Leader Rampal's Compound A self-styled Indian religious leader was charged on Thursday with sedition and waging war against the state after a days-long siege of his sprawling compound ended in his arrest along with 450 hardcore followers. 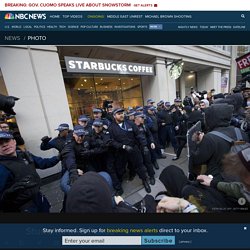 Police evacuated more than 10,000 followers on Wednesday from the fortified compound of a bizarre cult headed by 'godman' Satguru Rampalji Maharaj before capturing him late in the evening. The 63-year-old former engineer, known to his followers as Rampal, had been wanted for ignoring more than 40 court summonses in connection with a murder case. "I am innocent," he told reporters as he was brought out, handcuffed, from a court in the northwestern city of Chandigarh. "All allegations against me are false. " Police used tear gas, water cannon and bulldozers to storm Rampal's 12-acre base, breaching resistance from a human chain of supporters outside, and men throwing stones and bottles filled with acid from its roof.

Adam In Chains sur Twitter : "@rustyrockets you owe me a pint, good sir! Carried it around all day at the front. #FreeEducation. UK: Police beat back students during London demo against uni fees. Round-up of yesterday’s coverage of the demonstration. Round-up of yesterday’s coverage of the demonstration — National Campaign Against Fees and Cuts. #FreeEducation March: UK police slam student protester to the ground. Danny sur Twitter : "Any excuse for a good ol' riot #FreeEducation...

SAAA Student Manifesto by Student Assembly Against Austerity. Abolishing tuition fees: lessons from Germany. Students must mobilise on the streets and build alliances to win free education, says Deborah Hermanns Source: Sang Tan/PA When I was growing up in Germany, the free education movement was happening all around me. 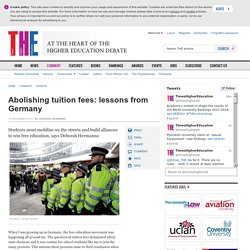 The question of tuition fees dominated whole state elections and it was routine for school students like me to join the many protests. This autumn these protests came to their conclusion when the last remaining state, Lower Saxony, abandoned tuition fees. During the same period, students in the UK mobilised on the streets in their tens of thousands – but here, the student movement has been repeatedly defeated, from the introduction of tuition fees in the late 1990s to 2012, when the cap on fees was tripled to £9,000.

The German student movement won in large part because it kept going and didn’t compromise. Since 2010, its only intervention into mobilising students was to call a demonstration in 2012 which marched to Kennington. Click to rate. Student Protests: Is Education A Right? - Russell Brand. NCAFC PT 1 students fight against fees&cuts. NCAFC PT 2 students fight against fees. Thousands of Students Ran Wild in the Streets of London Yesterday. Rocking up to Malet Street, outside what used to be the University of London Union, there was a palpable buzz in the air. 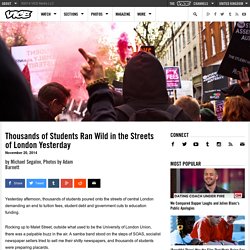 A samba band stood on the steps of SOAS, socialist newspaper sellers tried to sell me their shitty newspapers, and thousands of students were preparing placards. There were more people there than I expected, especially given that the National Union of Students (NUS) had pulled out of supporting the march due to the "unacceptable level of risk" that it posed Despite that, Gordon Maloney, President of NUS Scotland, was there, busy pointing out that the Scottish NUS is autonomous: "We don't have tuition fees in Scotland, but we know we've got a long way to keep fighting until we have an equitable education system," he told me. Maloney's presence was appreciated but it also seemed a little backwards. IMO: Why We Need To Scrap Tuition Fees (E005)

Student protest over tuition fees ends in scuffles with police.