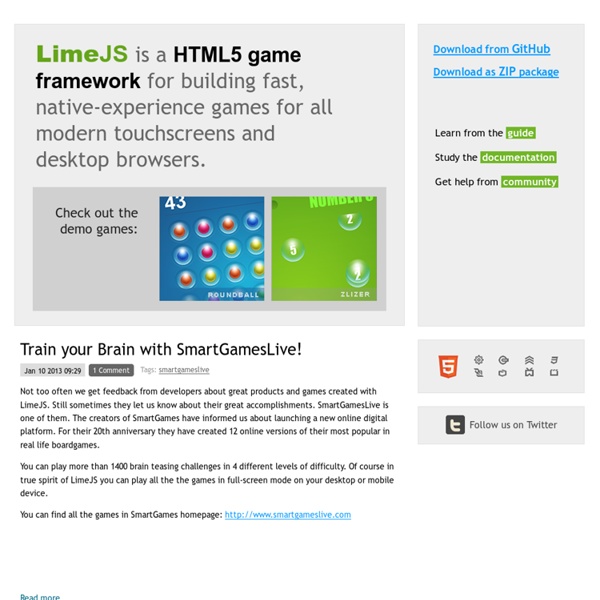 Jan 10 2013 09:29 Not too often we get feedback from developers about great products and games created with LimeJS. Still sometimes they let us know about their great accomplishments. SmartGamesLive is one of them. The creators of SmartGames have informed us about launching a new online digital platform. For their 20th anniversary they have created 12 online versions of their most popular in real life boardgames.

GlobalWeather: GetWeather Operation Session closed! Please try again. If you want to invoke Web Services using a comfortable form you can download Membrane SOAP Client and install it on your computer. The generic SOAP Client is an open source Eclipse RCP application. CopperLicht - Open Source JavaScript 3D Engine using WebGL Open Source WebGL 3D engine with editor CopperLicht is a commercial grade WebGL library and JavaScript 3D engine for creating games and 3D applications in the webbrowser. It uses the WebGL canvas supported by modern browsers and is able to render hardware accelerated 3d graphics without any plugins. Optimized, Fast, and Free CopperLicht originally was the WebGL rendering backend of the CopperCube editor, and was made free to be used by anyone. Thus, it comes with a full 3D editor and supports all features necessary to create full 3d games in the browser.

Collection of 10 Best Free jQuery Plugins of May 2014 There are many web developers and designers who are actively working on developing various free jQuery plugins every day. Every month lots of free and open source jQuery plugins gets released. For the month of may 2014, we have a list of 10 best jQuery plugins which can help you enhance and optimize your websites and other applications . 1. Phono Phono is a simple jQuery plugin and JavaScript library that turns any web browser into a phone; capable of making phone calls and sending instant messages. Go Daddy really and truly opposes SOPA now Go Daddy has decided to stop flirting with Congress' SOPA bill. There's nothing like getting kicked in the teeth by your customers to make a company see reason. When Internet registry and Web site hosting company Go Daddy first realized that supporting the Stop Online Piracy Act (SOPA), a misguided Internet copyright and censorship bill, wasn't a smart idea, Go Daddy CEO Warren Adelman did a half-assed job of backing away from SOPA. A few days later, and quite a few lost customers later, Go Daddy has decided to really and truly oppose SOPA.

deanm/pre3d @ GitHub Pre3d, a JavaScript 3d rendering engine Play with an application built using Pre3d, like GraphyCalc. See a demo like monster, colorscube, lorenz84, or gji. View technical samples like spin ring, textured cube, extruded sphere with normals, 3d cubic bezier spiral, or slink. Get the latest code from the git repository, as a zip file, or as a tarball.

Touch - JavaScript Mobile Framework for Building HTML5 Web Apps DHTMLX Touch is a free open source JavaScript library for building HTML5-based mobile web apps. It's not just a set of UI widgets, but a complete framework that allows you to create eye-catching, robust web applications that run on iOS, Android, and other mobile platforms. Syntax DHTMLX Touch framework offers intuitive object inheritance. You can define an object with properties, some of which are objects or arrays of objects, and some are simple strings or numbers. This way you can pass data into components or nest components one into another.

Our 30 Best Bootstrap Themes Bootstrap has brought us an unprecedented level of ease and speed for whipping up prototypes and even fully functional websites. We've got a ton of amazing Bootstrap themes on Creative Market, but here's a special selection of thirty of our favorites. Bootstrap Admin Themes How to sideload apps (even the Android Market) on the Amazon Kindle Fire The Amazon Kindle Fire may look like a tablet designed only to access apps, music, movies, books, and periodicals from Amazon. But under the hood it’s an Android tablet, which means that it can run most apps designed for Android 2.3 and earlier. And it turns out it’s quite easy to install most of them. Most users will probably be content with the Amazon Appstore, which offers about 20,000 apps and counting. But there are hundreds of thousands of apps for Android, and if you’re looking for an app that Amazon doesn’t offer, it may be easier than you think to install it. Update: While the steps below will show you how to get more out of your Kindle Fire while using the software that comes with the tablet, you can also now erase Amazon’s Android software and replace it with CyanogenMod 7.

JS3D: 3d Javascript Graphics Layer Click the cube to toggle animation Skip to: What is JS3D? JS3D is a library which allows you to have interactive 3d objects on your website, such as the spinning cube at the top of the page. The 3d effect is created using actual text, try selecting the text on the cube above!

Based on the mighty ljs-libary CLOSURE, developped by Google; capable of painting in canvas or DOM by avayaoli Jun 8