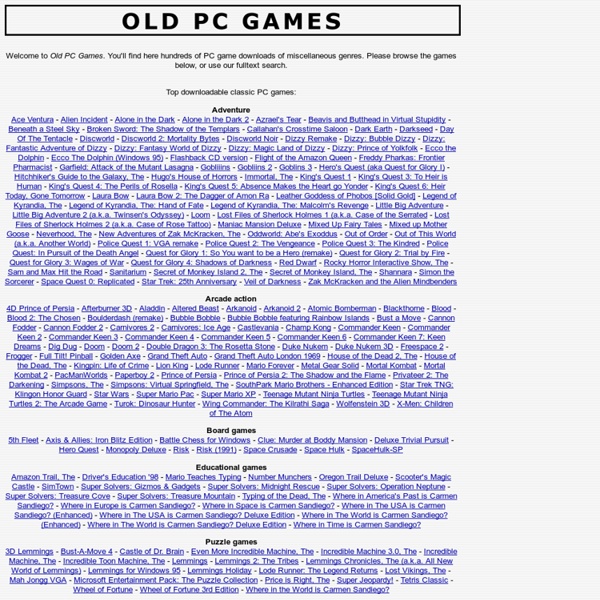 [Imagine Chat] Role Players Creed 1. I will maintain the illusion of the game by staying in character whenever possible. I will withhold out of character comments until absolutely necessary and even then I will whisper or ICQ them to the other players. Mindfuck Movies list Explore Lists Reviews Images Update feed Categories MoviesTV ShowsMusicBooksGamesDVDs/Blu-RayPeopleArt & DesignPlacesWeb TV & PodcastsToys & CollectiblesComic Book SeriesBeautyAnimals View more categories » Added by Earthloops on 2 Apr 2011 08:45 1483462 Views 50 Comments

30 Useful (and Unknown) Web Apps You Need to Bookmark - Page 1 At Maximum PC, computer hardware is our bread and butter. We review it, preview it, and just generally love to talk about it. Unfortunately, hardware becomes less important with each passing day, as more and more software moves onto the internet. We're not looking forward to the day that our PC's become Chrome OS-style thin client, but we have to admit, some web apps are pretty awesome. So to help you prepare for a future in the cloud, we've put together a list of 30 of our favorite web apps and services.

This War of Mine v1.2.2 Incl War Child Charity DLC Cracked-3DM Group 3DM has released the latest version of pc game “This War of Mine”. Enjoy! Description: In This War Of Mine you do not play as an elite soldier, rather a group of civilians trying to survive in a besieged city; struggling with lack of food, medicine and constant danger from snipers and hostile scavengers. The game provides an experience of war seen from an entirely new angle. This Year in Video Game Criticism: The Games That Shaped 2014 This week, our partnership with game criticism site Critical Distance brings us picks from Eric Swain from the entirety of 2014. From the year's biggest releases to social and cultural issues affecting games, let's see what had the critics talking! We at Critical Distance have gone back over the last year and put together a compilation of what we feel best represents what has passed year. We compiled the most important, most memorable and most representative critical pieces of the year to give an idea of what 2014 was all about. Now, Critical Distance is proud to present the 2014 edition of This Year In Video Game Blogging! Every year, we have a section devoted to pieces that focused on the community that surrounds our medium.

Cyberformance Cyberformance refers to live theatrical performances in which remote participants are enabled to work together in real time through the medium of the internet, employing technologies such as chat applications or purpose-built, multiuser, real-time collaborative software (for example, UpStage, Visitors Studio, the Waterwheel Tap and other platforms). Cyberformance is also known as online performance, networked performance, telematic performance, and digital theatre; there is as yet no consensus on which term should be preferred, but cyberformance has the advantage of compactness. For example, it is commonly employed by users of the UpStage platform to designate a special type of Performance art activity taking place in a cyber-artistic environment. History and context[edit] 100 Things Personality Test - VisualDNA VisualDNA brings a new layer of information to the world of technology that will help bring it closer to the people who use it – making it more enjoyable and relevant. Technology provides businesses with a surfeit of DATA – what and when. However it provides very little in the way of UNDERSTANDING – who did things, and why they did them.

[Tutorial] How to Play MAME Roms in Windows This tutorial is dedicated to underground user Wolf13. Without his request, this tutorial would not have been written. Revisions: 4-7-09: Added youtube videos for XP and Vista. 1-31-10: Removed youtube video links so I can redo them. Wargaming A wargame, (also war game) is a strategy game that deals with military operations of various types, real or fictional. Wargaming is the hobby dedicated to the play of such games, which can also be called conflict simulations, or consims for short. When used professionally by the military to study warfare, "war game" may refer to a simple theoretical study or a full-scale military exercise. Hobby wargamers have traditionally used "wargame", while the military has generally used "war game"; this is not a hard and fast rule. Although there may be disagreements as to whether a particular game qualifies as a wargame or not, a general consensus exists that all such games must explore and represent some feature or aspect of human behaviour directly bearing on the conduct of war, even if the game subject itself does not concern organized violent conflict or warfare.[1] The business wargames exists too, but in general they are only role playing games based on market situations.

TSPDT - The 1,000 Greatest Films (Introduction) , the 1,000th ranked greatest film. INTRODUCTION to the 1,000 Greatest FilmsAs voted by 3,349 critics, filmmakers, scholars and other likely film types. Current Version: February 2014by Bill Georgaris Samsung DIVE Manage your device in a secure wayTrack and control your device remotely. Locate my mobile With the "Locate my device" function, you can locate your lost device with ease. Lock my mobile You can remotely lock your mobile so that no one else can use the device.

Best of 2014: The indie games we adore Gaming execs:Join 180 select leaders from King, Glu, Rovio, Unity, Facebook, and more to plan your path to global domination in 2015. GamesBeat Summit is invite-only -- apply here. Ticket prices increase on April 3rd! Check out all of our Best of 2014 coverage here and Worst of 2014 coverage here. Independent game development is the foremost frontier for exploring new ideas and concepts in a medium too often hampered by a need to retread the same ground. 2014 brought with it a surge in early access releases and the first big fruits of the crowdfunding craze, making the creation and release of these indie titles often as experimental or temperamental as their subject material. We waded through the releases of this past year and selected the 15 sharpest, most creative, and most addictive indie games of 2014, listed below in order of release date.

Deus Ex: Human Revolution - Graphics Study - Adrian Courrèges 2015/03/12: Back online after Reddit and Slashdot killed my bandwidth with 30,000 visits in the last hours. Followed by HN. 2015/03/11: Update with comments from Matthijs De Smedt. The original Deus Ex is among the most critically acclaimed PC games of its time and I spent countless hours helping JC Denton fend off the conspiracies of UNATCO or the Illuminati. I never had the chance to play the second opus “Invisible War”, but I gave a shot to “Human Revolution” when it was released.