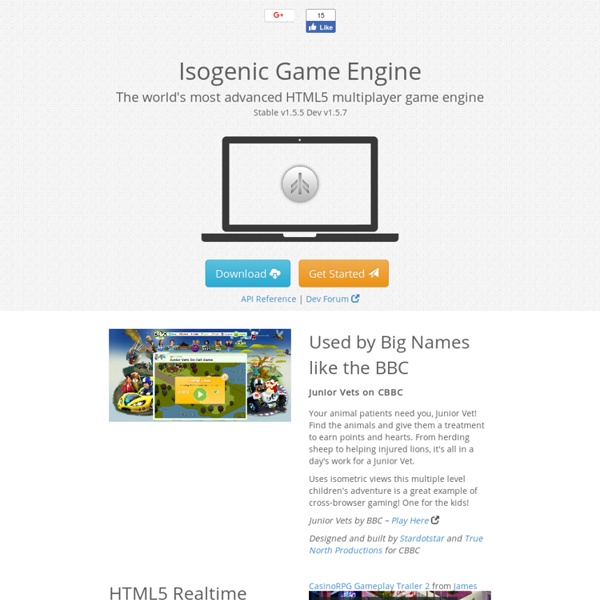 Create amazing 2D & isometric games with advanced realtime multiplayer features that run on browsers and mobile devices with a single code base. Isogenic Engine is the world’s most advanced 2D & isometric HTML 5 game engine with state of the art scene graph-based architecture and easy to use realtime multiplayer functionality, built entirely in JavaScript it runs on browsers, mobile devices and Node.js with a single API and code base. CasinoRPG by GoldFire Studios - Play Here CasinoRPG and GoldFire are trademarks of GoldFire Studios

CopperLicht - Open Source JavaScript 3D Engine using WebGL Open Source WebGL 3D engine with editor CopperLicht is a commercial grade WebGL library and JavaScript 3D engine for creating games and 3D applications in the webbrowser. It uses the WebGL canvas supported by modern browsers and is able to render hardware accelerated 3d graphics without any plugins. Crafty - How Crafty Works Crafty is a JavaScript game library that can help you create games in a structured way Key Features: Entities & Components - A clean and decoupled way to organize game elements. No inheritance needed! Canvas or DOM - Choose the technology to render your entities; it will look exactly the same. Eventbinding - Event system for custom events that can be triggered whenever, whatever and bound just as easily.

HTML5 and JavaScript Game Development Competition in just 13 kilobytes Package size below 13 kB All your code and game assets should be smaller than or equal to 13 kilobytes (that's exactly 13,312 bytes, because of 13 x 1024) when zipped. Your package should contain index.html file and when unzipped should work in the browser. deanm/pre3d @ GitHub Pre3d, a JavaScript 3d rendering engine Play with an application built using Pre3d, like GraphyCalc. See a demo like monster, colorscube, lorenz84, or gji. View technical samples like spin ring, textured cube, extruded sphere with normals, 3d cubic bezier spiral, or slink. Get the latest code from the git repository, as a zip file, or as a tarball. Keep in touch on the mailing list.

Quintus JavaScript HTML5 Game Engine a platfomer in ~80 lines of code, you can edit the code on the left. Click to focus, arrow keys to move. more A breakdown of the example is below. CocoonJS Performance is key to mobile web app and game development, and CocoonJS was designed from the ground up to accelerate all aspects of HTML5 execution. CocoonJS provides the best JavaScript and HTML5 execution environments to choose from, depending on the type of your project and the platforms you want to deploy it to. If your project is an HTML5 canvas game CocoonJS provides the most performant canvas 2D and WebGL implementation in the market for iOS and Android. This environment is a highly specialized JavaScript virtual machine with a blazing fast implementation of everything needed to make canvas 2D or WebGL based games scream on mobile! CocoonJS is the only platform to date that allows WebGL native app deployment in both iOS from version 5.0 and above and Android from version 2.3 and above.

JS3D: 3d Javascript Graphics Layer Click the cube to toggle animation Skip to: What is JS3D? JS3D is a library which allows you to have interactive 3d objects on your website, such as the spinning cube at the top of the page. The 3d effect is created using actual text, try selecting the text on the cube above! This is different from the approach of, for instance, these folks, who have made a better quality renderer, which is much more processor intensive. SVG animation: Rotating elements A few days ago, I wrote about creating a rotating 3D SVG cube, which involves using EMCAScript to redraw every line. However, simple two-dimensional transformations can be animated in SVGs with much less hassle using <animateTransform>. For example: The code for this animated square is The important points to note are:

A suite of Javascript libraries and tools designed for working with HTML5 Recent Updates Follow @CreateJS November 2014 Added Unit Tests to EaselJSUpdates in preparation for new releases (coming soon). New class model, with big performance increases DELIGHT ‐ Native to the Web Realistic Camera Model Demo This demo features a physically based camera which includes techniques like bokeh depth of field, glare, lens flares, film grain, dynamic color grading and more. It uses advanced techniques such as physically based shading, deferred rendering, HBAO and variance shadow mapping. Please select medium quality if your computer is not on the high-end. Play around with this DELIGHT Engine powered demo. P.S. Thanks to Crytek for the awesome sponza model.

Public Domain Art & Code Art & Code from the Game Released into Public Domain The collaborative, web-based, massively multiplayer game Glitch began its initial private testing in 2009, opened to the public in 2010, and was shut down in 2012. It was played by more than 150,000 people and was widely hailed for its original and highly creative visual style. The entire library of art assets from the game, has been made freely available, dedicated to the public domain.

Developers The SDK contains everything a developer needs to rapidly get their project going, polished and deployed, including: A complete version of the JavaScript Engine code is available for developers to browse and use during debugging. The Engine is completely modular allowing developers to select exactly what features they want to use, and modify or replace anything that isn't suitable for their game. The SDK includes a wide range of feature and code samples. The File API has changed Recently I have been touting how awesome and revolutionary the File API is through a few demo’s. After some feedback on webapps mailing list there have been some major changes to the API and how it works. I have updated my previous drag and drop upload demo to reflect the API changes, as of Firefox 3.6b3 the API supports both the original API and the updated one. The older model will eventually be dropped, it’s only in there for legacy purposes. To use the demo you will need Firefox 3.6 installed.

Free 2D Game Engine Rapid Results Blazingly Fast Development Engineered with stability, performance and care. Construct 2 is the rapid development tool you need. You need a tool you can rely on.