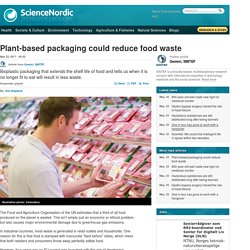 The Food and Agriculture Organisation of the UN estimates that a third of all food produced on the planet is wasted. This isn't simply just an economic or ethical problem, but also causes major environmental damage due to greenhouse gas emissions. In industrial countries, most waste is generated in retail outlets and households. One reason for this is that food is stamped with inaccurate "best before" dates, which mean that both retailers and consumers throw away perfectly edible food.

However, four years ago an EU project was launched with the aim of developing plant-based bioplastic packaging that not only extends the shelf life of foods, but also contains a sensor that notifies retailers and consumers of when the food inside is really no longer fit to eat. 'Green' plastic. "SodaStream" technique delivers low-cost, filter-free water purification. Most common water purification methods rely on mechanical filters or a membrane to remove contaminants. 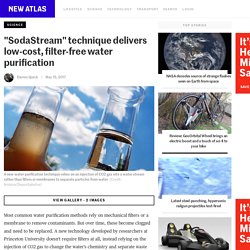 But over time, these become clogged and need to be replaced. A new technology developed by researchers at Princeton University doesn't require filters at all, instead relying on the injection of CO2 gas to change the water's chemistry and separate waste particles based on their electrical charge. Earth - The tree that shaped human history. Over 2,000 years ago, an important tree had one of its branches removed on the order of Indian emperor Ashoka the Great. 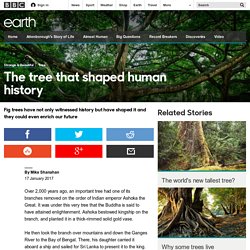 It was under this very tree that the Buddha is said to have attained enlightenment. Ashoka bestowed kingship on the branch, and planted it in a thick-rimmed solid gold vase. He then took the branch over mountains and down the Ganges River to the Bay of Bengal. There, his daughter carried it aboard a ship and sailed for Sri Lanka to present it to the king.

Robots Are Growing Tons of Our Food. Here's the Creepy Part. Armando Veve You don't see self-driving cars taking over American cities yet, but robotic tractors already roar through our corn and soybean farms, helping to plant and spray crops. 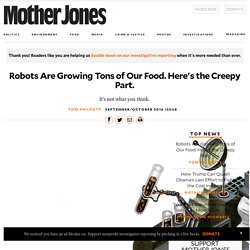 They also gather huge troves of data, measuring moisture levels in the soil and tracking unruly weeds. Honey bee brood – a good source of food? What do cultures in places such as Mexico, Australia and Thailand have in common? 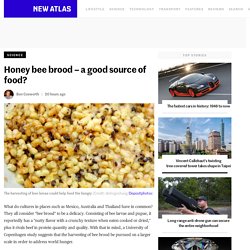 They all consider "bee brood" to be a delicacy. Consisting of bee larvae and pupae, it reportedly has a "nutty flavor with a crunchy texture when eaten cooked or dried," plus it rivals beef in protein quantity and quality. Cell to table: Device will let you start with plant cells, end with food. Let's face it. 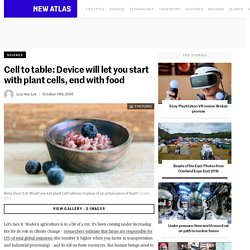 Modern agriculture is in a bit of a rut. It's been coming under increasing fire for its role in climate change – researchers estimate that farms are responsible for 13% of total global emissions (the number is higher when you factor in transportation and industrial processing) – and its toll on finite resources. But human beings need to eat and with the earth's population expected to exceed 9 billion by 2050, how are farmers supposed to feed the world without running the planet into the ground? Ramping up nitrogen flow kicks soybeans into overdrive. With an ever-increasing world population to feed, staple foods like legumes are only going to become more important. 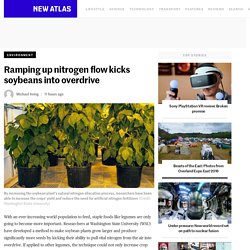 Researchers at Washington State University (WSU) have developed a method to make soybean plants grow larger and produce significantly more seeds by kicking their ability to pull vital nitrogen from the air into overdrive. Scientists: Deep-sea fish can solve world food shortages. Fishing the deep sea has great potential, but scientists warn that we should understand these ecosystems before we start fishing. 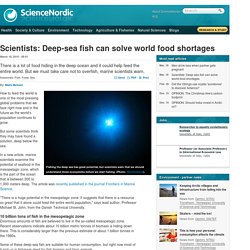 (Photo: Shutterstock). How to feed the world is one of the most pressing global problems that we face right now and in the future as the world’s population continues to grow. But some scientists think they may have found a solution, deep below the sea. In a new article, marine scientists examine the potential of seafood in the mesopelagic zone, which is the part of the ocean that is between 200 to 1,000 meters deep. The article was recently published in the journal Frontiers in Marine Science. Untitled. Algae: the future sustainable super crop. Johan Andersen Ranberg won the Ph.D. 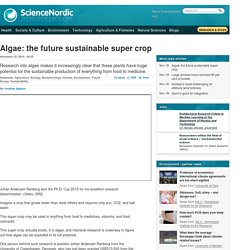 Cup 2015 for his excellent research dissemination. (Video: DR2) Imagine a crop that grows faster than most others and requires only sun, CO2, and salt water. "Magic" native Australian tobacco plant could be key to space-based food production. Scientists at the Queensland University of Technology (QUT) in Australia have discovered a gene in an ancient Australian native tobacco plant that they say is the key to growing crops in space. 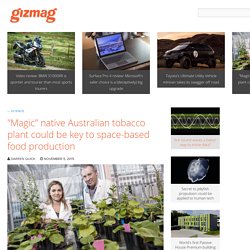 The plant, Nicotiana benthamiana, has long been used in labs around the world to test viruses and vaccines due to the fact it has no immune system. Surprisingly, this trait has also led to the plant being extremely resilient, which is where space-based food production comes in. Although the lack of an immune system leaves the plant prone to disease, it frees up energy that would otherwise be used for defense to be used to germinate and grow faster and produce bigger seeds. How to feed the world, with a little kelp from our friends (the oceans)

Paul Dobbins works on a farm that needs no inputs — no fertilizer, no pesticides, no water. Oh, and it doesn’t use any land either. This farm increases wildlife habitat simply by existing. Growing Underground farms greens in forgotten tunnels below London. The "world’s first underground urban farm" is set to start selling herbs and salads grown 33 m (108 ft) below the streets of London. Growing Underground is based in disused World War II tunnels. He Holds The Patent That Could DESTROY Monsanto And Change The World! If there’s anything you read – or share – let this be it. The content of this article has potential to radically shift the world in a variety of positive ways. And as Monsanto would love for this article to not go viral, all we can ask is that you share, share, share the information being presented so that it can reach as many people as possible. Freight Farms: How Boston Gets Local Greens, Even When Buried In Snow. Freight Farms are shipping containers modified to grow stacks of hydroponic plants and vegetables — anywhere, 365 days a year.

Courtesy of Freight Farms hide caption itoggle caption Courtesy of Freight Farms Freight Farms are shipping containers modified to grow stacks of hydroponic plants and vegetables — anywhere, 365 days a year. Africa's Ancient Plant Diversity And Seed Independence Still Under Threat From Proposed New Laws. How To Turn A "Dead" Lawn Into An Abundant Living Garden - No Digging Required - Walden Labs. Diaper-grown mushrooms to cut down waste. While their contents might be considered an environmental hazard by many, disposable diapers themselves pose a more significant problem for the environment. Tantalising tentacles: octopus could be the next big thing in aquaculture. A Food Crisis Follows Africa's Ebola Crisis. Tooth Tales: Prehistoric Plaque Reveals Early Humans Ate Weeds. The fish feed of the future grows in the woods. We have neither soy production nor extensive land area in Norway, but we do have a lot of natural gas and trees.

If Local Farms Aren't Local Enough, Buy From The Rooftop : The Salt. Six legs tasty: First edible insect farm opens in US - life - 23 May 2014. Read full article Continue reading page |1|2. Toshiba expands to food production with indoor vegetable factory. Toshiba's factory will be isolated from the outside air and have tightly controlled air and lighting systems, creating a sterile environment for the plants to grow Looking to take a bite out of the Japanese food market, electronics giant Toshiba has announced plans to construct a vegetable production factory in the city of Yokosuka. The Future Of Clean, Green Fish Farming Could Be Indoor Factories : The Salt.

An Innovative Plan To Reel In Sport Fishermen To Feed The Hungry : The Salt. How Food Hubs Are Helping New Farmers Break Into Local Food : The Salt. Hide captionMarty Travis (right) started the Stewards of the Land food hub in 2005. His son Will helps him transport food from local farms to area restaurants. A Smartypants Scientist Makes An Easy Analogy About Our Planet, And Now I'm Scared. They're Back! Chesapeake Oysters Return To Menus After Rebound : The Salt. Between Pigs And Anchovies: Where Humans Rank On The Food Chain : The Salt.

Fuel Your Body With Algae Headgear. Scientists: Use animal manure's stinking wealth of resources. Send in the Cows (or, How to Reverse Desertification, Build Soils, and Sequester Carbon) Making Food From Flies (It's Not That Icky) : The Salt. Replacing food: An engineer's approach to body fuel. Community Gardening: The Plot Against Hunger. New process could allow any plant to serve as a food source. Robotic Bees to Pollinate Monsanto Crops. Cheese waste can replace antibiotics in pig feed. Light can reveal salmon fillet. University of Sydney developing robots to automate Australian farms. From Exhausted Suburban LAWN to Supercharged Food System?