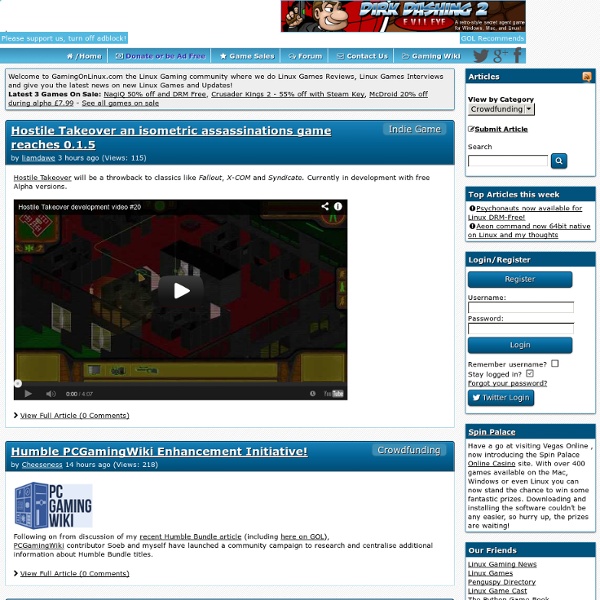 10 Best Linux Games for 2013 As we know, Linux has been liked by users but not by game lovers. But from some time developers are working over the task to create interesting games for Linux. And today, we’ve an astounding collection of Linux games. Such games are not only likable by the users but the game lovers also appreciating them too. Via this article we are presenting the collection of 10 Best Linux Games of 2013. This collection is completely provided for game lovers. If we talk about the most popular Linux games, Braid is the name which comes at first. Faster than light is totally dedicated to space mission game lovers. While watching this game for first time, you must consider it a simple game. Anodyne is the combo package of action and puzzle games. Battle of Wesnoth is considered as the most interesting and enjoyable strategical games. Penumbra series is set of three interesting games. While playing RPG games, character making is one of the most interesting part.

Play text adventures online Understanding Pac-Man Ghost Behavior Posted on December 2, 2010 It only seems right for me to begin this blog with the topic that inspired me to start it in the first place. Not too long ago, I came across Jamey Pittman’s “Pac-Man Dossier”, which is a ridiculously-detailed explanation of the mechanics of Pac-Man. About the Game “All the computer games available at the time were of the violent type - war games and space invader types. Pac-Man is one of the most iconic video games of all time, and most people (even non-gamers) have at least a passing familiarity with it. Every level of Pac-Man uses the same maze layout, containing 240 regular “food” dots and 4 energizers. Common Elements of Ghost Behaviour “Well, there’s not much entertainment in a game of eating, so we decided to create enemies to inject a little excitement and tension. Each of the ghosts is programmed with an individual “personality”, a different algorithm it uses to determine its method of moving through the maze. The Ghost House Target Tiles Scatter Mode

Play Carcassonne Check your security settings Connection issues are typically caused by security settings on your network or computer. Check that your firewall or router has port 5222 open and allowing traffic. If you are on a school or office network, you may need to contact your network administrator to make the necessary changes. Is your version of Flash current? Some old versions of Flash don't work well with our new chat application. Ad blockers and browser plug ins Ad blocker programs like AdBlock Plus, proxy software and a variety of other browser add-ons can prevent users from connecting to chat. Try again in a few minutes Sometimes the internet is just not happy. Did you lose an achievement? loading Yo Frankie! - Apricot Open Game Project - Yo Frankie! - Apricot Open Game Blog

Minecraft Minecraft is brilliant, and the Pi edition doubly so, its free and the API is absolutely genius, allowing you to alter the world in real-time. I have used the api to create a load of cools things, from a real-time clock to an operational cannon. Install Using the API API Tutorial - an in-depth view into Minecraft, the concepts, the API and how to program it, great for beginners API - The basics - an introduction into the Minecraft API, its functions and how to use it, great for those who already understand Minecraft & have some experience of programming Python API Reference - a detailed description and reference of the api python library - it documents all the functions available and gives example of how to use the library MinecraftStuff Extensions - I have started an extension library for the API to deliver simple functions, currently there is a drawing class for creating shapes and lines. Other resources If you looking for more learning resources on Minecraft: Pi edition, check out:

JJinuxLand: Drawing Sierpinski's Triangle in Minecraft Using Python In his keynote at PyCon, Eben Upton, the Executive Director of the Rasberry Pi Foundation, mentioned that not only has Minecraft been ported to the Rasberry Pi, but you can even control it with Python. Since four of my kids are avid Minecraft fans, I figured this might be a good time to teach them to program using Python. So I started yesterday with the goal of programming something cool for Minecraft and then showing it off at the San Francisco Python Meetup in the evening. The first problem that I faced was that I didn't have a Rasberry Pi. Between looking at the Minecraft Pi Protocol documentation and peeking at the mcpipy source code, it's pretty easy to figure out how to control Minecraft from Python. Here's the psuedocode for drawing Sierpinski's triangle: draw_the_three_vertices()current_point = random_point_in_triangle()while True: vertex = random_vertex() current_point = midpoint_between( current_point, vertex) draw(current_point) Here's the actual source code: #! The Gory Details

fogleman/Minecraft Python Programming with Minecraft Pi: Early Draft | arghbox When I first heard that Minecraft would be released for the Raspberry Pi I punched the air. The nice people at Mojang had just given me the perfect platform to teach students programming: a creative platform. One where students are encouraged to explore ideas in a familiar environment, while seeing the tangible results of their efforts. Minecraft Pi uses an application programmer interface (API for short) that allows programmers to interact with a Minecraft game world. Students can combine the API into their own Python programs to do things like place blocks, teleport the player or access hidden features like chat. For example they can create a castle with code in a few seconds, instead of building it by hand (which takes ages). That is why I have developed a book of resources to teach Python programming with Minecraft Pi. The Book Codecademy is my favorite resource for learning to program. The book is free to use and is open source. Any constructive feedback is very appreciated. Download

Adventure Game Studio | Forums | GNU/Linux Ports With the last linux port being in 2007, and the linux port being officially discontinued in december 2008, you probably thought it dead. Well, it ain't, since I took it over a little while ago. The new website I took off where Shawn stopped: AGS 2.72 - and took it a little further... AGS Linux Engine 2.72 - "The undead Pinguin rises" edition Just when you thought the damned pinguin was finally dead, he's back for more. AGS 2.72 Release Candidate 2AGS 2.72 Release Candidate 3, with static Allegro & Dumb libraries. All special paths point to /home/$username$/.ags/$gamename$ so your save games will end up there instead of where the executable is. AGS Linux Engine 3.1.2 SP1 - "The undead Pinguin eats your brain" edition AGS 3.1.2 beta 3 * The engine should work for both the 32-bit version of Ubuntu as well as the 64-bit version* Always start the game from a terminal! Grab the 2.72 video test game to see it working yourself. Running AGS games with WINE Install WINE. Segmentation Faults

Open Source RTS Game 'Widelands' Updated Widelands is an open source real-time strategy game inspired by Settlers II. In this game, you start out on a small piece of land with nothing more than a few of useful resources. Using those, you can build yourself an empire with many thousands of inhabitants. On your way towards this goal, you will have to build up an economic infrastructure, explore the lands around you and face enemies who are trying to rule the world just like you do. Game FeaturesFour Worlds (Tile Sets) (Greenland, Winterland, Blackland and Desert)Three Tribes (Barbarians, Imperials and Atlanteans)Several playable single player (tutorial) missionsMaps for single and multiplayer modeSave and load of single and multiplayer gamesAbility to build a settlement from scratchMilitary and warfare (Attacking, Training, defending, conquering of military buildings)A map editor, to build your own maps and campaigns A new version (build 17) of Widelands has been released bringing in lots of new features and fixes: Gameplay video:

The Humble Mobile Bundle (pay what you want and help charity) Download the Mod | The Dark Mod The Dark Mod can be installed in Windows and Linux. You no longer need Doom3 to install or play TDM. Install TDM on Windows As of 2.01 TDM can be installed wherever you like, but make sure you have read and write access to the folder!Download the TDM Updater (see below for alternate download locations)Extract the tdm_update.exe from the downloaded ZIP and copy it into your darkmod directory.Start the tdm_update.exe. The installer will connect to one of our download mirrors and start the download process.Be patient and wait. Install TDM on Linux Since there is no 64 bit version of The Dark Mod, on 64 bit systems you also need the 32 bit compatibility libraries installed. Install TDM on Mac OS X TDM 2.0 is not yet supported on Macs. Update TDM Installation To update a previously installed version of TDM, simply start the tdm_update.exe file in your darkmod folder. Troubles Installing? There is a more detailed Installation Guide on our Wiki. Mirrors