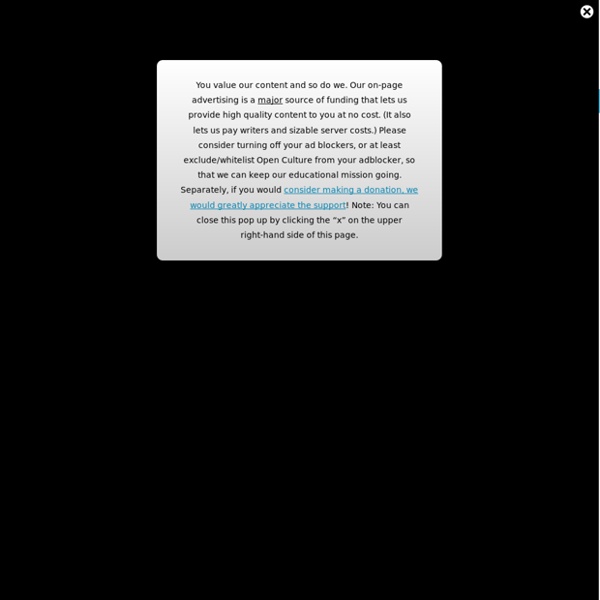 Andrei Tarkovsky (1932-1986) firmly positioned himself as the finest Soviet director of the post-War period. But his influence extended well beyond the Soviet Union. The Cahiers du cinéma consistently ranked his films on their top ten annual lists. Ingmar Bergman went so far as to say, "Tarkovsky for me is the greatest [director], the one who invented a new language, true to the nature of film, as it captures life as a reflection, life as a dream." And Akira Kurosawa acknowledged his influence too, adding, "I love all of Tarkovsky's films. I love his personality and all his works. Shot between 1962 and 1986, Tarkovsky's seven feature films often grapple with metaphysical and spiritual themes, using a distinctive cinematic style. You can now watch Tarkovsky's films online – for free. NOTE: If you access the films via YouTube, be sure to click "CC" at the bottom of the videos to access the subtitles. Would you like to support the mission of Open Culture? Related Content:

SketchUcation Community Forums Pilou wrote:"à la main" I think that'à la main' = by hand - you deliver a document by hand [i.e. it is in your hand] OR 'fait à la main' = hand-made [in English this phrase is normally reserved for things like food, clothes, furniture etc, but not in the general sense of 'manually' (manuellement) which is often used as the opposite of 'automatically'] - 'à la main' is a general usage and can be used in many case without misinterpretation, as it literally means 'at [the] hand' - so it is often used regarding anything relating to 'hands', BUT then'par la main' = by [the use of the] hand - you make a SKP mesh by hand - in the sense that you 'made it with your hand[s]' ['manually'] rather than making it ''automatically, perhaps using EEbyRails or Fredo's new gizmo [ you are unlikely to leave it at home ]etc etc

1,150 Free Movies Online: Great Classics, Indies, Noir, Westerns Advertisment Watch 1,150 movies free online. Includes classics, indies, film noir, documentaries and other films, created by some of our greatest actors, actresses and directors. Download Classic Japanese Wave and Ripple Designs: A Go-to Guide for Japanese Artists from 1903 Traditional Japanese art may please so many of us, even those of us with little interest in Japan itself, because of the way it inhabits the realm between representation and abstraction. But then, it doesn't just inhabit that realm: it has settled those borderlands, made them its own, for much longer than most cultures have been doing anything at all. The space between art, strictly defined, and what we now call design has also seen few achievements quite so impressive as those made in Japan, going all the way back to the rope markings on the clay vessels used by the islands' Jōmon people in the 11th century BC. Those ancient rope-on-clay markings can easily look like predecessors of the "wave patterns" still seen in Japanese art and design today. Since time almost immemorial they have appeared on "swords (both blades and handles) and associated paraphernalia (known as 'sword furniture'), as well as lacquerware, Netsuke, religious objects, and a host of other items." He "died in 1917.

Communication - Life Skills Resources Lesson: Communication styles This lesson is about different communication styles. It contains information about how to develop the valuable interpersonal skills involved in being an effective communicator. Download the lesson For fun: Communication Crossword Can you fit the communication words into the crossword puzzle? This Crazy Visual Symphony Is Like Being Inside a Computer, on Drugs The performance is scripted, but the performers on stage add their own flavor to the proceedings, like a musical performer. Ryoji Ikeda Microfiche, crossword puzzles, and Morse Code don’t sound like the makings of a compelling live performance, but in the hands of Japanese maestro Ryoji Ikeda, these mundane materials become the core of a dynamic audio-visual spectacle called Superposition. The hour-long performance is something like a high-tech rave with a year’s worth of high-school science class schizophrenically drawn upon as its raw material. Twenty small monitors sit on the front of a stage with one theater-sized screen stretching behind two performers. What plays out is a little bit like a frenetic, abstract version of the Eames film Powers of Ten.

Geometric Sand Sculptures by Calvin Seibert «TwistedSifter Nov 27, 2012 Using a variety of 3D geometric shapes such as prisms, pyramids, cylinders, spheres and cones; artist Calvin Seibert creates wonderful sand sculptures that are not quite ‘castles’ but much more than just randomly placed building blocks. On Flickr, you can find an entire 66-picture gallery of Calvin’s artwork which have all been washed away by the sea. Luckily for us, Calvin immortalized his pieces through photography so we can all enjoy his fantastic creations! [Colossal via Reddit] The Sand Master – Calvin Seibert

Hayao Miyazaki's Studio Ghibli Releases Free Backgrounds for Virtual Meetings: Princess Mononoke, Spirited Away & More To a degree that surpasses any other studio in animation history, Studio Ghibli has created a reality of its own. All of its fans around the world appreciate the artistry of its films, directed by such luminaries of Japanese animation as Hayao Miyazaki and Isao Takahata, and many appreciate it so fervently that they'd prefer to occupy any of Ghibli's worlds to this one. The studio has responded to their desires by not just continuing to produce motion pictures — the "retired" Miyazaki is now at work on his latest, How Do You Live? — but by authorizing a wide and ever-changing range of merchandise, and even building a museum outside Tokyo and a theme park outside Nagoya. Alas, like most museums, Ghibli's is temporarily closed.