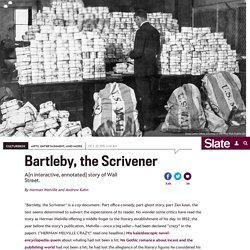 Part office comedy, part ghost story, part Zen koan, the text seems determined to subvert the expectations of its reader. No wonder some critics have read the story as Herman Melville offering a middle finger to the literary establishment of his day. In 1852, the year before the story’s publication, Melville—once a big seller—had been declared “crazy” in the papers.

(“HERMAN MELVILLE CRAZY,” read one headline.) His kaleidoscopic novel-encyclopedia-poem about whaling had not been a hit; his Gothic romance about incest and the publishing world had not been a hit; he had lost the allegiance of the literary figures he considered his allies; and he was dangerously low on money. But “Bartleby” is much more than a grave marker (if that) for Melville’s ambitions. In order to aid in your pursuit of the lost key to this locked, painted door, we provide you here with an interactive annotated text. The annotations are not comprehensive. Wall Street “How? Home. Politics And The English Language by George Orwell (1946) Most people who bother with the matter at all would admit that the English language is in a bad way, but it is generally assumed that we cannot by conscious action do anything about it. 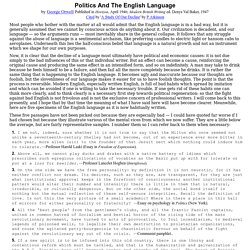 Our civilization is decadent, and our language — so the arguments runs — must inevitably share in the general collapse. It follows that any struggle against the abuse of language is a sentimental archaism, like preferring candles to electric light or hansom cabs to aeroplanes. Underneath this lies the half-conscious belief that language is a natural growth and not an instrument which we shape for our own purposes.

Now, it is clear that the decline of a language must ultimately have political and economic causes: it is not due simply to the bad influences of this or that individual writer. But an effect can become a cause, reinforcing the original cause and producing the same effect in an intensified form, and so on indefinitely. © Brandon K. Nobles - 2009-2016.

Issue 8: "The Fourth Friend" - A Short Story in: PRINT-ORIENTED BASTARDS. Secrets benefits of internal qigong cultivation. Addicted to Hate. Archive/IEET-03-PostGender.pdf. Ebook, Parents and Children, by George Bernard Shaw. Children as Nuisances Experienced parents, when children's rights are preached to them, very naturally ask whether children are to be allowed to do what they like. 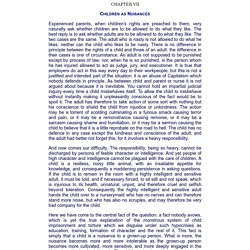 The best reply is to ask whether adults are to be allowed to do what they like. The two cases are the same. The adult who is nasty is not allowed to do what he likes: neither can the child who likes to be nasty. There is no difference in principle between the rights of a child and those of an adult: the difference in their cases is one of circumstance. And now comes our difficulty. Here we have come to the central fact of the question: a fact nobody avows, which is yet the true explanation of the monstrous system of child imprisonment and torture which we disguise under such hypocrisies as education, training, formation of character and the rest of it. Prev | Next | Contents. Noam Chomsky - What Uncle Sam Really Wants (e-book) "I Am a Strange Loop"/ Douglas R. Hofstadter. 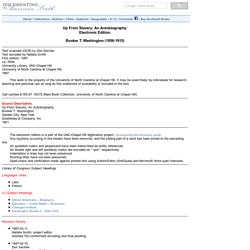 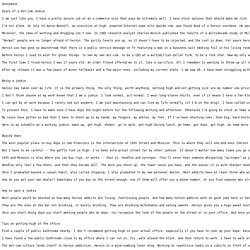 I have a pretty secure job at an e-commerce site that pays me extremely well. I have stock options that should make me rich. I have a hip apartment in Nob Hill. I have a cute girlfriend, who also works at a dot-com. And I have a healthy heroin habit. "The Metropolis and Mental Life " (pdf)