What's the best gift parents can give to their children? What is maturity? How do introverts enjoy life? The best sketches/drawings that you made during a class/lecture. What are some words of wisdom for men? Quora - The best answer to any question. What Will Happen if a Brahmin Eats Non-Vegetarian Food? « Let's share and care – Udaylal Pai. A question from my reader Amitabh Sharma: “Sir, I have seen lot of Brahmins eat non-vegetarian food. 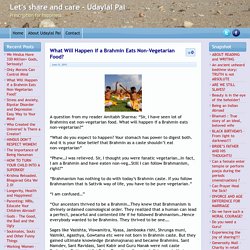 What will happen if a Brahmin eats non-vegetarian?” “What do you expect to happen? Your stomach has power to digest both. And it is your false belief that Brahmin as a caste shouldn’t eat non-vegetarian” “Phew…I was relieved. “Brahmanism has nothing to do with today’s Brahmin caste. “I am confused…” “Our ancestors thrived to be a Brahmin…They knew that Brahmanism is divinely ordained cosmological order. Sages like Vasishta, Viswamitra, Vyasa, Jambooka rishi, Shrunga muni, Valmiki, Agasthya, Gowtama etc were not born in Brahmin caste. All of them evolved to be Brahmin. Lord Krishna, who positioned Brahmins as supreme though his Baghvad Gita, was a backward caste Yadav. Try to figure out why for yourself, rather than swallowing the puked items (information) provided by the missionaries and communists.

Dhrona was a Brahmin, but he became a renowned Kshatriya. “janmana jaayate shudraha. (50) What is the best advice you can give to someone with a low CGPA? Pollution In China Is Out Of Control: 33 Shocking Photographs. With a newly-minted elite and an economic growth rate of over 10%, the environment has taken a backseat in China, the world’s most populous country. 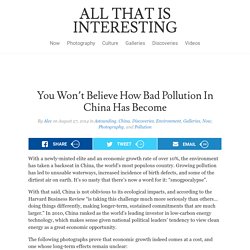 Growing pollution has led to unusable waterways, increased incidence of birth defects, and some of the dirtiest air on earth. It’s so nasty that there’s now a word for it: “smogpocalypse”. With that said, China is not oblivious to its ecological impacts, and according to the Harvard Business Review “is taking this challenge much more seriously than others… doing things differently, making longer-term, sustained commitments that are much larger.” In 2010, China ranked as the world’s leading investor in low-carbon energy technology, which makes sense given national political leaders’ tendency to view clean energy as a great economic opportunity.

The following photographs prove that economic growth indeed comes at a cost, and one whose long-term effects remain unclear: Trash collection and disposal is more of a luxury than a fact of life. (37) What are the best blogs for data miners and data scientists to read? (416) Studies and Studying: How do top students study? (358) What are some good books on machine learning? (358) Machine Learning: What are some good resources for learning about machine learning? Video Friday: Robotic Furniture, Pizza by Drone, and Series Elastic Snake Robot. Another Video Friday and still no Evan! 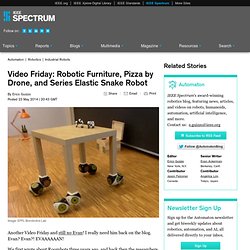 I really need him back on the blog. Evan? Evan?! EVAAAAAAN! We first wrote about Roombots three years ago, and back then the researchers at the EPFL Biorobotics Lab, led by Professor Auke Ijspeert, were just getting started with their self-assembling robotic furniture. . [ Biorobotics Lab ] via [ EPFL News ] Remember Hummingbird, the awesome educational robotics kit we said "every kid needs one"? [ Hummingbird Duo ] The World Cup starts next month, but humans are not the only ones playing in a soccer tournament in Brazil: Robocup takes place the following month in the town of João Pessoa, in the northeast part of Brazil. Thanks Olaf! [ Tech United ] I didn't know Robotis had unveiled its Darwin Mini, a smaller version of its Darwin-OP humanoid.

. [ Robotis ] via [ MAKE ] Another week, another drone stunt. . [ Francesco's Pizzeria ] via [ NDTV ] Speaking of stunts and drones. (339) Nerd Humor: What is the geekiest joke? (339) Procrastination: What are the best websites for NOT wasting your time? Video Friday: Robotic Furniture, Pizza by Drone, and Series Elastic Snake Robot. (335) Image Recognition: Which company has the best image recognition APIs in the market place today? My Big Fat Indian Bachelorhood. I hereby take this opportunity to declare myself an expert on weddings, seeing as how I’ve attended three in the last month, which involved about forty minutes of standing in line to congratulate rictus-stricken statues of what used to be my friends, followed by nine hundred hours in line at the buffet like refugees, clamouring for a plate of Jain-pizza-schezwan-dosa-pasta-souffle, and finally, having to think of 83957 silly responses when asked, “Beta, why aren’t you married yet?” 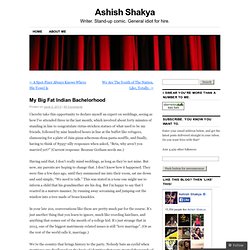 (Current response: Because Gotham needs me.) Having said that, I don’t really mind weddings, as long as they’re not mine. But now, my parents are hoping to change that. I don’t know how it happened. They were fine a few days ago, until they summoned me into their room, sat me down and said simply, “We need to talk.” In your late 20s, conversations like these are pretty much par for the course. We’re the country that brings history to the party. (332) I am in my late 20s and feel I have wasted a lot of time. Is it too late?

(331) Facts and Trivia: What are some of the most mind-blowing facts that sound like "BS" but are actually true? (331) Pratyush Rathore's answer to India: How do you explain working of futures and options in stock market to a layman? (331) What can I learn right now in just 10 minutes that could be useful for the rest of my life?

Related:  Quora - The best answer to any question   -  (332) Intelligence: What are the most productive ways to spend time on the Internet?   -  Education   -  Enterprise