House floor plans & architecture design services for you! Provide your project details via LIVE CHAT, in this form, or leave a comment, I will design a sketch in 20-30 minutes (if I do not have one ready-made). 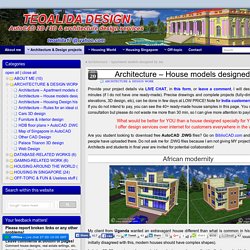 Precise drawings and complete projects (fully-dimensioned floor plans, elevations, 3D design, etc), can be done in few days at LOW PRICE! Note for India customers. If you do not intend to pay, you can see the 40+ ready-made house samples in this page. You can contact me for free consultation but please do not waste me more than 30 min, so I can give more attention to paying people. What would be better for YOU than a house designed specially for YOU? Are you student looking to download free AutoCAD .DWG files?

African modernity My client from Uganda wanted an extravagant house different than what is common in his country (houses with pitched roof). Home for JUN (Philippines) Do you dream a 4 bedroom house but you own just 70 sqm land? Nigeria narrow house 5-bedroom 300 sqm Terrace Modern 300+ sqm Home for Shwan (Iraq) Almost forbidden. 108_06 - Architecture Competition Results. Index of /ebooks/ How to Make the World’s Best Paper Airplanes. Neo-Calvinism. This article is about the Dutch Calvinist movement. 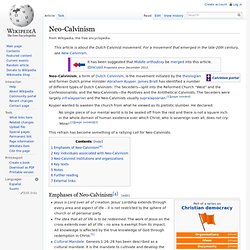 For a movement that emerged in the late-20th century, see New Calvinism. Neo-Calvinism, a form of Dutch Calvinism, is the movement initiated by the theologian and former Dutch prime minister Abraham Kuyper. James Bratt has identified a number of different types of Dutch Calvinism: The Seceders—split into the Reformed Church “West” and the Confessionalists; and the Neo-Calvinists—the Positives and the Antithetical Calvinists. The Seceders were largely infralapsarian and the Neo-Calvinists usually supralapsarian. [page needed] Kuyper wanted to awaken the church from what he viewed as its pietistic slumber. No single piece of our mental world is to be sealed off from the rest and there is not a square inch in the whole domain of human existence over which Christ, who is sovereign over all, does not cry: ‘Mine!’

This refrain has become something of a rallying call for Neo-Calvinists. Emphases of Neo-Calvinism[4][edit] Key texts[edit] Notes[edit] Fab Labs. Anonymous Animals in Google Drive. Google found a funny way to show the anonymous persons who open a document in Google Drive. 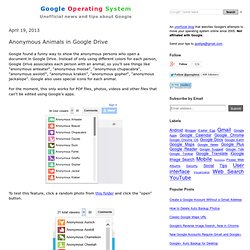 Google also uses special icons for each animal. For the moment, this only works for PDF files, photos, videos and other files that can't be edited using Google's apps. To test this feature, click a random photo from this folder and click the "open" button. { Thanks, Yu-Hsuan Lin. } 10 People You Probably Didn’t Know Were Black" Anatole Broyard was born in New Orleans in 1920 to light-skinned black parents, spent much of his childhood in a predominantly black Brooklyn neighborhood and then crafted a carefully constructed image devoid of his ethnic heritage. 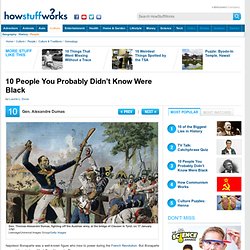 Broyard's light skin allowed him to join the segregated Army as a white man, where he led a battalion of black soldiers. Upon his discharge from the military, he opened a bookstore in New York City's Greenwich Village, ensconced himself in the literary landscape and eventually became a copywriter at an advertising firm. Although he wrote a few short stories that were met with critical acclaim, Broyard initially struggled to complete a full-length work.

The attention, however, helped him secure a job as a book reviewer with The New York Times in the early 1970s, a position he held for more than a decade. During this time, he became one of the most influential literary critics in the U.S. Kikuyu People: Secrets of an ancient migration from Egypt to Mount Kenya.