Who Won Science Fiction's Hugo Awards, and Why It Matters. Since 1953, to be nominated for a Hugo Award, among the highest honors in science fiction and fantasy writing, has been a dream come true for authors who love time travel, extraterrestrials and tales of the imagined future. 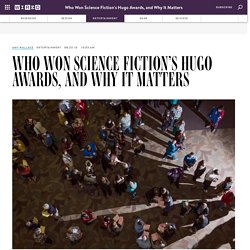 Past winners of the rocket-shaped trophy—nominated and voted on by fans—include people like Isaac Asimov, Arthur C. Slavoj Žižek on Greece: This is a chance for Europe to awaken. The unexpectedly strong No in the Greek referendum was a historical vote, cast in a desperate situation. 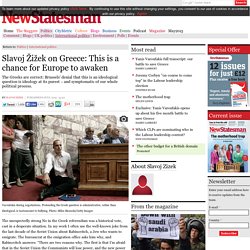 In my work I often use the well-known joke from the last decade of the Soviet Union about Rabinovitch, a Jew who wants to emigrate. The bureaucrat at the emigration office asks him why, and Rabinovitch answers: “There are two reasons why. The first is that I’m afraid that in the Soviet Union the Communists will lose power, and the new power will put all the blame for the Communist crimes on us, Jews – there will again be anti-Jewish pogroms . . .” “But,” the bureaucrat interrupts him, “this is pure nonsense. Nothing can change in the Soviet Union! Mark Zuckerberg recommends 'The Player of Games' Recommended Reading: Roku's plan to take on Apple, Amazon and Google. ‘I Don’t Believe in God, but I Believe in Lithium’ The Hunt for the Financial Industry's Most-Wanted Hacker. In any global outbreak, it’s important to identify Patient Zero. 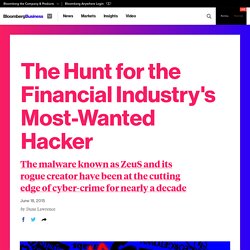 In the movies, you get a leggy Gwyneth Paltrow. In the nine-year online epidemic that helped create cybercrime as we know it, you get “fliime.” That was the name used by somebody who went on the online forum Techsupportguy.com on October 11, 2006, at 2:24 a.m., saying he’d found some bad code on his sister’s computer. “Could someone please take a look at this,” he wrote.

Fliime probably didn’t realize this was history in the making. Uk.businessinsider. Why Are Palo Alto's Kids Killing Themselves? The tracks near East Meadow Drive in Palo Alto, where multiple high school students have gone to die. (1 of 7) "I am not OK, and I ca n speak for many of my friends at school—we are not OK. 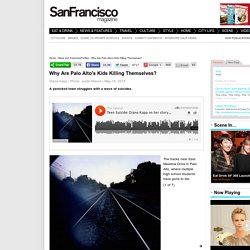 I want to feel comfortable at school. Will Art Save Our Descendants from Radioactive Waste? Before a world that trembled beneath the threat of nuclear holocaust, William Faulkner took the stage to accept his Nobel Prize for Literature. 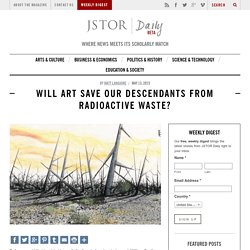 It was 1950. The Soviets had detonated their first atomic bomb a year earlier, and Truman had responded by announcing plans to build a bomb 500 times as powerful as the one that brought World War II to a terrifying close in Nagasaki. The Last Day of Her Life. Sandy Bem, a Cornell psychology professor one month shy of her 65th birthday, was alone in her bedroom one night in May 2009, watching an HBO documentary called “The Alzheimer’s Project.” 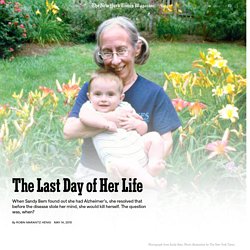 For two years, she had been experiencing what she called “cognitive oddities”: forgetting the names of things or confusing words that sounded similar. She once complained about a “blizzard” on her foot, when she meant a blister; she brought home a bag of plums and, standing in her kitchen, pulled one out and said to a friend: “Is this a plum? I can’t quite seem to fully know.” Is cosmology having a creative crisis? – Ross Andersen. One crisp day last March, Harvard professor John Kovac walked out of his office and into a taxicab that whisked him across town, to a building on the edge of the MIT campus. 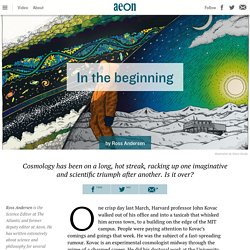 People were paying attention to Kovac’s comings and goings that week. He was the subject of a fast-spreading rumour. My Wife's Struggle With Cancer by Matt Teague - Mother's Day Cancer Essay. "Just tell her yes," he said. 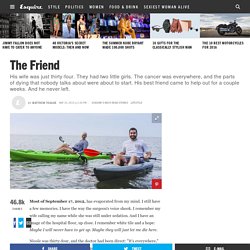 A sort of delirium set in. The Day Virginia Woolf Brought Her Mom Back to Life ‹ Literary Hub. The Man Who Became Big Bird. Photo courtesy of Debra Spinney Jessica Gross | Longreads | May 2015 | 13 minutes (3,430 words) Caroll Spinney has performed Big Bird and Oscar on Sesame Street since the show launched in 1969, almost half a century ago. 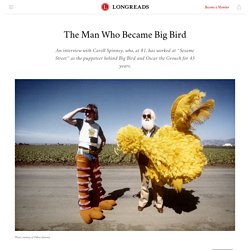 A new documentary, I Am Big Bird, follows Spinney’s journey from a somewhat difficult childhood—his father had abusive tendencies, and he was picked on in school—to becoming a childhood icon, not to mention a man in an almost absurdly happy marriage. Spinney’s wife, Debra, sat nearby (laughing and interjecting sporadically) as we discussed the film, the physical and emotional reality of playing these characters, and what kind of guy a grouch really is. Big Bird and Oscar made cameo appearances. Burma's Bizarre Capital: A Super-Sized Slice of Post-Apocalypse Suburbia. Driving through Naypyidaw, the purpose-built capital of Burma, it could be easy to forget that you’re in the middle of one of south-east Asia’s poorest countries. 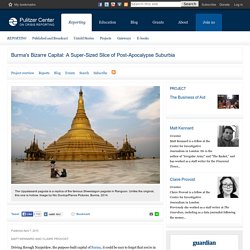 On either side of the street, a seemingly endless series of giant detached buildings, villa-style hotels and shopping malls look like they have fallen from the sky, all painted in soft pastel colours: light pink, baby blue, beige. The roads are newly paved and lined with flowers and carefully pruned shrubbery. Meticulously landscaped roundabouts boast large sculptures of flowers.

The scale of this surreal city is difficult to describe: it extends an estimated 4,800 square kilometres, six times the size of New York City. Everything looks super-sized. Death_in_space_the_ethics_of_dealing_with_astronauts_bodies. Courtesy of Warner Bros. Pictures This article is part of Future Tense, a collaboration among Arizona State University, New America, and Slate.

Product Review: Tefal Cuisine Companion + Recipes for 5 Seed Bread with Sous Vide Eggs, Homemade Focaccia, and Risotto Milanese. For a while, I’ve been sitting back, observing the Thermomix cult transform ordinary people into health-conscious, additive-free, real-food home cooks. These all-in-one kitchen machines have even made it into the professional kitchens of celebrated chefs including Rene Redzepi, David Chang, Adriano Zumbo, Tetsuya Wakuda and Peter Gilmore. I was thrilled when Tefal, a brand I very much adore, invited me to be a founding member of the Cuisine Companion Club which included my very own multifunctional Cuisine Companion kitchen wonder machine! For the Love of Lettering: Stories About Typography. I didn’t pay attention to font until I worked for my college newspaper. After months of poring over proofs in InDesign, I realized I was learning the differences between fonts, their specific names, where they fit best.

I’m no typographer—I don’t have the patience—but I’m fascinated by the subtle ways type entrances us and the absolutely grueling work that goes into its design and placement. Now, not only do I know the difference between type design and typography, but I try to make an effort to appreciate the work that goes in to the books I love, the gig posters for my favorite bands, the fonts on my blog. 1. “Praise the Colophon: Twenty Notes on Type.” Tech titans’ latest project: Defy death. Born in Germany and raised in Northern California, many of Thiel’s views on the future grew out of the science-fiction books and TV shows he loved while growing up.

Thiel cites Arthur C. Clarke’s “The City and the Stars,” the author’s first novel, published in 1956, as being particularly influential. Set 1 billion years into the future, it imagines life in a technologically advanced city full of people who live forever by being stored in a computer and downloaded over and over again into new bodies.

“I prefer the original ‘Battlestar Galactica,’ the original ‘Star Trek,’ ” Thiel said. He doesn’t like the dystopian turn that science fiction has taken in recent decades.” The Dolphin Trainer Who Loved Dolphins Too Much. How Washington Derailed Amtrak. Thirty-nine minutes into his southbound ride from Wilmington, Delaware, to Washington, D.C., Joseph H.