Mother of Darkness: Mind Control 101. The man in the photo, taken at McGill University in 1951, is 17-year-old Leonard Cohen. 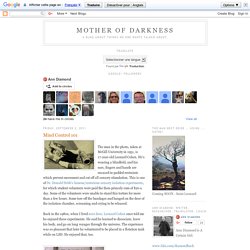 He's wearing a blindfold, and his ears, fingers and hands are encased in padded restraints which prevent movement and cut off all sensory stimulation. This is one of Dr. Donald Hebb's famous/notorious sensory isolation experiments, for which student volunteers were paid the then-princely sum of $20 a day. Some of the volunteers were unable to stand this torture for more than a few hours.

Some tore off the bandages and banged on the door of the isolation chamber, screaming and crying to be released. Back in the 1980s, when I lived next door, Leonard Cohen once told me he enjoyed these experiments. Order THE MAN NEXT DOOR We now know that D.O. In 1951, when this photo was taken, Leonard Cohen was 17, i.e. still a minor. Leonard Cohen went on to become a poet of note. McGill and Columbia happened to be co-epicenters of MKULTRA research into mind control.

And who called the meeting? No one ever did. Mother of Darkness: Mysterious Doctor Fischer. Another doctor who came to Canada from Nazi Germany is Dr. 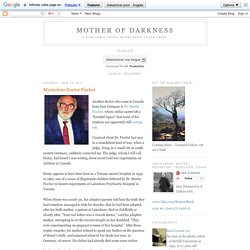 Martin Fischer, whose stellar career left a "harmful legacy" that some of his students are apparently still sorting out. I learned about Dr. Fischer last year in a roundabout kind of way, when a judge, living in a small city in south-eastern Germany, suddenly contacted me. The judge, whom I will call Henry, had heard I was writing about secret Cold war experiments on children in Canada. Henry appears to have been born in a Toronto mental hospital in 1959 or 1960, one of a series of illegitimate children fathered by Dr. When Henry was nearly 50, his adoptive parents told him the truth they had somehow managed to hide for decades: that he had been adopted, after his birth mother, a patient at Lakeshore, died in childbirth or shortly after. Anyone looking at Henry ought to have noticed he bore no resemblance whatsoever to the couple who had masqueraded as his parents all his life. Henry suggested I write about his story. Mengele’s Skull. The “era of testimony” began, by most accounts, with the trial of Eichmann in Jerusalem in 1961, the first major war crimes trial since Nuremberg and Tokyo and the crucible of all the great debates about international criminal justice and accounting for atrocities since.2 In the two chapters of The Juridical Unconscious devoted to Eichmann, Shoshana Felman argues that the new political agency of survivors as witnesses established at the trial was acquired not in spite of the fact that the stories they told were hard to tell, hear, or sometimes even to believe, not in spite of the fact that they were unreliable, but, paradoxically, precisely because of these flaws. 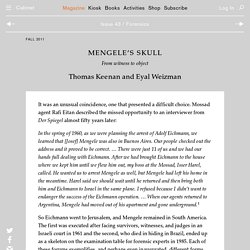 The case of Mengele, though—the path not taken and the trial that never happened—provides an instructive alternative to the story that seems to begin with Eichmann. Mother of Darkness: Dr. Mengele Comes to Quebec, 1949. These photos from a yearbook published in 1949 by Hopital Saint Michel Archange in Quebec city, were sent to me by a friend in Ontario. 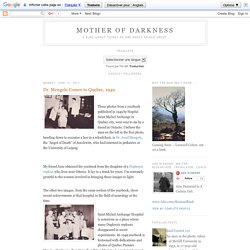 I believe the man on the left in the first photo, bending down to examine a boy in a wheelchair, is Dr. Josef Mengele, the “Angel of Death” of Auschwitz, who had interned in pediatrics at the University of Leipzig. My friend Jane obtained the yearbook from the daughter of a Duplessis orphan who lives near Ottawa. It lay in a trunk for years. I'm extremely grateful to the women involved in bringing these images to light. The other two images, from the same section of the yearbook, show recent achievements at that hospital in the field of neurology at the time. Saint Michel Archange Hospital is notorious as a place where many Duplessis orphans disappeared in secret experiments.

A bizarre discovery – but is it proof? I went to the Montreal Holocaust Memorial Centre with the photo of Dr. On the other hand, these experts could not prove it is not Mengele. Mother of Darkness: Misericorde Hospital. I have been researching and writing about the dark side of psychiatry particularly in relation to secret Cold War LSD experiments on children in Montreal at McGill and elsewhere across Canada. 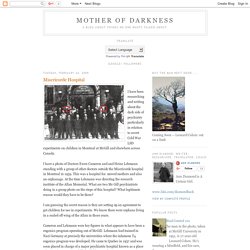 I have a photo of Doctors Ewen Cameron and and Heinz Lehmann standing with a group of other doctors outside the Misericorde hospital in Montreal in 1959. This was a hospital for. unwed mothers and also an orphanage. At the time Lehmann was directing the research institute of the Allan Memorial. What are two Mc Gill psychiatrists doing in a group photo on the steps of this hospital?

What legitimate reason would they have to be there? I am guessing the secret reason is they are setting up an agreement to get children for use in experiments. Josef Mengele, Angel of Death.